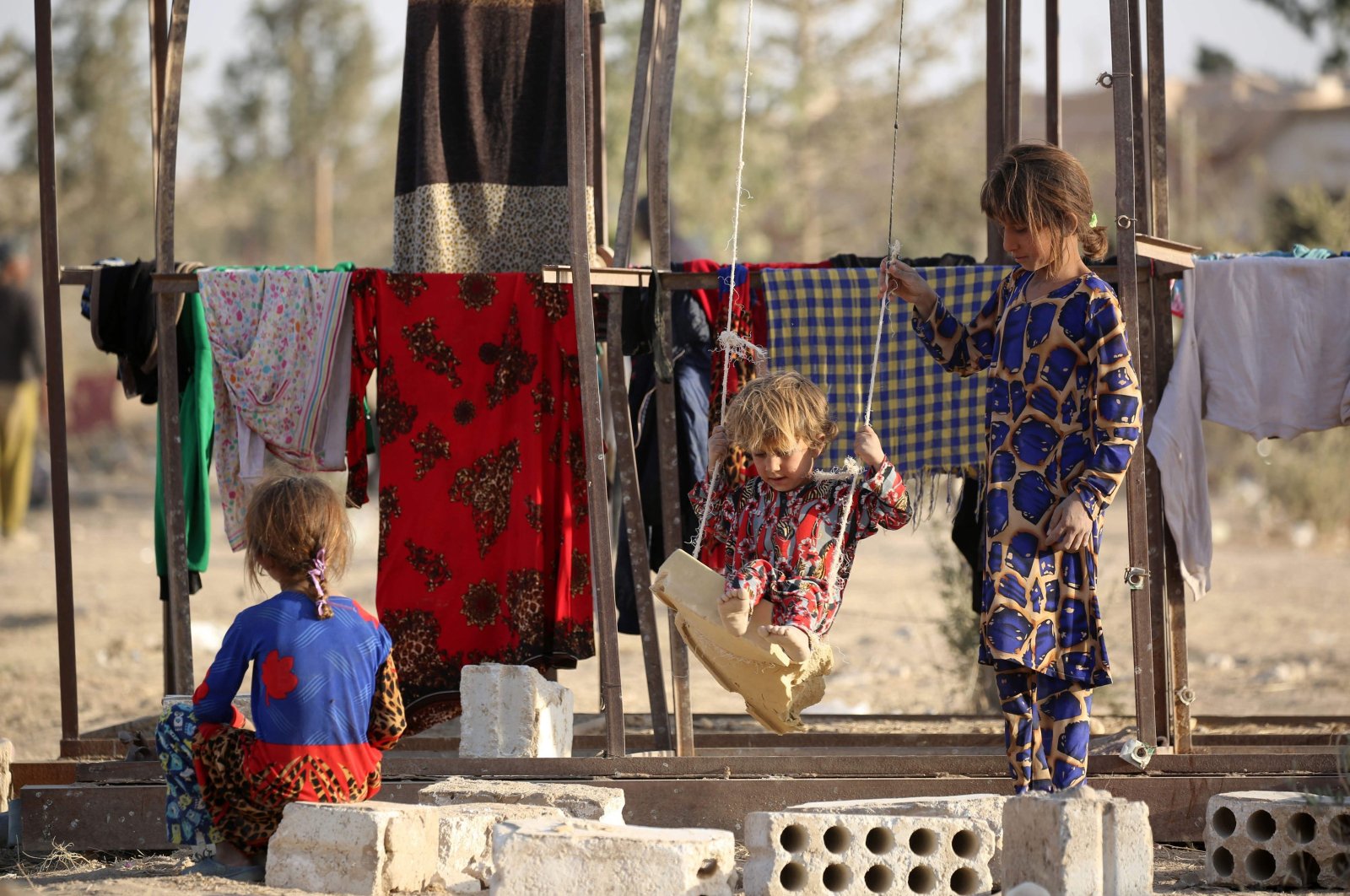 Human rights organization Amnesty International has called on governments to resettle thousands of children from filthy detention camps in northeast Syria, urging the global community to stop flouting obligations to uphold the rights of children to life, survival and development

Amnesty International called Tuesday for the repatriation of at least 27,000 children held in dire conditions at a camp run by the YPG terrorist group in northeastern Syria.

"Tens of thousands of children have been arbitrarily deprived of their liberty and exposed to life-threatening and inhumane conditions in al-Hol, northeast Syria’s sprawling camp, their future surrounded by grim uncertainty as governments continue to show a shameful lack of willingness to repatriate them," the London-based human rights organization said.

It underlined that over the past two years, children living in the camp have not had proper access to food, clean water and essential services such as health care and education.

"Increased child labor, violence and murder have severely impacted the growth and development of children," the statement said.

Referring to the interviews of 10 people with knowledge of the situation in the camps, including eight eyewitnesses, Amnesty International said the main section of the camp hosts Syrians and Iraqis, while the camp area known as the "Annex" – separated from the main camp by a checkpoint – hosts all women and children from third countries other than Iraq.

Children in the Annex are subjected to various forms of forced separation from their caregivers, it said. In went on to say that the camp administration over the past year has been arbitrarily detaining boys as young as 12 in the Annex, separating them from their mothers and caregivers. They also transfer the boys to detention centers outside of al-Hol camp that lack adequate access to food, water and health care and where diseases such as tuberculosis and scabies are rampant.

Children in the Annex as young as two are forcibly separated from their mothers or caregivers in order to be escorted to the hospital by the armed forces, it noted. According to the interviewed people, women and children cannot move out of the camp without prior approval, "which is rarely ever granted" by the camp administration.

The YPG's so-called Autonomous Administration of North and East Syria (AANES), must "immediately release all boys who have been arbitrarily detained and cease the practice of family separation and reunify as quickly as possible any child who remains separated from their parents or guardians,” said Diana Semaan, a researcher at Amnesty. The group added that under the Convention on the Rights of Children "no children should be deprived of his or her liberty arbitrarily and the detention of a child should be a measure of last resort and for the shortest appropriate period of time."

Men and women have "very limited access" to job opportunities in the camp, while the administration, which briefly allowed humanitarian organizations to employ men and women in al-Hol’s main camp, recently suspended the decision "for unclear reasons."

"The lack of livelihood opportunities for adults, coupled with inadequate access to safe spaces and education for children, have led to an increase in child labor," it added. The report emphasized that the camp administration’s failure to produce and implement a transparent and consistent security plan at the camp has led to a "climate of anger and fear" amid the pervasive violence.

According to the human rights organization Save the Children, some 79 people have been killed in the camp this year. At least three children were shot to death and 14 deaths of kids were "attributed to various incidents like fires."

“These unbearable conditions have taken a significant toll on children’s already-suffering mental health. Donors must ensure that humanitarian organizations have the needed funds to provide children in al-Hol and other camps in north-east Syria with psychosocial support,” said Semaan.

While some Syrians are granted permission to permanently leave the camp, a number of obstacles– such as fear of return to areas under the control of the Syrian regime, family separation, the reluctance of women to return without their male relatives who are either detained or missing and high transportation costs – bar their return to their homes, it noted.

"Due to insufficient funding, humanitarian organizations operating in northeast Syria are unable to provide protection services for Syrian children when they leave al-Hol camp, often exposing them to the risk of child trafficking, early marriage or recruitment by armed forces."

Amnesty International also highlighted that for Iraqi and "third national children," repatriation is their "only chance" of leaving the camp.

In its more than 30-year terrorism campaign against Turkey, the PKK – listed as a terrorist organization by Turkey, the U.S. and the European Union – has been responsible for the deaths of nearly 40,000 people, including women, children and infants. The YPG is the PKK's Syrian branch.

The YPG/PKK built the camp in April 2017 in al-Hol to keep civilians who fled clashes with the Daesh terrorist group in Deir el-Zour and also some Daesh members and their families. According to local sources, civilians detained by the terrorist group live in inhumane conditions in the camp.

Non-hygienic toilets and shower cabins, torn tents, expired food, a lack of medication for those with chronic illnesses and lack of patient care are some of the main problems at the camp.

The U.N. and nongovernmental organizations (NGOs) warn that the humanitarian situation in the camp is growing worse every day and have sought access to centers where Daesh militants are held.

According to a U.N. official, the camp was initially built to house up to 10,000 internally displaced people, but more than 73,000 individuals remain interred. The vast majority of those at the camp are women and children under the age of 12.

The U.N. Office to the High Commissioner for Human Rights (OHCHR) says some 60,000 Syrians, Iraqis and nationals from other troubled territories have been staying in the filthy camp since 2019 when the conflict with Daesh terrorist group ended. Among the people living in the camp are people with alleged links to the Daesh organization, however, thousands of people have no links to the group whatsoever.

“Governments must stop flouting their international human rights obligations to uphold these children’s right to life, survival and development and promptly repatriate them as a matter of urgency," Semaan said.