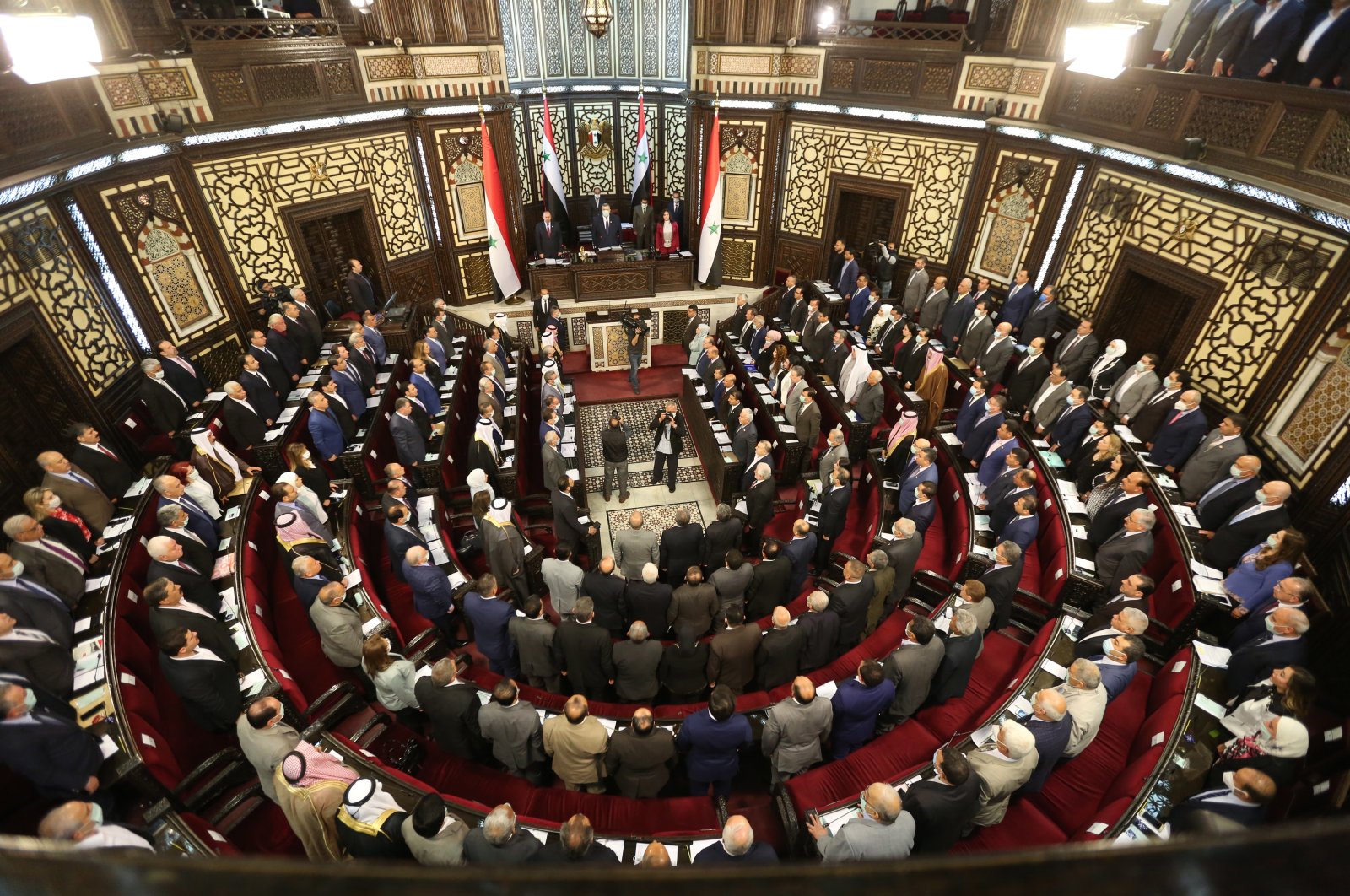 A general view of members of the Syrian parliament attending an extraordinary session in Damascus, Syria, April 18, 2021. (EPA Photo)
by DAILY SABAH May 03, 2021 12:44 pm
RECOMMENDED

Syria’s Bashar Assad issued a decree Sunday authorizing the release of prisoners, including those convicted of misdemeanors or complicity in acts of "terrorism" as the Syrian regime’s presidential election looms.

The so-called general amnesty comes weeks before the May 26 presidential election, the second such polls since the start of the country's decadelong civil war. Assad is widely expected to secure a fourth term.

The SANA, the regime's news agency, published the decree but did not say how many prisoners would benefit.

The amnesty stipulates that pardons will be granted to prisoners convicted of crimes committed before May 2, 2021, including acts of “terrorism.”

"Terrorism" is a term used by Damascus to encompass acts carried out by opposition forces and anti-regime activists.

But suspects convicted of "terrorist" acts that led to deaths would not benefit from the amnesty, according to the text of the decree published by the regime's news agency.

Drug traffickers, smugglers and those convicted of tax evasion could benefit from the amnesty under certain conditions, namely if they agree to pay a fine, according to the text.

Also included in the amnesty are army deserters who turn themselves in within three months – if they are in the country – or within six months if they are abroad, it added.

Prisoners with incurable diseases over the age of 70 and kidnappers who agree to set their hostages free within 10 days would also be eligible.

In 2014, after securing a new term in a controversial election conducted only in regime-controlled areas, Assad likewise issued an amnesty.

Since then, regime forces have clawed back swathes of territory from the opposition and terrorist elements with military help from regime allies Russia and Iran.

But large parts of Syria still escape regime control and polling will not take place in those areas. They include the northwestern province of Idlib, the last opposition bastion.

For years, the Bashar Assad regime has ignored the needs and safety of the Syrian people, only eyeing further gains of territory and crushing the opposition. With this aim, the regime has for years bombed vital facilities, including schools, hospitals and residential areas, causing the displacement of almost half of the country’s population while adopting policies to make their lives more difficult.

Syria's war has killed more than 380,000 people and displaced millions since it started in 2011 with the repression of anti-regime protests.

The Syrian opposition recently stated that it rejects the upcoming presidential elections in the war-torn country and called on Syrians living under regime-controlled areas to boycott the polls.

Turkey, the United States and European Union countries have similarly rejected the elections.