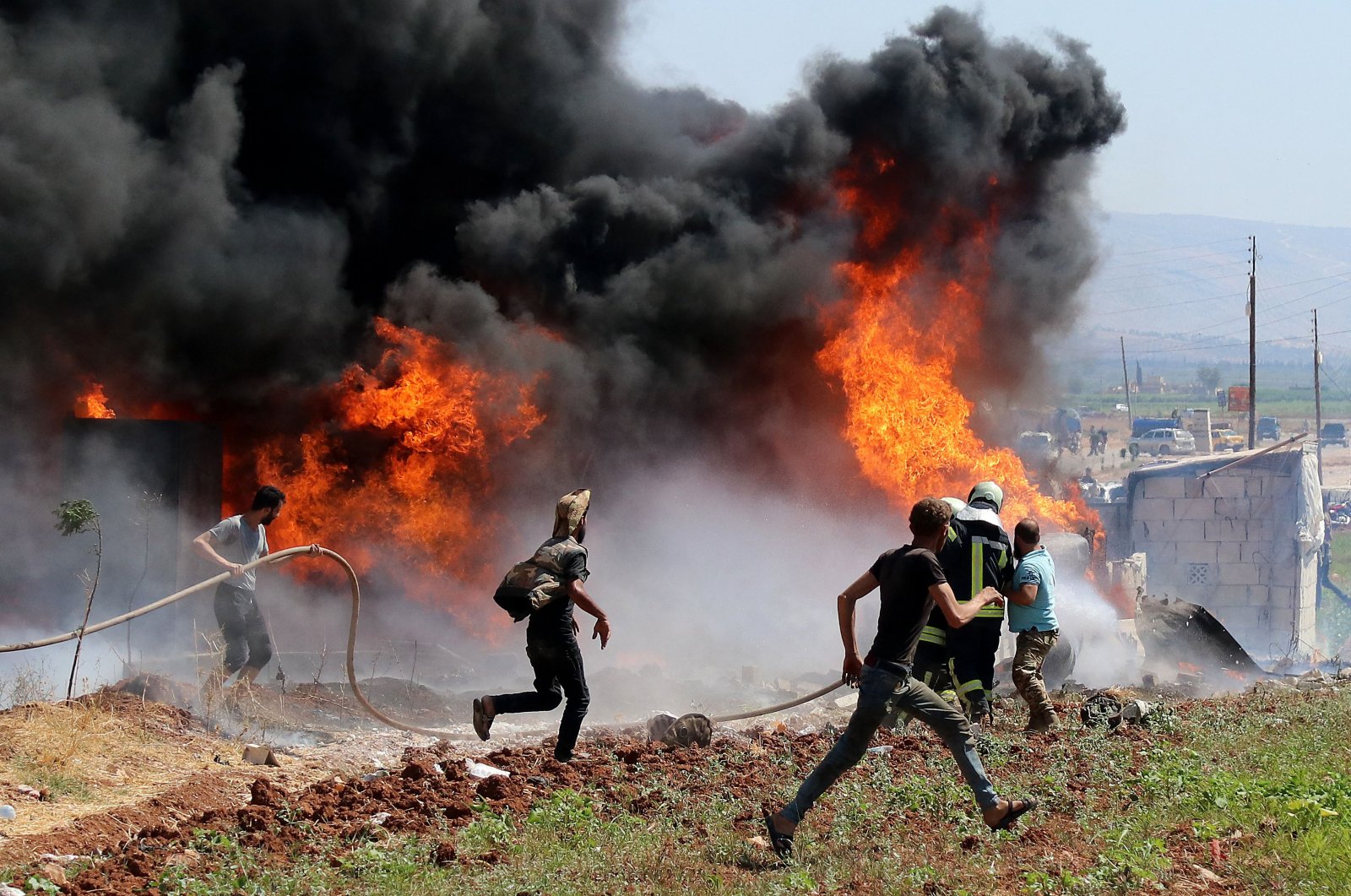 Civilians and members of the White Helmets rush to put out a fire caused by reported artillery bombardment by Syrian regime forces in northern Afrin, Syria, Aug. 18, 2021. (AFP Photo)
by DAILY SABAH
Aug 26, 2021 11:24 am

The conflict in Syria is far from over, the United Nations' chief mediator recently told the Security Council as Russia and the regime continue their attacks on civilians

At least 116 civilians, including 45 children and 20 women, were killed by the Bashar Assad regime and its ally Russia in northwestern Syria since June, a Syrian civil defense group said late Wednesday.

“From early June to today, White Helmets teams have documented the deaths of 116 civilians, including more than 45 children and 20 women. All of them were killed by the regime and Russian attacks on NW Syria,” the White Helmets wrote on Twitter.

A day earlier, the group had warned that Russian warplanes have renewed their airstrikes on northwestern Syria’s Idlib province – the last opposition bastion in the war-torn country.

A cease-fire deal brokered by regime ally Russia and Turkey has largely protected the region from a new regime offensive since March 2020. Turkey and Russia support rival parties in Syria’s 10-year conflict.

Nearly 75% of the total population in northwestern Syria's opposition-held Idlib region depends on humanitarian aid to meet their basic needs as 1.6 million people continue to live in camps or informal settlements, the United Nations Office for the Coordination of Humanitarian Affairs (OCHA) said.

Most recently, U.N. special envoy for Syria, Geir Pedersen, Tuesday told a U.N. Security Council (UNSC) briefing that although over the past 17 months there has been relative calm, escalations have increased recently.

“These developments remind us that the conflict in Syria is far from over,” Pedersen underlined, “and that we need a credible political process as well as more sustained international cooperation.”

Progress toward resolving Syria’s decadelong conflict has reached an impasse, Pedersen said, as an uptick in fighting throughout the country led to some of the largest civilian displacements in a year.

“We repeat our calls on all parties to end the violence immediately ... safe and unimpeded humanitarian access is needed to all affected areas and communities,” he urged.

For years, the Assad regime has ignored the needs and safety of the Syrian people, only eyeing further territorial gains and crushing the opposition. With this aim, for years the regime has bombed civilian facilities including schools, hospitals and residential areas, displacing almost half the country's population.

The war in Syria has killed nearly 500,000 people and displaced millions since it started in 2011.

On the political front, the envoy said his office is working to facilitate the convening of a sixth session of the 45-member Constitutional Committee, also known as the "Small Body."

The U.S. and several Western allies have accused Bashar Assad of deliberately delaying the drafting of a new constitution to waste time until presidential elections this year and avoid U.N.-supervised voting as called for by the UNSC.

A council resolution adopted in December 2015 unanimously endorsed a road map to peace in Syria that was approved in Geneva on June 30, 2012, by representatives of the U.N., the Arab League, the European Union, Turkey and all five permanent UNSC members – the U.S., Russia, China, France and Britain.