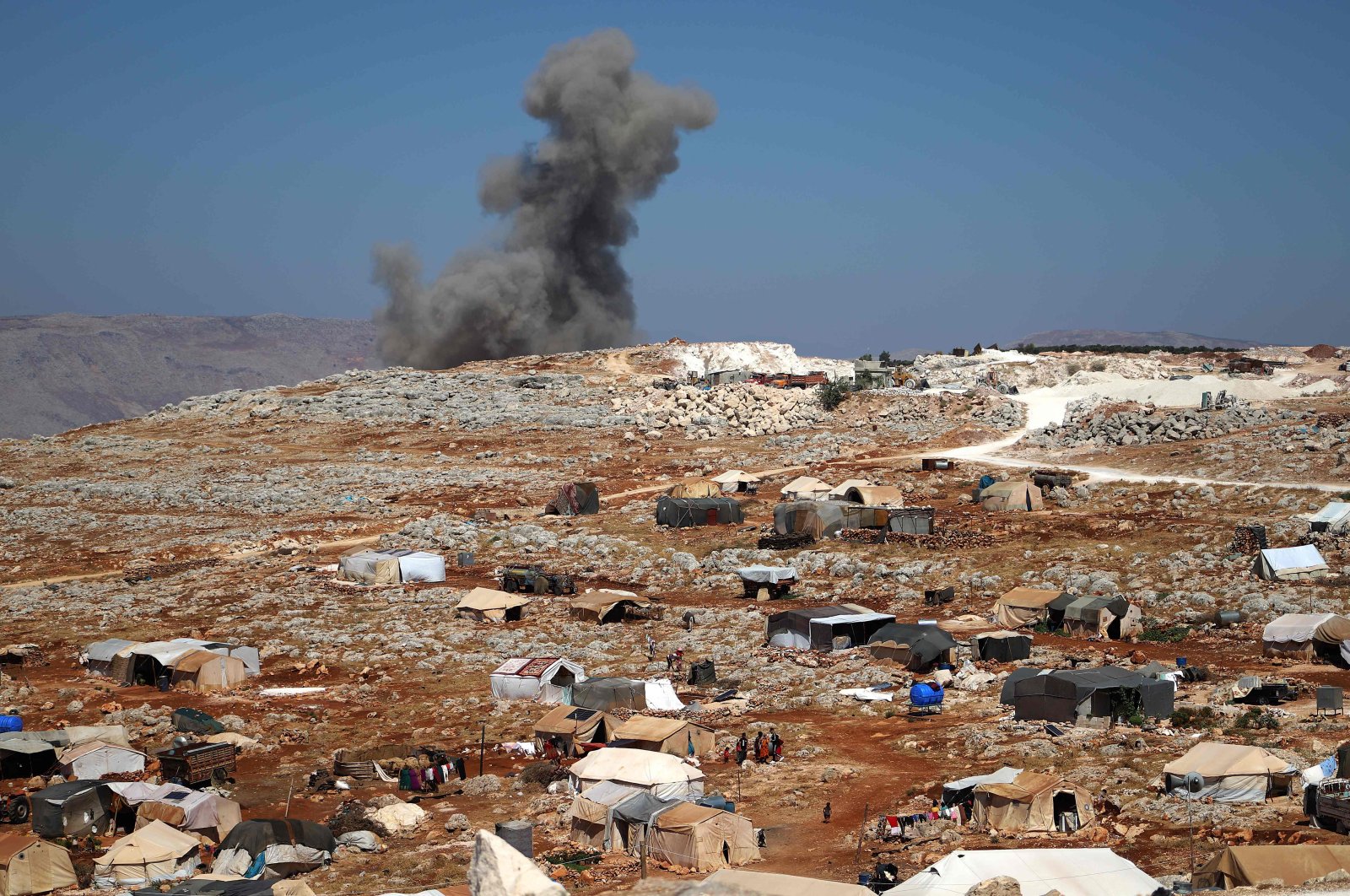 A plume of smoke rises behind a hill, where internally displaced Syrians have set up tents, during reported airstrikes by pro-regime forces, north of the opposition-held city of Idlib, Syria, Aug. 20, 2021. (AFP Photo)
by DAILY SABAH WITH AGENCIES Aug 25, 2021 9:39 am
RECOMMENDED

"Russian warplanes targeted civilian houses and a poultry farm in Kafrmid village, west of Idlib,” the White Helmets said, adding that rescue teams urged for help and no casualties had taken place.

U.N. special envoy for Syria Geir Pedersen told a U.N. Security Council (UNSC) briefing that although over the past 17 months there has been relative calm, escalations have increased recently.

Pedersen also touched on the situation in northeast Syria saying: “In the northeastern areas of Raqqa and Hassakeh we have seen further violence involving non-state armed groups. This has resulted in casualties, including among civilians.”

Dozens of people have been killed this year in a refugee camp housing families of Daesh terrorists in northern Syria, a senior U.N. official said Tuesday.

Martin Griffiths, the under-secretary-general for humanitarian affairs, told the UNSC that 69 people have been murdered at the al-Hol camp since January, while 12 attempted murders have also taken place.

About 59,000 people remain at the camp with one in five being younger than 5, according to U.N. figures. The United States has urged countries to repatriate their nationals who remain at the camp, but little momentum has occurred.

"We must not abandon them to the violence and the hopelessness of al-Hol," Griffiths said of the thousands who remain.

Syria’s southern Daraa is another area that has seen increasing violence recently. Russian forces moved into an opposition enclave in the Syrian city of Daraa Tuesday to try to avert an army assault on a stronghold that has defied regime authority since it was retaken three years ago, witnesses, residents and army sources said.

Their entry brought a halt to shelling by pro-Iranian army units who have encircled the enclave, where protests first erupted in 2011, and had attempted to storm the area Monday in the latest drive to force former opposition forces to surrender.

The regime army, aided by Russian air power and Iranian militias, in 2018 retook control of the province of which Daraa is the capital and borders Jordan and Israel's Golan Heights.

Local officials and army sources said the Iranian-backed army units have been pushing for a major new offensive.

On Tuesday, dozens of Russian military police were seen patrolling neighborhoods of Deraa al-Balad – the center of the first peaceful protests against Assad family rule, which were met by force before spreading across the country.

Pedersen warned the UNSC of a pressing need for humanitarian assistance.

"We repeat our calls on all parties to end the violence immediately," he said.

"Immediate, safe and unimpeded humanitarian access is needed to all affected areas and communities, including Daraa al-Balad," Pedersen urged.