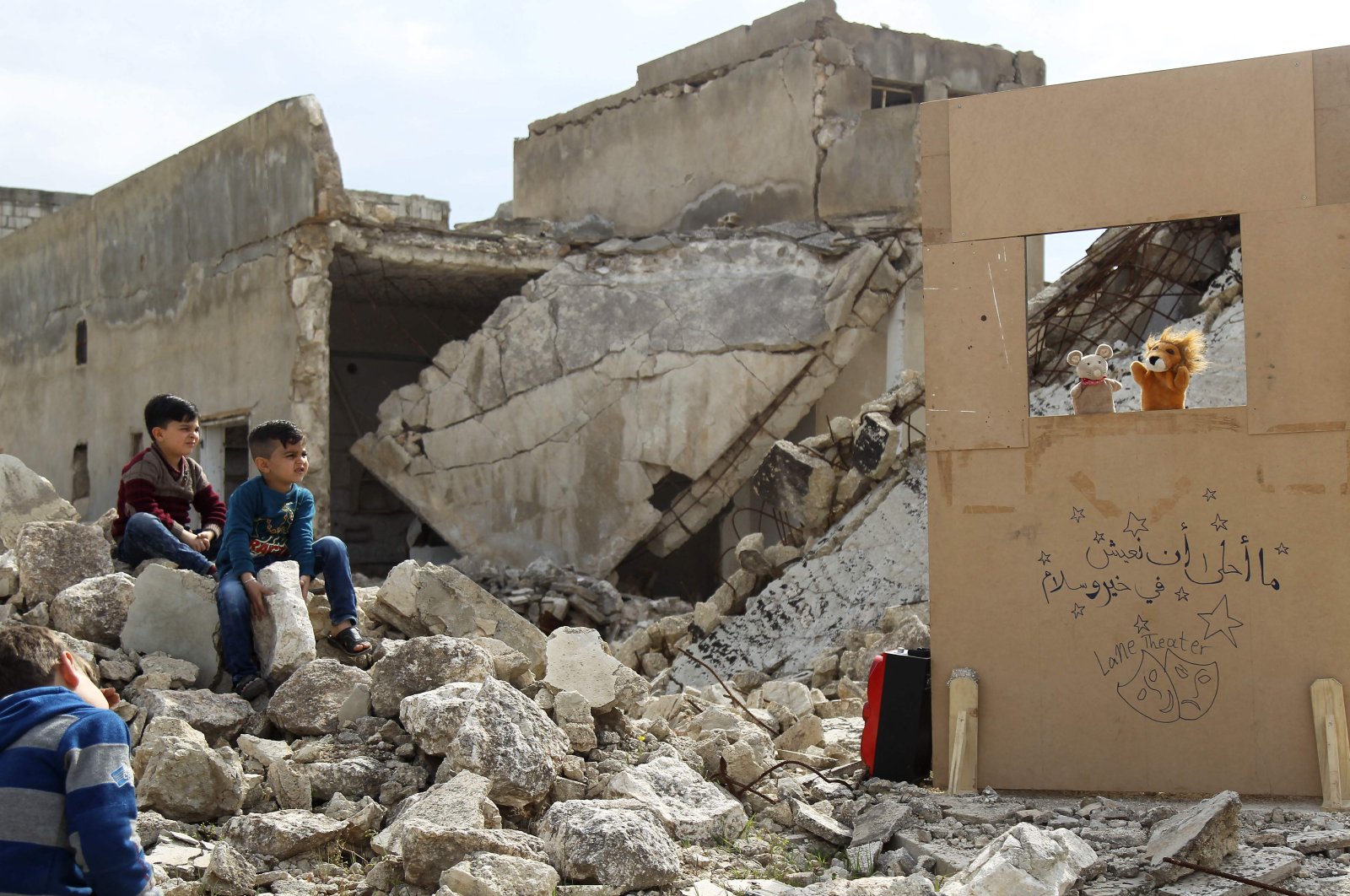 Children watch a puppet show performed by a Syrian actor, through a makeshift puppet theater set up among the rubble of collapsed buildings in the town of Saraqib in the opposition-held northern Idlib province, March 27, 2019. (AFP Photo)
by daily sabah with afp Mar 10, 2021 11:41 am
RECOMMENDED

Five-year-old Mohammad, 6-year-old Areej and 10-year-old Dalaa 10 are Syrian refugees in Turkey who have inherited a yearning for a country they know little to nothing about.

Mohammad and his parents, Maher Imadedine and Rawan Sameh, originally from Syria’s northern Aleppo, are among the 450,000 Syrians who have settled in the frontline Turkish city of Gaziantep, where the couple wed.

The little boy says he wants to "return" to Syria even though he has never stepped foot there in his life.

"Because it is beautiful, Syria," he says with a slight lisp. "Mum and dad told me so."

More than 3.6 million Syrians have found shelter from the decade-long conflict in neighbouring Turkey, including around 1.5 million children under the age of 15, according to official figures.

'When Assad is in prison'

Mohammad's mother has secured a job teaching Arabic at Gaziantep University and his father works for a charity.

Although settled in a relatively upscale neighborhood, they still have their minds set on returning to Syria, where they joined demonstrations against Bashar Assad's regime at the start of the revolt.

Asked when that might be, the little replies, "When Bashar Assad is in prison. I don't like him because he kills people and puts them in jail."

Mohammad says he learned about these things from his parents.

"He has also seen it on television," his mother cuts in. "He watches the news with us. Some things are beyond him, but he gets a general idea of what Syria is going through."

The mother fears the pictures of destruction unleashed by the Syrian forces arouse "a desire for revenge in the little ones."

"Our role as parents is to channel these feelings into positive energy that can be used to help reconstruct the country," she says.

Six-year-old Areej Beidun had not yet been born when her father, who joined opposition fighter ranks, was killed in Aleppo.

Since she was 4 months old, she has been living in a Gaziantep apartment with her grandparents, uncles and their families – 13 people in all.

Her mother has since remarried, and in Areej's world, "mum and dad" are her grandparents, who have been taking care of her.

With a mischievous eye and her hair pulled back by a golden Alice band, Areej speaks of Syria with an eloquence that belies her age.

"Over there, there is war everywhere. There are a lot of planes and bombs blowing up the city," she explains.

"Here, when I see dolls in the market, I ask mum to buy them for me, and she says 'no' because we don't have any money," she laments.

"I would like Syria to be the way it was before, without bombs, so that I could go back."

Born 45 days before the start of the revolt, she was 15 months old when her parents fled Aleppo.

But she talks about the Syrian city as if she has lived there her whole life.

"I want to go back to Aleppo to find my home, my neighborhood and my loved ones. I wish Assad would die so we could come back," she says.

Himself a refugee, Mahmoud Al-Wahab, 14, presents a children's radio programme called "I want to play" on Rozana, a Syrian radio station with offices in Gaziantep and Paris.

"We try to instill this attachment but in an indirect way," he says.

"We broadcast information about children in Syria but also the situation in Syria and how it was before. We also talk about the Arabic language to help the children keep their mother tongue," he says in his radio studio.

The station's director, Lina Chawaf, thinks "the dream of returning stays alive" even among those who manage to successfully integrate into their host countries.

"Parents instill their children with a nostalgia for their home, their land, their country," she says.

"As for us (at the radio station), we try to maintain it through culture, through the riddles and games that we played when we were in Syria."

The station's morning presenter, Nilufer al-Barrak, says he has agreed with a few of his listeners to meet up in Syria – one day.

"I asked the listeners to describe their neighborhoods in Syria, and everyone talked about how beautiful theirs was," the presenter says.

"So we agreed that when we return, we will invite each other over to our houses and see the places we talked about on air. And if they have not been rebuilt already, we will rebuild them together."

However, even though many refugees dream of returning one day, the situation after a decadelong war in the country has done nothing but worsen as the people face a severe economic meltdown as well as the challenges of COVID-19 for which Syria is not prepared because most of its health infrastructure was destroyed in the conflict.

Young Syrians have suffered heavy personal losses in a decade of war and still have to face rebuilding their shattered homeland, the International Committee of the Red Cross (ICRC) said on Wednesday.

A new ICRC survey of 1,400 Syrian nationals living in Syria or in exile in Lebanon and Germany highlights the costs for those aged 18-25 of a war that killed hundreds of thousands, displaced millions more and destroyed schools and hospitals.

"One of the shocking results of this survey is that we realized that 50% of Syrians had friends or a family member who was killed... One out of six Syrians had one of their parents either killed or wounded," Fabrizio Carboni, the ICRC’s regional director for the Middle East, told Reuters.

"These young people are now facing their second decade of this agonizing crisis. What is so poignant about their situation is that, having lost much of their childhood and teenage years to the violence, this generation will likely shoulder much of the responsibility and work of reconstruction," he said.

The report coincides with the 10th anniversary of the start of protests against Assad's rule that turned into a full-scale civil war. Assad's military has now regained control of most of the country with Russian and Iranian help.

Nearly half of young Syrians have lost their income because of the conflict and almost eight in 10 have reported struggling to afford food and other necessities, the report showed.

"Women have been particularly hard hit economically, with almost 30% in Syria reporting no income at all to support their family," the ICRC said.

It added that "despite everything, most young Syrians surveyed said they are optimistic about the future."

"Their hopes and ambitions for the next decade are universally recognisable: safety and stability, a chance to have a family and a well-paid job, affordable and accessible healthcare and services, and an end to the upheaval and conflict," the ICRC stated further.

Save the Children's regional director, Jeremy Stoner, on Tuesday said: "This 10-year war has cost Syria's young people their childhoods.”

More than 8.5 million Syrian children are dependent on assistance inside Syria and in neighboring countries, says the United Nations child agency UNICEF.

Up to 60% of children are unable to consistently access or afford adequate food inside Syria, and more than half are missing out on school, the U.N. says.