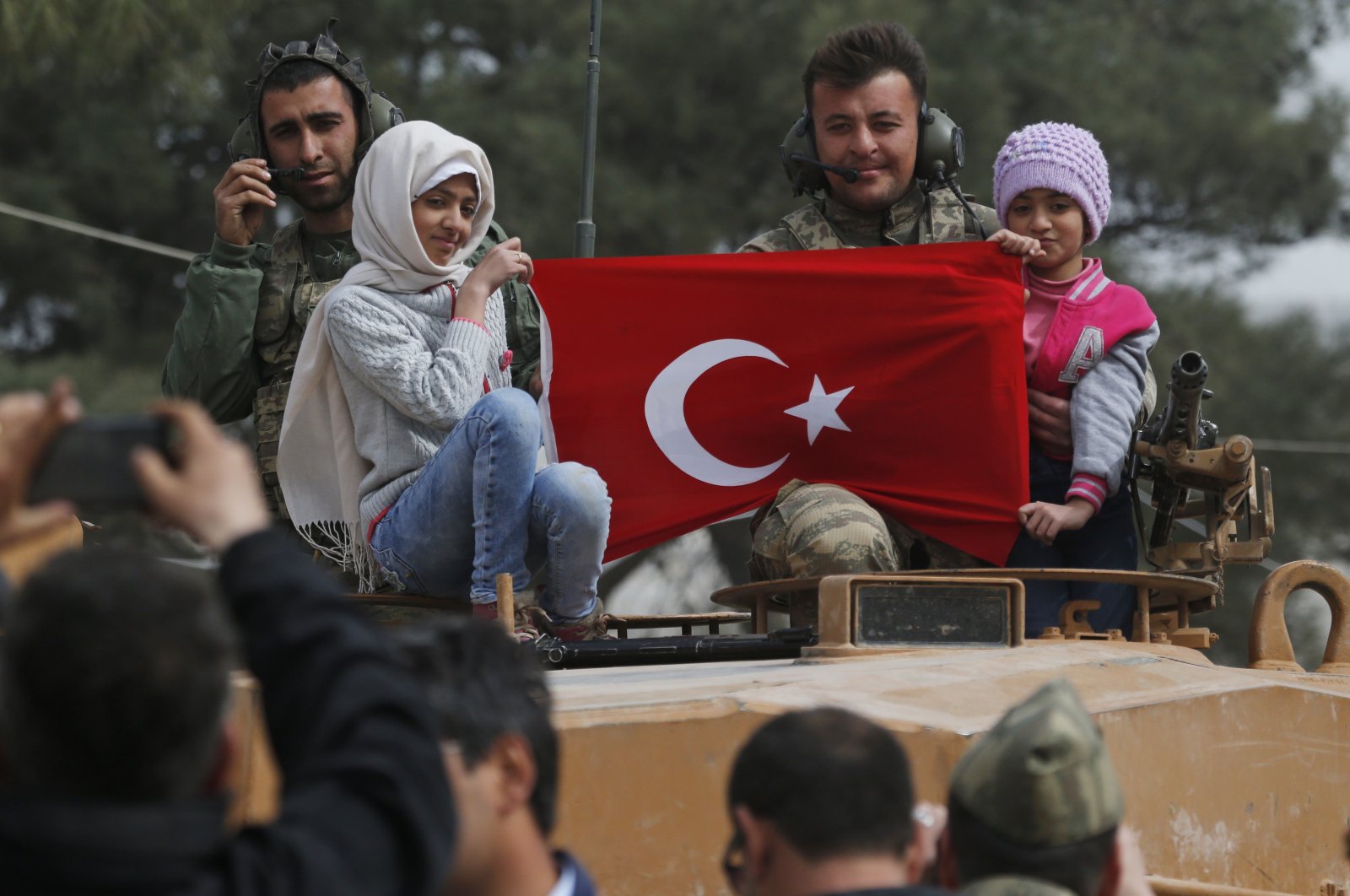 Turkish soldiers atop a tank pose for photos with Syrian children holding a Turkish flag, in the northwestern city of Afrin, Syria, March 24, 2018. (AP Photo)
by DAILY SABAH WITH AA Feb 17, 2021 9:44 am
RECOMMENDED

Turkish troops are the only ones preventing the possible slaughter of millions of Syrian civilians at the hands of the Bashar Assad regime’s forces, The New York Times said Tuesday.

“As an end to the decade-long Syrian civil war still confounds the world, Turkey has become the only international force on the ground protecting some 5 million displaced and vulnerable civilians,” said an article titled “In Turkey’s Safe Zone in Syria, Security and Misery Go Hand in Hand.”

The article, written by Carlotta Gall, the Istanbul bureau chief for The New York Times who covers Turkey for the newspaper, said Ankara had received international criticism when it launched the cross-border operation, but Syrians are thankful for the presence of Turkish troops in their country.

She noted that Turkish troops stand between the Syrians and potential carnage at the hands of regime forces and Assad’s Russian allies.

The report cited a once-wealthy landowner from Damascus as saying that he wanted to stay in Turkey as long as Assad rules the war-torn country.

“We won’t go back to our villages until Turkey gives us protection. Without the Turks, we cannot survive,” he said.

Hundreds of thousands of people have been killed and more than 10 million displaced, according to United Nations estimates.

Since 2016, Turkey has launched four successful operations across its border in northern Syria to prevent the formation of a terrorist corridor and enable peaceful settlement by locals: Euphrates Shield in 2016, Olive Branch in 2018, Peace Spring in 2019 and Spring Shield in 2020.

While Turkey still hosts more Syrian refugees than any other country, according to figures, the counterterrorism operations have allowed hundreds of thousands of Syrians in Turkey to resettle in their homeland.

Turkey has often voiced that in order to establish long-lasting stability and normalization in Syria, the return of displaced Syrians to their hometowns is just as important as the fight against terrorism.