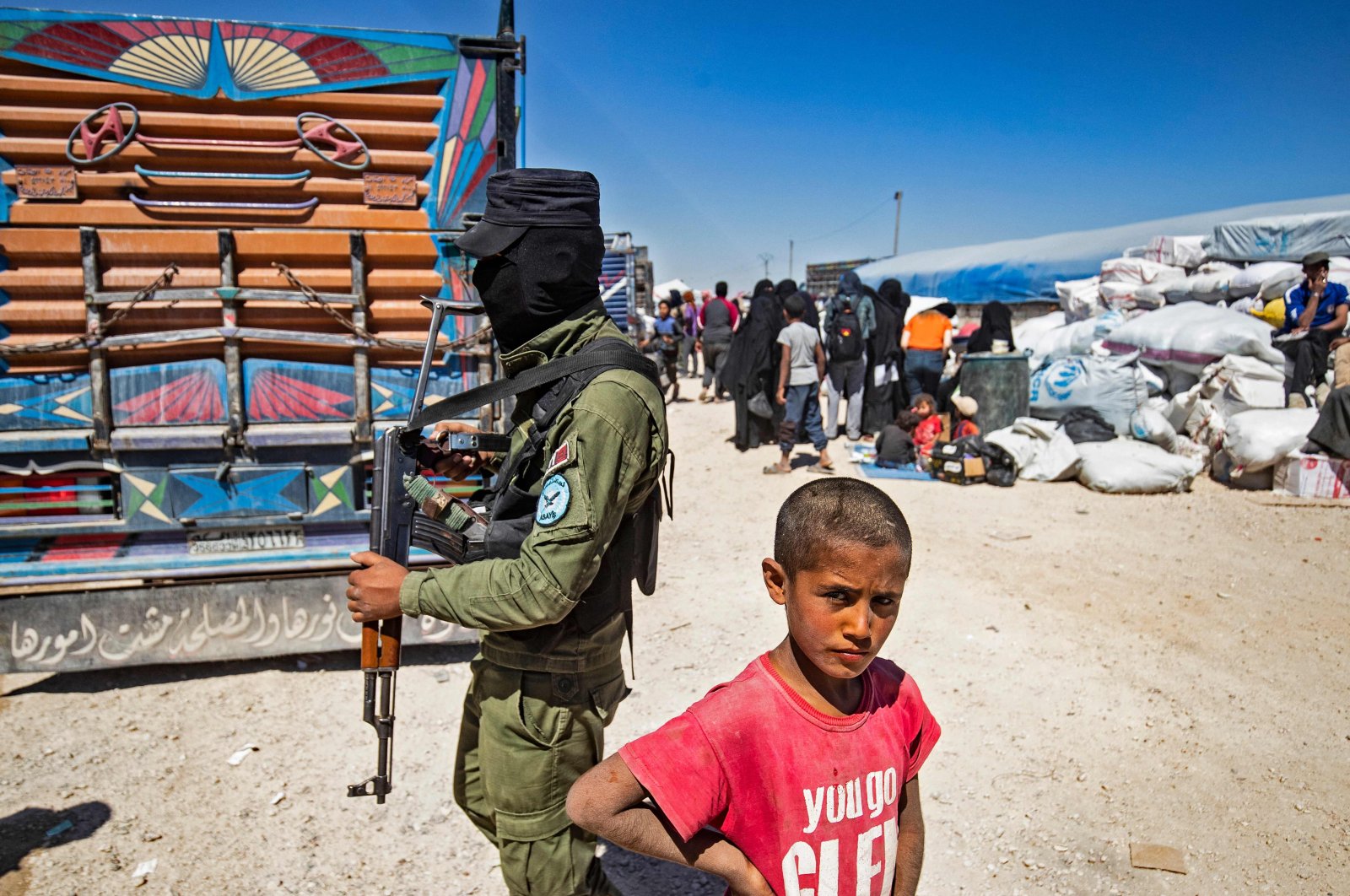 A boy stands next to a YPG terrorist amid preparations for departure as another group of Syrian families is released from the al-Hol camp in the northeastern Hassakeh governorate, Syria, on May 11, 2021. (AFP Photo)
by Daily Sabah with AFP May 19, 2021 12:35 pm
RECOMMENDED

Denmark is preparing to repatriate 19 Danish children who belong to families with ties to Daesh due to the poor conditions in the camp they are being held in run by YPG, the Syrian branch of the PKK terrorist organization.

The decision was made after a report by a commission studying the conditions for repatriation.

"The situation as regards humanitarian security in the camps has deteriorated. Particularly in the al-Hol camp, where there is a shortage of food and medical care," Danish Foreign Minister Jeppe Kofod told a press conference.

The humanitarian situation and the radicalization of children in the camps recently prompted the Danish government, which has previously opposed any intervention, to change its approach.

Prime Minister Mette Frederiksen reaffirmed in March that parents of Danish nationals in the camp would not be candidates for repatriation, so the move announced Tuesday to repatriate three mothers marks a policy change.

These women "should be punished as severely as possible upon their return to Denmark," said Justice Minister Nick Haekkerup.

According to Danish intelligence services, the mothers would face prosecution for "terrorism" upon their return to the Scandinavian kingdom.

According to the Danish police intelligence service, PET, at least 160 people from Denmark have gone to fight in Syria or Iraq.

Around a third of them have been killed in battle, 32 are still there and around a half have returned to Denmark or have gone to live elsewhere.

The extremist network is considered by PET to be the greatest threat to Denmark's security.

Elsewhere in Europe, Belgium announced in March its intention to "do everything possible" to repatriate 30 Belgian children from Syria.

In December, Germany and Finland announced that they had repatriated 18 children and five women from northern Syria, some of whom face trials for belonging to the Daesh terror group.

Turkey has criticized Western countries for refusing to repatriate their citizens who left to join Daesh in Syria and Iraq, and stripping some of them of their citizenship. Although the 1961 New York Convention made it illegal to leave people stateless, several countries, including Britain and France, have not ratified it, and recent cases have triggered prolonged legal battles. The U.K. alone has stripped more than 100 people of their citizenship for allegedly joining terrorist groups abroad.

The U.N. children's agency called earlier this year for all minors held in displacement camps or jails in northeast Syria to be allowed home. UNICEF made its plea a day after three children died in a fire at the overcrowded, YPG-held al-Hol camp, for people displaced in the fight against the Daesh terrorist group.

The U.N. counterterrorism chief has also called on countries to repatriate the 27,000 children stranded in the massive camp in northeastern Syria.

Al-Hol, the largest camp for refugees and displaced Syrians in the country, is currently home to almost 62,000 residents, according to U.N. humanitarian officials. More than 80% are women and children, many of who fled there after Daesh militants lost their last Syrian stronghold in 2019. There are a number of other camps in the northeast as well.

The YPG seized much of northern and eastern Syria from the Daesh terrorist group with U.S. backing. They have since held thousands of Daesh terrorists in prisons, while their wives and children – numbering tens of thousands, many of them foreigners – are living in camps.