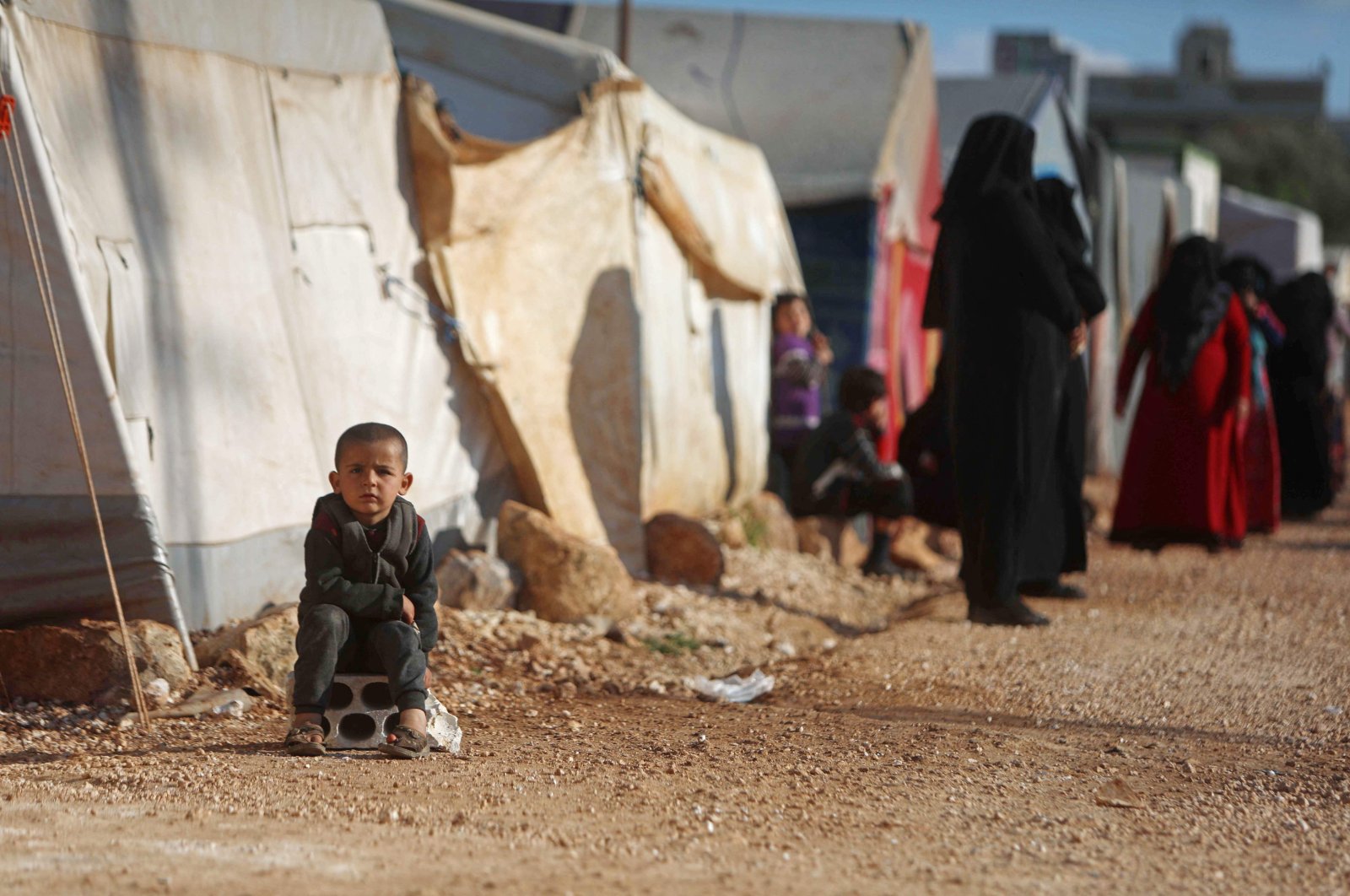 A child sits near displaced Syrians lining up to collect plates of food prepared by a local charity for the Ramadan fast-breaking meal at a camp for people displaced by conflict in the town of Sarmada in Syria's northwestern Idlib province, April 13, 2021. (AFP Photo)
by Anadolu Agency Apr 16, 2021 2:24 pm
RECOMMENDED

Hundreds of thousands of displaced Syrians living in the northwestern Idlib province began the Islamic holy month of Ramadan in dire humanitarian conditions as the decadelong civil war has left many of them without a home and a proper job.

Despite a cease-fire in Idlib announced in March last year by Turkey and Russia that introduced security for Syrians living there, they are still experiencing conditions of poverty and misery amid widespread unemployment caused by many years of fighting.

The situation has aggravated conditions for Syrian families in general during the month of Ramadan, especially displaced families living in Idlib, who lack sources of income to prepare for the fasting month.

Um Khader and her family fled from the rural Hama area three years ago due to continued attacks by forces of the Bashar Assad regime and now resides in the Atimah camp in Idlib.

She says her husband is unable to work after being hit in his spine.

"My children haven't eaten meat for three years. I am speechless. We didn't make any preparations for Ramadan except our prayers," she said.

Another Syrian refugee, Khalid Sheiban, told Anadolu Agency (AA) that the prices of all goods have surged, leaving most of the refugees unable to afford basic commodities.

Sheiban said the previous Ramadan was worse, and they are still facing the same conditions.

"Living conditions here are not good. The children are experiencing humiliation. We can't afford to provide them with the minimum requirements. Our financial situation is bad," he added.

Emad Khalid, a vegetable vendor from the town of Saraqib in eastern Idlib who sells vegetables in the Atimah camp, says that most of the camp's residents do not have purchasing power as they are mostly unemployed and lack financial resources.

"May Allah help the camp's residents. I hope they can return to their places soon. All of them are waiting for such a moment to return to their homes and villages," Khalid said.

He added that most of the camp's residents are breaking their fast during Ramadan with little food and they cannot afford to buy meat.

In May 2017, Turkey, Russia and Iran announced a "de-escalation zone" agreement as part of talks in Astana, Kazakhstan. The de-escalation zones included Idlib province, areas of Latakia, Hama and Aleppo, northern rural areas of Homs province, eastern Ghouta and Al-Qunaitra and Daraa in southern Syria.

Regime forces and pro-Iranian groups, however, launched attacks in these areas and took control of many areas under aerial protection from Russia.

Following these developments and ceasing control of areas in Idlib in May 2019, Turkey and Russia signed an agreement in Moscow for a new cease-fire in March 2020.