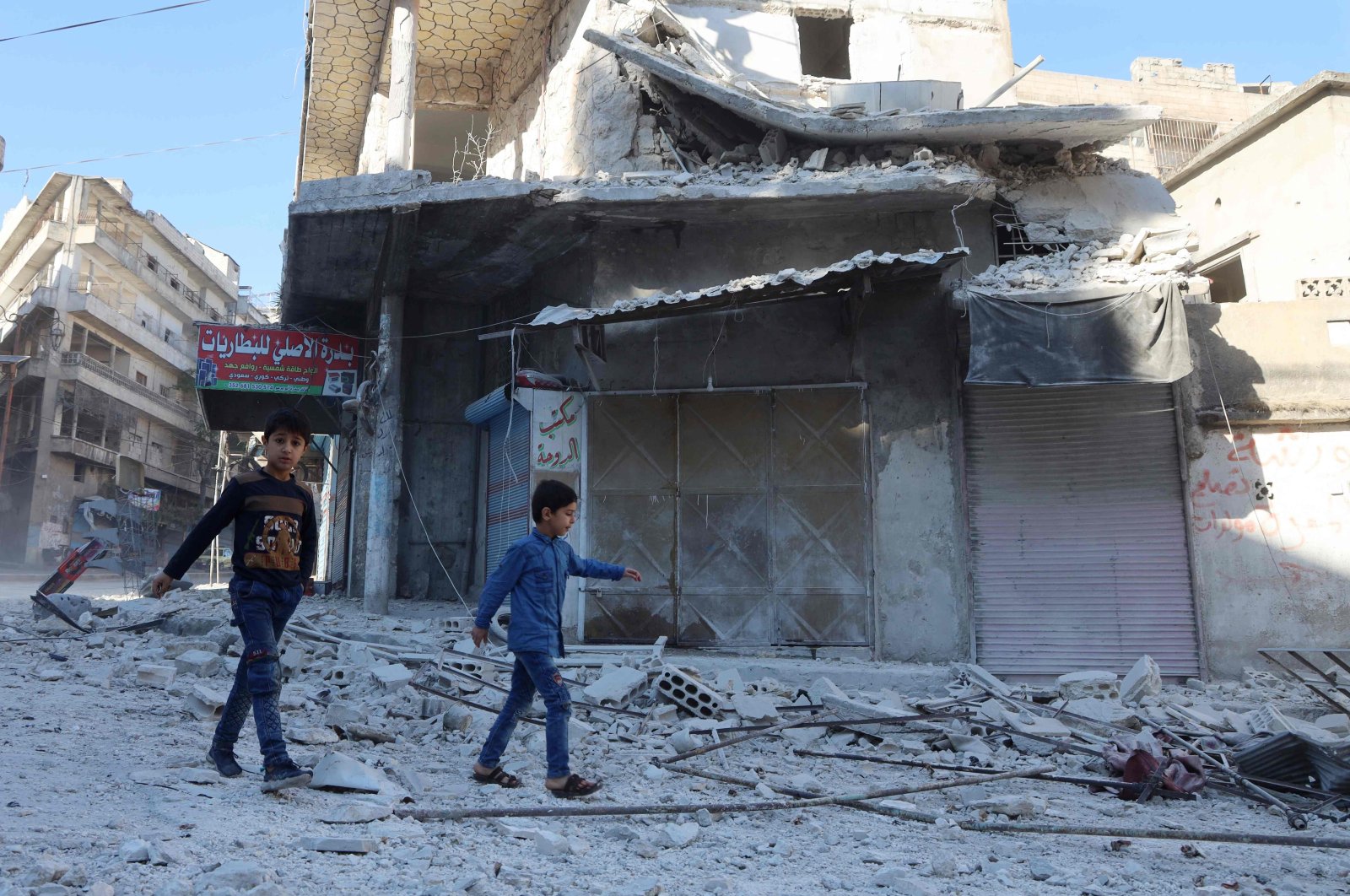 People walk past debris at the site of shelling in the Syrian town of Ariha in the opposition-held northwestern province of Idlib, Syria, Oct. 20, 2021. (AFP Photo)
by DAILY SABAH WITH AGENCIES Oct 24, 2021 12:46 pm

The latest round of Syrian constitutional talks, described by the U.N. as a 'big disappointment,' have failed to make any headway as violence increases in the already frequently targeted northern parts of the country

The Bashar Assad regime and its backer Russia continued their attacks on civilians in northern Syria on Saturday as talks on a new constitution for the war-torn country this week ended in disappointment.

A woman and her two children were injured on Saturday by regime forces and Russian artillery shelling on residential neighborhoods in Darat Izza, west of Aleppo, the White Helmets Syrian civil defense group wrote on Twitter.

The attack comes as the sixth round of discussions between 15 representatives each from Assad's regime, the opposition and from civil society, were held this week at the United Nations in Geneva.

The regime and the opposition traded barbs afterwards, pointing the finger at each other for the lack of progress.

"We had three days that went rather well and one day that was more difficult."

This week, each delegation brought forward draft texts on different areas of the constitution: on Monday, the regime on sovereignty, independence and territorial integrity; on Tuesday, the opposition on the armed forces and security; then civil society on the rule of law; and on Friday, the regime on terrorism.

Pedersen wanted to wrap up Friday by striking a form of provisional agreement on the principles that had been discussed, either in part or in full – or if not, then agreeing on what the parties disagreed on.

"The discussion today was a big disappointment. We did not manage to achieve what we had hoped to achieve: that we would have a good discussion on how to reach forward for some kind of a consensus," the Norwegian diplomat said.

"We lacked a proper understanding on how to move that process forward."

Ahmad Kuzbari, the Syrian regime's representative, spoke briefly to the media after the meeting, blaming the opposition side for the talks not working, refusing to take questions.

"Our delegation reaffirms its will to carry on, to positively engage in the process of the Syrian constitutional committee," he said.

Hadi al-Bahra from the opposition said all sides agreed on the territorial integrity of Syria.

"The outcome means that all three parties have to have the necessary will to reach an agreement and to reach a political solution. Unfortunately, until now, this will is not present, at least from one party," he said, without naming the regime side.

"There were not even attempts to achieve a consensus," said al-Bahra.

"All those who were present in the meeting are against any foreign occupation of any kind," said the opposition chair.

He added: "There are agreements that have been signed by the regime that allow foreign forces to be present on the Syrian soil," in an apparent reference to Russia without naming it.

Negotiations have not been held since January, when the fifth round of talks hit a brick wall.

No date was agreed upon for the next round of discussions.

The SCC was created in September 2019 and first convened a month later.

The tentative negotiations are aimed at rewriting the war-torn country's constitution. It is hoped the talks can pave the way towards a broader political process.

It quickly spiraled into a complex conflict that pulled in numerous actors, including terrorist groups and foreign powers. The war has left around half a million people dead.

Throughout the civil war, the U.N. has been striving to nurture a political resolution.

The situation is especially worrying in northern provinces, including Idlib and Aleppo, which have seen an increase in attacks by both terrorist organizations and the regime.

The U.N. on Wednesday expressed deep concerns about what it said was increasing hostilities in northwestern Syria in recent months.

Most recently, an attack by the Bashar Assad regime on a marketplace in the Ariha district of Syria’s northwestern Idlib province killed at least 10 civilians and wounded another 35 last week.

Defense Minister Hulusi Akar also spoke on the issue this weekend in Brussels, saying that Turkey's presence in the Idlib region is "important.”

"Our presence there prevents massacres by the (Assad) regime," he said. "Preventing this also stops a wave of migration and radicalization."

The Idlib region is home to nearly 3 million people, two-thirds of them displaced from other parts of the country. Nearly 75% of the total population in the opposition-held Idlib region depends on humanitarian aid to meet their basic needs as 1.6 million people continue to live in camps or informal settlements, the U.N. Office for the Coordination of Humanitarian Affairs (OCHA) said.