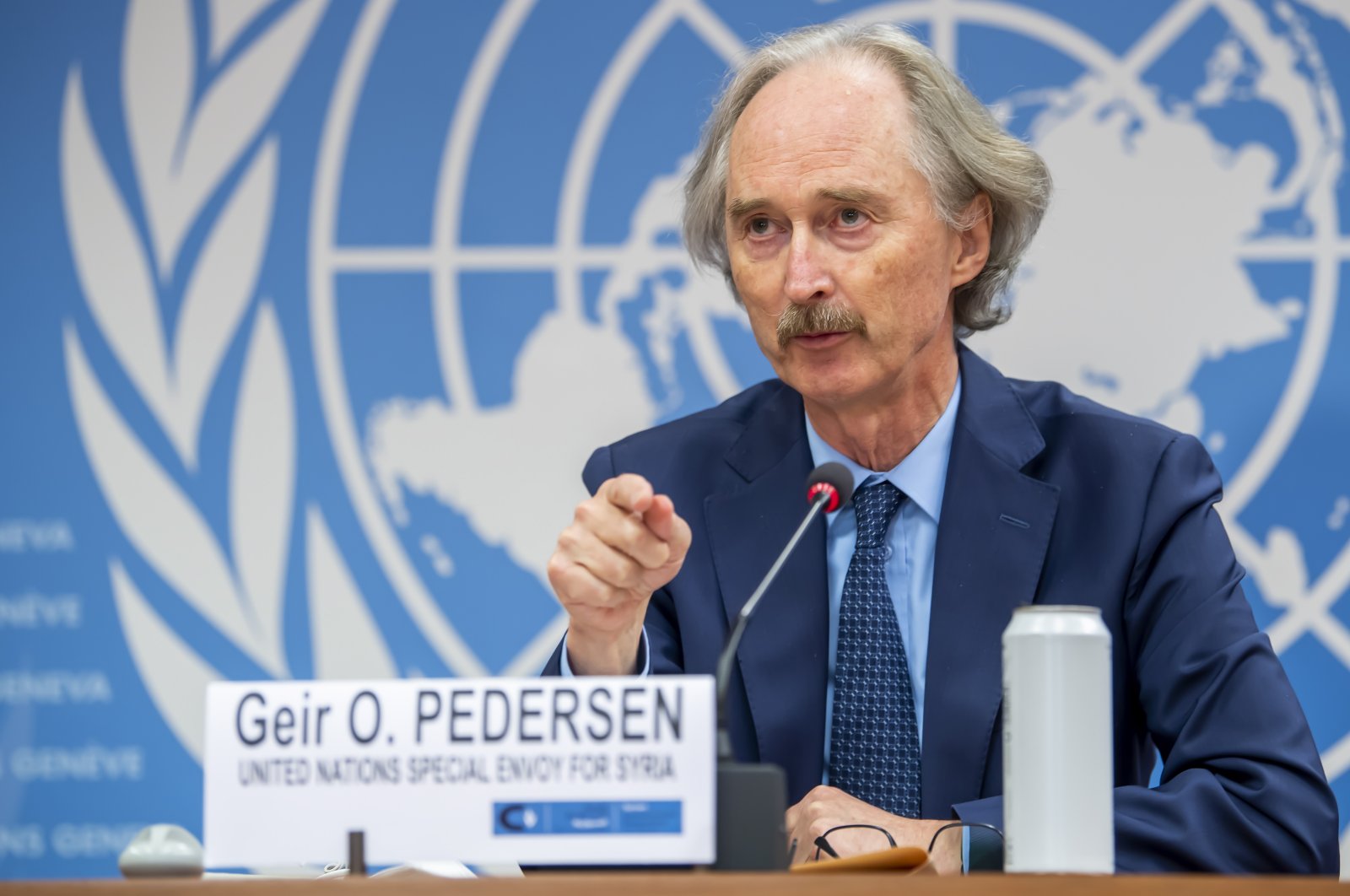 Geir Pedersen, U.N. Special Envoy for Syria, speaks to the media about the sixth session of the Constitutional Committee Small Body, during a press conference at the European headquarters of the United Nations in Geneva, Switzerland, 17 October 2021. EPA/MARTIAL TREZZINI
by DAILY SABAH WITH AA Oct 20, 2021 10:46 am
RECOMMENDED

As the sixth round of the Syrian Constitutional Committee meetings in Geneva continues into its third day on Wednesday, the office of the United Nations special envoy for Syria said Tuesday that the representatives have stated their commitment to presenting "constitutional texts" and would begin identifying provisional areas of agreement and disagreement.

Jenifer Fenton, the spokesperson for the U.N. Special Envoy for Syria, Geir Pedersen, said the current round of talks is scheduled to last until Friday.

Both sides filed in for the negotiations and then left after the day.

A new round of talks focusing on a new constitution for war-torn Syria began Monday in Geneva, with the opposition side noting they will continue but said the outcome is unclear at this stage.

"The constitutional committee has now begun a process of drafting," said Fenton at a U.N. briefing in Geneva.

"All delegations have stated their commitment to presenting draft constitutional texts and to begin to identify provisional areas of agreement and disagreement, including by proposing amendments and submitting revisions."

Fenton noted that for the special envoy, the constitutional process is "important."

Pedersen will "therefore also continue to work to facilitate a wider process to progress the implementation of Security Council resolution 2254," which outlines a process for an end to Syria's civil war.

The U.N. envoy began the day by meeting the two co-chairs of the constitutional committee – one from the opposition and one from the Syrian regime.

For the first time on Sunday, the two committee co-chairs – Ahmad Kuzbari, the Syrian regime's representative, and Hadi al-Bahra from the opposition side – sat down together with Pedersen "for a substantial and frank discussion on how we are to proceed with the constitutional reform."

On the first day of the talks, the regime delegation submitted a draft text including six articles on the basic principles of the constitution.

In the first article of the draft text, it says: "The Syrian Arab Republic is a fully independent, sovereign state that does not accept any outside interference in its internal affairs."

In the fifth article of the draft text, it says: "The Syrian Arab Republic is a part of the Arab world, proud of its Arab identity, and supports the mutual cooperation and solidarity of the Arabs in achieving the goal of unity of the Arab nations."

Syria has been embroiled in a vicious civil war since early 2011 when the Bashar Assad regime cracked down on pro-democracy protests with unexpected ferocity. More than 5 million civilians have since been displaced.