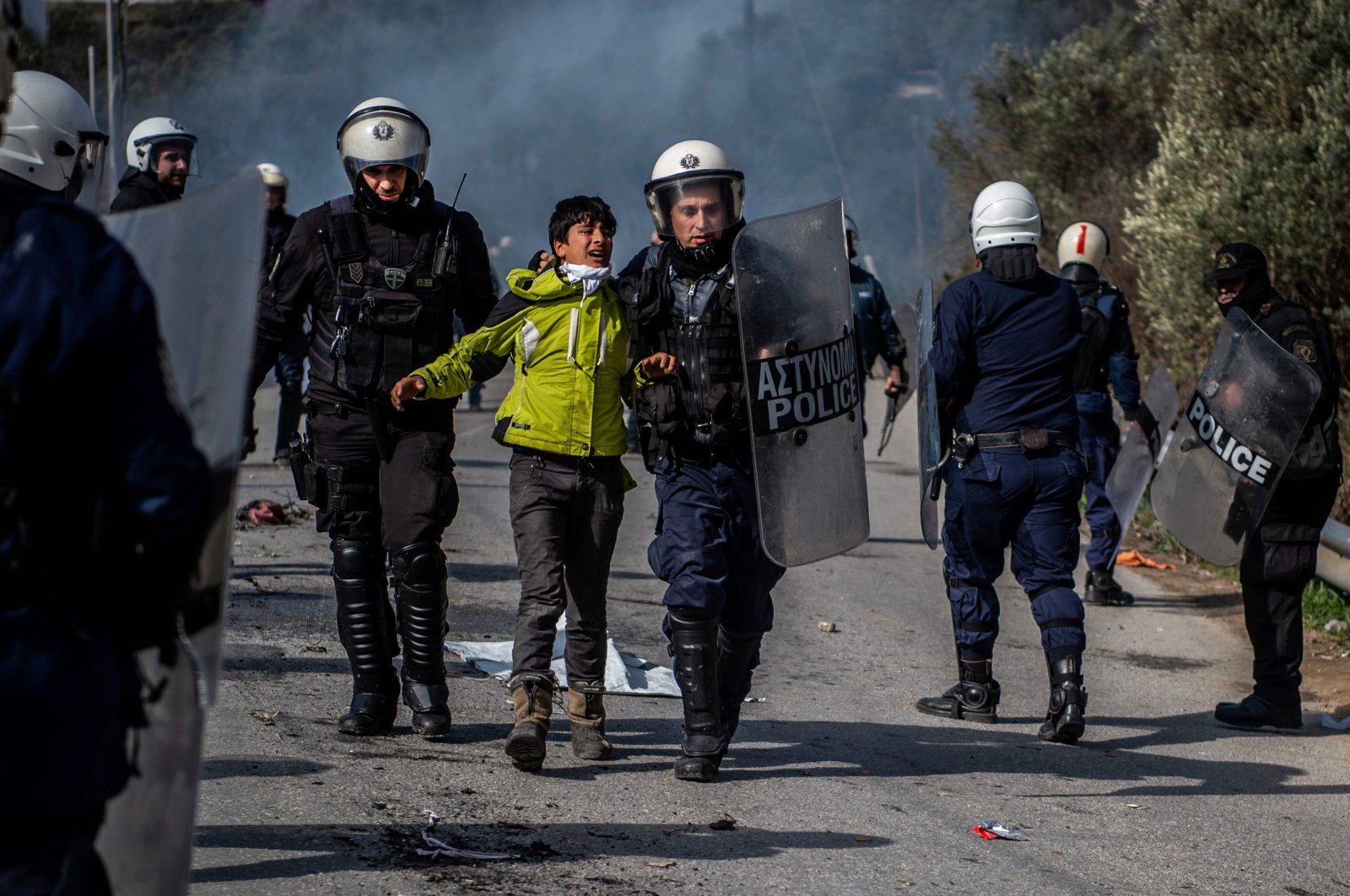 Riot police detain a migrant during clashes near the Moria camp for refugees and migrants, on the island of Lesbos, Greece, March 2, 2020. (AFP Photo)
by ASSOCIATED PRESS Jan 28, 2021 6:05 pm
RECOMMENDED

A Washington-based Syrian rights group filed a case with the International Criminal Court (ICC) on Thursday, calling for an investigation into alleged crimes against humanity by Greece for its mistreatment of refugees, including reported migrant pushbacks in the Aegean Sea.

The Syria Justice and Accountability Center said witness testimony and video evidence back its claims of mistreatment and abuse of refugees at Greece's borders and inside overcrowded camps. It cites instances of security guards using tear gas to disperse refugee protests, and shabby and unhealthy conditions at the sprawling camps.

Mohammad Al-Abdallah, the group's executive director, said this was the first legal challenge to the European Union over its treatment of refugees.

Throngs of migrants, mostly from war-torn Syria, have crammed into small dinghies on dangerous journeys over the Mediterranean Sea to escape fighting and persecution, overwhelming the European asylum system, starting in 2015. Over 1 million migrants have arrived, some of them Syrian refugees who entered the Greek islands via Turkey.

“If this case proceeds, it would send a clear message that yes, you have good policies in some countries, others (not) – but that you are actually governed by international law and by your refugee treaties, not by your individual member state's decision making,” said Al-Abdallah.

Prosecutors at the ICC will review the case before deciding whether to open a full-scale investigation, which would likely take months to complete. The court receives hundreds of submissions each year from groups and individuals urging it to look into alleged crimes, but has so far mostly taken on cases referred to it by the United Nations Security Council and member states.

In the past, the court based in The Hague has faced criticism for looking into cases mainly in African countries, though it is currently probing cases the world over.

The mistreatment documented since March 2016, the Syrian group argues, extends to Greece’s territorial waters where it has documented sabotaging of migrant boats, leaving them to drift back to the sea – even pushing them back into Turkish waters.

Such “pushback" incidents are considered contrary to international refugee protection agreements, which say people shouldn’t be expelled or returned to a country where their life and safety may be in danger.

The Syria Justice and Accountability Center said there is evidence that personnel from Frontex, the agency that monitors and polices migrant movements around Europe’s borders, participated in or were complicit in these abuses, which it says could amount to crimes against humanity.

Frontex is already under fire after an October investigation by media outlets said evidence in video and other public data suggests its members were “actively involved in one pushback incident at the Greek-Turkish maritime border in the Aegean Sea.”

Frontex maintains there is no evidence of its involvement in such actions, insisting that EU member countries have control over operations in their waters. But the allegations have been embarrassing for the European Commission, which in September unveiled new reforms to the EU’s asylum system.

Nesma Bashi, a legal fellow with the Syria Justice and Accountability Center who conducted research on the Greek Islands, urged the ICC to investigate the allegations on Greece, and the “international community to recognize and provide support to end the plight of refugees, including Syrians, who continue to suffer in Greece.”

The plight of the migrants and poor conditions in camps took a dramatic turn last September when a fire broke out on the island of Lesbos in what used to be the most overcrowded camp on the Greek islands, where over 12,000 people lived in a facility designed for nearly 3,000.

Al-Abdallah said that by resorting to international law, he hopes the case would influence the debate in individual EU member states.

“We are hoping this would also influence the policy and discourse on refugees within the EU, not only in Greece,” Al-Abdallah said. “No EU country wants an accusation of crimes against humanity."