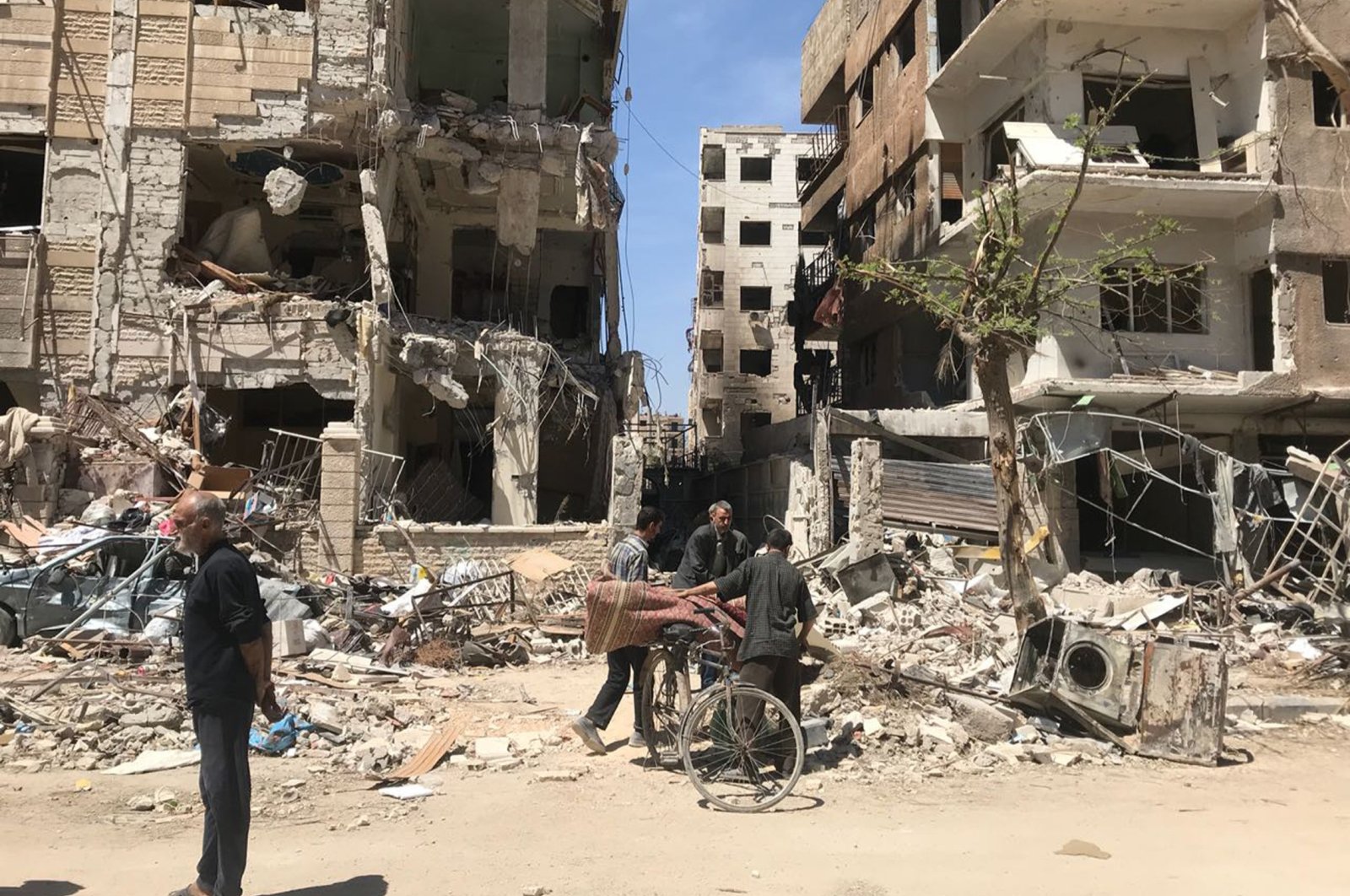 People stand in front of damaged buildings, in the town of Douma, the site of a chemical weapons attack, near Damascus, Syria, Monday, April 16, 2018. (AP Photo/Hassan Ammar)
by Anadolu Agency Apr 06, 2021 1:20 pm
RECOMMENDED

With the third anniversary of a deadly chemical attack in Douma, Syria, being observed Wednesday, a survivor recalls the day when the Bashar Assad regime perpetrated a war crime on helpless civilians.

"I remember witnessing children without limbs, without heads. When I remember these scenes, I suffer from psychological conditions," he added.

Recalling a massacre that took place at the popular marketplace in Douma city, he said, "On that night, I couldn't sleep and I was disorientated for the next two weeks."

At least 70 people were killed when the Assad regime carried out a chemical attack on the Douma district of Eastern Ghouta near Damascus on April 7, 2018. Hundreds more were injured. Syrian regime forces carried out two airborne chemical attacks within three hours.

The first attack came at 4 p.m. local time near the Saada Bakery on Omar bin al-Khattab Street. The second attack took place at approximately 7:30 p.m. near Al-Shuhada Square in the Nauman area.

"We're talking about tens of tons of explosives striking homes where women and children were located, so imagine what conditions those families were in after the massacre," he said.

The Assad regime's use of chemical weapons was confirmed by United Nations investigators as well as the Organization for the Prohibition of Chemical Weapons (OPCW), an intergovernmental organization based in The Hague, the Netherlands.

The OPCW confirmed the regime's use of chemical weapons on March 1, 2019. The organization determined after a nearly yearlong probe that there are "reasonable grounds" that chlorine was used as a weapon in the Douma district of Eastern Ghouta in 2018.

The OPCW, the implementing body for the Chemical Weapons Convention (CWC), with its 193-member states, oversees the global endeavor to permanently eliminate chemical weapons.

The Assad regime's use of chlorine as a chemical weapon is a violation of its obligations under the CWC, to which it is a party, as well as U.N. Security Council Resolution 2118.

All of the U.N. bodies – as well as other international organizations such as Human Rights Watch (HRW), Amnesty International and the Syrian Network for Human Rights (SNHR) – accused the Assad regime very clearly of launching the chemical attack in Douma, said Fadel Abdul Ghany, the founder and head of the SNHR, while speaking to AA.

"We've acquired several photos and videos that show tens of piled-up dead bodies of women and children. A blueness had struck their faces, their mouths were covered in foam and their eyes were startled," SNHR said in a report on April 8, 2018.

These pictures bear a large similarity to the victims' pictures from the two Ghouta attacks in August 2013 and Khan Sheikhoun's attack in April 2017, the report said.

Despite dozens of reports condemning the Assad regime from the U.N. and the OPCW, no judicial process has been started against Assad.

While the regime was held accountable by international organizations, justice has yet to be served.

Ghany accused the U.N. Security Council, which is responsible for maintaining peace in Syria, and other international bodies of "total failure" in bringing the perpetrators to justice.

The Security Council issued three resolutions on the issue, but none of them are being implemented against the Assad regime, he noted.

"Despite all these resolutions, Assad used chemical weapons again without any jurisdiction or accountability," he said.

"Here we are confronted with the concrete, repeated and confirmed use of weapons of mass destruction without any real reaction," Ghany stressed.

Crimes committed by the Assad regime require more than mere condemnation and minor attacks against regime targets, which achieve nothing, he added.

The U.S., U.K., and France warned the Syrian regime in April 2019 against further use of chemical weapons, a year after the deadly chemical attack on Douma killed dozens of people.

The three countries conducted a series of missile strikes in retaliation for the attack, striking Syrian regime targets including a research center in Damascus and what they said was a chemical weapons storage facility near Homs.

With the Security Council unable to do anything, the responsibility has moved to the U.N. General Assembly and the international community, according to Ghany.

"So, we cannot just blame Russia's veto and the failure of the U.N. system for Assad's violations. There is a responsibility on all the states who endorsed and passed the CWC," he said.

"It is the responsibility of the U.K., Germany, France and all civilized democratic countries to punish and impose more sanctions on Assad and his allies," he noted.

Ghany also warned that if they impose sanctions only against Assad without his allies that would not make any sense as Iran and Russia will provide Assad with aid, funds and support.

"Economic sanctions will not be sufficient at all. They must impose military sanctions. They must even interfere to prevent the crimes against humanity and war crimes committed by the Assad regime through using chemical weapons," he added.

On the third anniversary of the deadly chemical attacks, the victims still suffer and Assad is denying any use of chemical weapons, Ghany said.

"A total failure of justice and accountability and effects of these attacks not only reflected on the direct victims themselves but it's also affecting the entire Syrian community, especially those opposing Assad as they felt that he can do anything with total impunity, even after using weapons of mass destruction," he said.

Ghany noted that the failure also affects the region's population as it encourages other dictators similar to Assad to use weapons of mass destruction and to build relations with Russia or China so they can survive.

"Fighting Assad's crimes against humanity is not just the Syrians' responsibility and since it's out of our capacity we need all the support from around the globe," he said.

"Using chemical weapons not only directly affects the victims and more than 10 million displaced Syrians, but also all the entire humanity," he added.

Ghany called on the international community to show sympathy and provide support for the victims and their survival.

"We have to keep requesting accountability and justice for the crimes committed by the regime," he said.

The Syrian file is packed with violations – intentionally and directly – carried out by the Assad regime, Russia and Iran, said Raed Al Saleh, director of the Syrian civil defense group the White Helmets.

"We are talking about more than 350 chemical attacks in Syria. There are tens and sometimes hundreds of victims including women and children who suffocated to death in various types of chemical attacks," Saleh said.

Saleh has been working on documenting events, massacres and what has happened in general in Syria since 2012.

He worked on an investigative film in which he documented the chlorine attack on April 7, 2018, which led to the evacuation of Douma residents.

"The crimes and massacres that took place in Syria, including chemical attacks and others, did not get their share of international coverage at all by the international press or even human rights platforms and international foundations," he said.

Saleh said the international community, U.N., Arab League and all international legal and human rights organizations are seen by the Syrian people as a direct partner in killing and besieging them.

"There is a state of extreme anger among the Syrian people against the international community, organizations and press, which they considered partners, accomplices, or neutrals while they had to back the victims," Saleh noted.

He said Russia, a permanent member of the U.N. Security Council, protects a "criminal" who committed massacres.

"We are facing a catastrophe as the Security Council has itself become a problem," said Saleh.