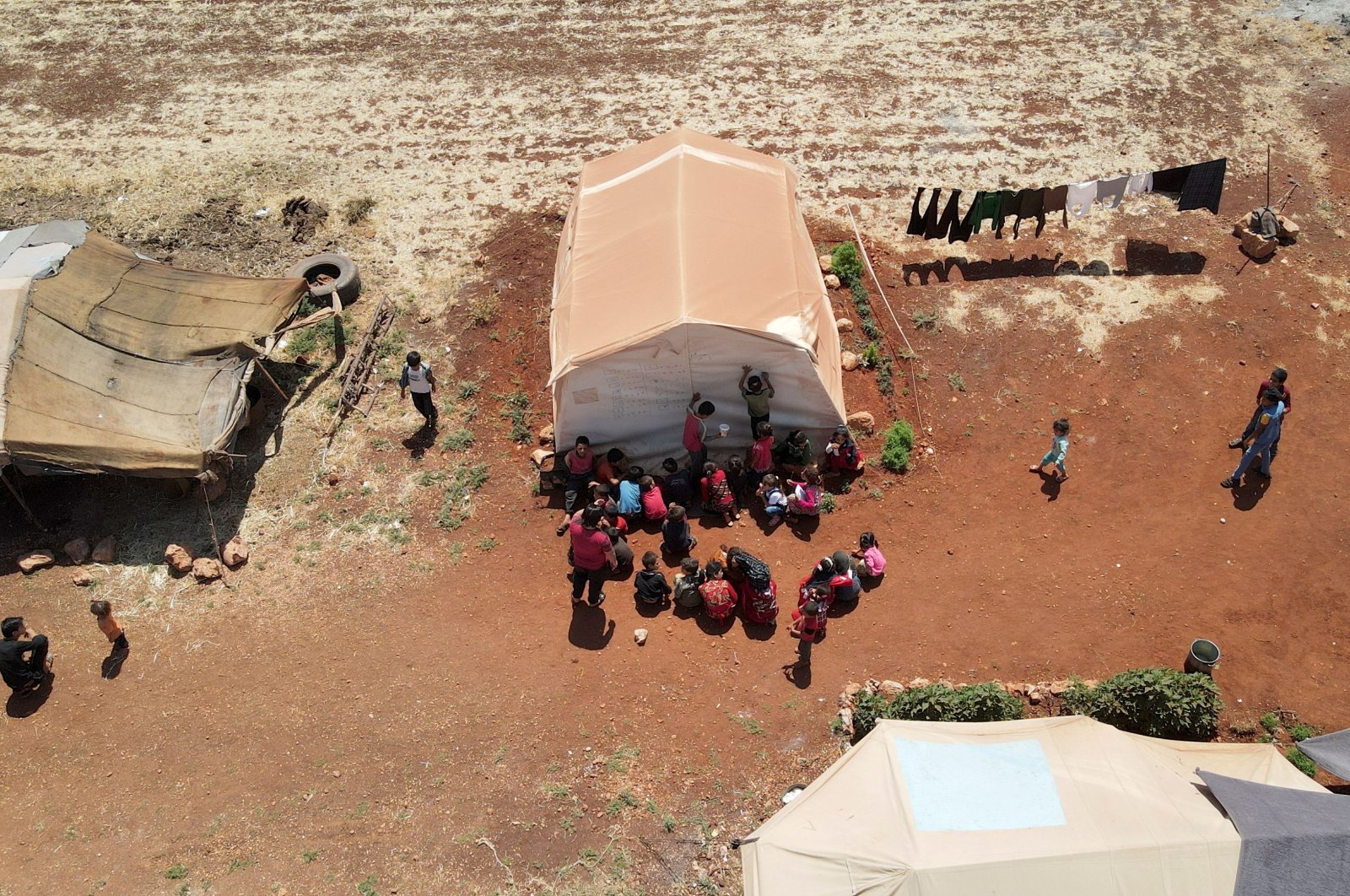 Failure to extend the use of the last border crossing for humanitarian aid into Syria would result in a humanitarian tragedy, as the already vulnerable population in the war-torn country could be deprived of essential food and medical supplies

A draft U.N. Security Council resolution circulated by Norway and Ireland envisages authorizing the delivery of vital humanitarian aid to war-torn Syria across the borders of Turkey and Iraq. However, Syria’s close ally Russia holds the key to its adoption, as the current resolution will expire in early July.

Russia has come under intense pressure from the U.N., U.S. and others who warn of dire humanitarian consequences for over a million Syrians if all border crossings are closed. Russia says aid should be delivered across conflict lines within Syria to reinforce the Bashar Assad regime’s sovereignty over the entire country.

The Security Council approved four border crossings when deliveries began in 2014, three years after the start of the Syrian conflict. But in January 2020, Russia used its veto threat in the council to limit aid deliveries to two border crossings, and in July 2020, its veto threat cut another. So today, aid can only be delivered through the Bab al-Hawa crossing from Turkey to Syria’s opposition-held northwest, and its mandate ends on July 10.

The draft resolution circulated by Norway and Ireland and obtained by The Associated Press (AP) would keep the Bab al-Hawa crossing and restore aid deliveries through the Al-Yaroubiya crossing point from Iraq in the northeast that was closed in January 2020. It would also end the six-month mandate Russia insisted on and restore a one-year mandate.

Turkey, on the other hand, urged last week to keep Cilvegözü Gate (Bab al-Hawa) – the only border crossing used for aid deliveries – open for another 12 months, as Russia said it intends to close it.

Security Council experts are expected to discuss the proposed resolution early next week.

The one-page draft resolution states that “the devastating humanitarian situation in Syria continues to constitute a threat to peace and security in the region.”

U.S. Ambassador to the U.N. Linda Thomas-Greenfield, who recently visited the Bab al-Hawa crossing, expressed disappointment that the resolution “falls short” of the three crossings the United States is seeking to restore. She said a second crossing from Turkey to the northwest at Bab al-Salam that was closed in July 2020 should also be restored.

Since then, she said, not a single cross-line convoy has reached the northwestern province of Idlib in the opposition-held region. Noting that since Al-Yaroubiya was closed, “needs have risen 38% in northeast Syria.”

“Millions of Syrians are struggling, and without urgent action, millions more will be cut off from food, clean water, medicine and COVID-19 vaccines,” Thomas-Greenfield said. “The situation is devastating and will only get worse if we don’t act.”

David Miliband, president and CEO of the International Rescue Committee, welcomed efforts to continue aid to the northwest and restore deliveries to the northeast but also expressed concern that the resolution didn’t also seek to restore deliveries through Bab al-Salam. He called the crossing from Turkey “a direct gateway” to northern Aleppo, which is home to 800,000 displaced people.

“Violence and insecurity have previously forced Bab al-Hawa ... to close, jeopardizing the timely delivery of aid to millions of Syrians,” he said, calling on the Security Council to “maximize the number of crossing points, and access to aid, as a matter of urgency.”

Lavrov accused Western donors, who are the largest providers of humanitarian aid to Syria, of “blackmailing” by threatening to cut humanitarian financing for Syria if the mandate for Bab al-Hawa is not extended.

“We consider it is important to resist such approaches,” he said in a recent statement conveyed to U.N. Secretary-General Antonio Guterres and obtained Tuesday by AP.

Russia’s U.N. Ambassador Vassily Nebenzia insisted on Wednesday that aid can and should be delivered across conflict lines in Syria and accused the U.N. and the West of doing nothing to promote such deliveries during the past year.

Opponents say the Assad regime has not hesitated to use civilian starvation and siege as a weapon in the war, and fear a destabilizing surge of refugees into neighboring Turkey if the crossing shuts down.

Unless Western nations “both in words and deeds prove their commitment to this goal,” he warned that there is no point in speaking about renewing the mandate for the one remaining border crossing from Turkey to northwest Idlib at Bab al-Hawa.

“We still have some time before the 'D-Day.' Hopefully it will not be wasted,” Nebenzia said.

Civilians who took shelter in camps on the Turkish border with Idlib face the risk of starvation.

The Idlib de-escalation zone was forged under an agreement between Turkey and Russia. The area has been the subject of multiple cease-fire agreements, which have been frequently violated by the Assad regime and its allies. Most recently, a fragile truce was brokered between Moscow and Ankara in March 2020 in response to months of fighting by the Russia-backed regime. Almost a million people have fled the Bashar Assad regime’s offensive but the regime still frequently carries out attacks on civilians, hindering most from returning to their homes and forcing them to stay in makeshift camps.

Ali Shami, who took shelter in the Atmeh Refugee Camp near the Turkish border in Idlib four years ago due to the forced evacuations in the eastern Ghouta region of the capital, Damascus, told Anadolu Agency (AA) that Russia now wants to kill the civilian population by starving them after the attacks.

Stressing that Russia wants to close the border crossing from which humanitarian aid, albeit a little, comes, Shami said: "If the Bab al-Hawa Border Crossing, which is a breather for the people in the region as the Bashar Assad regime does not exist, is closed, millions of civilians will face starvation."

Stating that the U.N. should treat civilians and the oppressed fairly, Shami said, "Russia wants to starve the Muslim community."

Ahmet Abu Ratib, who was forcibly displaced from eastern Ghouta after six years of the regime's blockade and took shelter at the same camp, said the last humanitarian aid door through which civilians could breathe should not be closed.

Highlighting that civilians living in tents received food and medicine aid from Bab al-Hawa Border Crossing, Abu Ratib said, "civilians were sentenced to live in tents. Who wants to live on the top of the mountain in dust, soil, among snakes and scorpions?"

Emphasizing that they are struggling to survive in difficult living conditions in tents, Abu Ratib said, "Russia wants to starve our children by closing the humanitarian aid gates, as if it wasn't enough to kill them with warplane attacks."

Khalid Abu Muhammed, who was forcibly displaced and settled in the camp said: "Russia left children orphaned by attacks. They forcibly displaced civilians from their homes. Now they covet a bite of bread that will come from the Baba al-Hawa Border Gate."

He called on the U.N. not to leave the civilians living in tents alone and not to close the last gateway for humanitarian aid.

Stating that Russia is using all its veto rights against the Syrian people, Abu Mohammed said, "Russia has devastated the people. It destroyed our homes. Our children have been orphaned. They want to close the door of humanitarian aid that comes to children with milk, food and medicine."

Noting that civilians living in tents have difficulty finding jobs, Abu Mohammed said, "the U.N. needs to take action to find a crumb of bread for the people struggling to survive."

"Overall, the levels of food insecurity in Syria are the worst since the start of the conflict," said World Food Programme Geneva spokesperson Tomson Phiri at a U.N. briefing on Friday.

Today, an estimated 12.4 million Syrians are food insecure, amounting to nearly 60% of the population who do not know what they will eat tomorrow, he said, adding that this is an increase of 4.5 million people in only one year.

Syria's war has devastated the country's economy since 2011, plunging around 90% of its people into poverty, according to the U.N.

‘Millions of lives at stake’

While concerns about the closure of the last border crossing into Syria remain, Doctors Without Borders (MSF) similarly called on the UNSC to renew the resolution in a recently published report.

“As one of the few remaining medical organizations in the area, MSF would face increased challenges in reaching the most vulnerable people in northwest Syria,” it stated.

MSF explained that most hospitals and health facilities would lack the necessary medical supplies to operate and patients’ lives would be put at risk. “Furthermore, the COVID-19 response and vaccination campaign in the area also risk being jeopardized by the closure of the last remaining border-crossing point, including the flow of Personal Protective Equipment (PPE), oxygen tanks, respirators, essential medications and COVID-19 vaccines.”

“After a decade of war, the renewal of the Security Council resolution is now more critical than ever,” Faisal Omar, head of the MSF Syria mission, was quoted as saying. “The lives of millions of people, the majority of whom are women and children, depend on it.”

“We will not be able to fill the void if U.N. agencies and other organizations sharply reduce their aid in northwest Syria,” Omar added.

Furthermore, MSF Field Coordinator for Syria Abdulrahman M. underlined that “if this lifeline is cut off, we would face many forms of death.”

“If the medical supply stops, we might lose our ability to treat patients, as our current stock can only last three months,” said Abdulrahman. “And if the supply of food and potable water stops, diseases and epidemics would affect the displaced and local people. Some people in this area have been displaced more than 14 times, and they are entirely reliant on humanitarian assistance.”