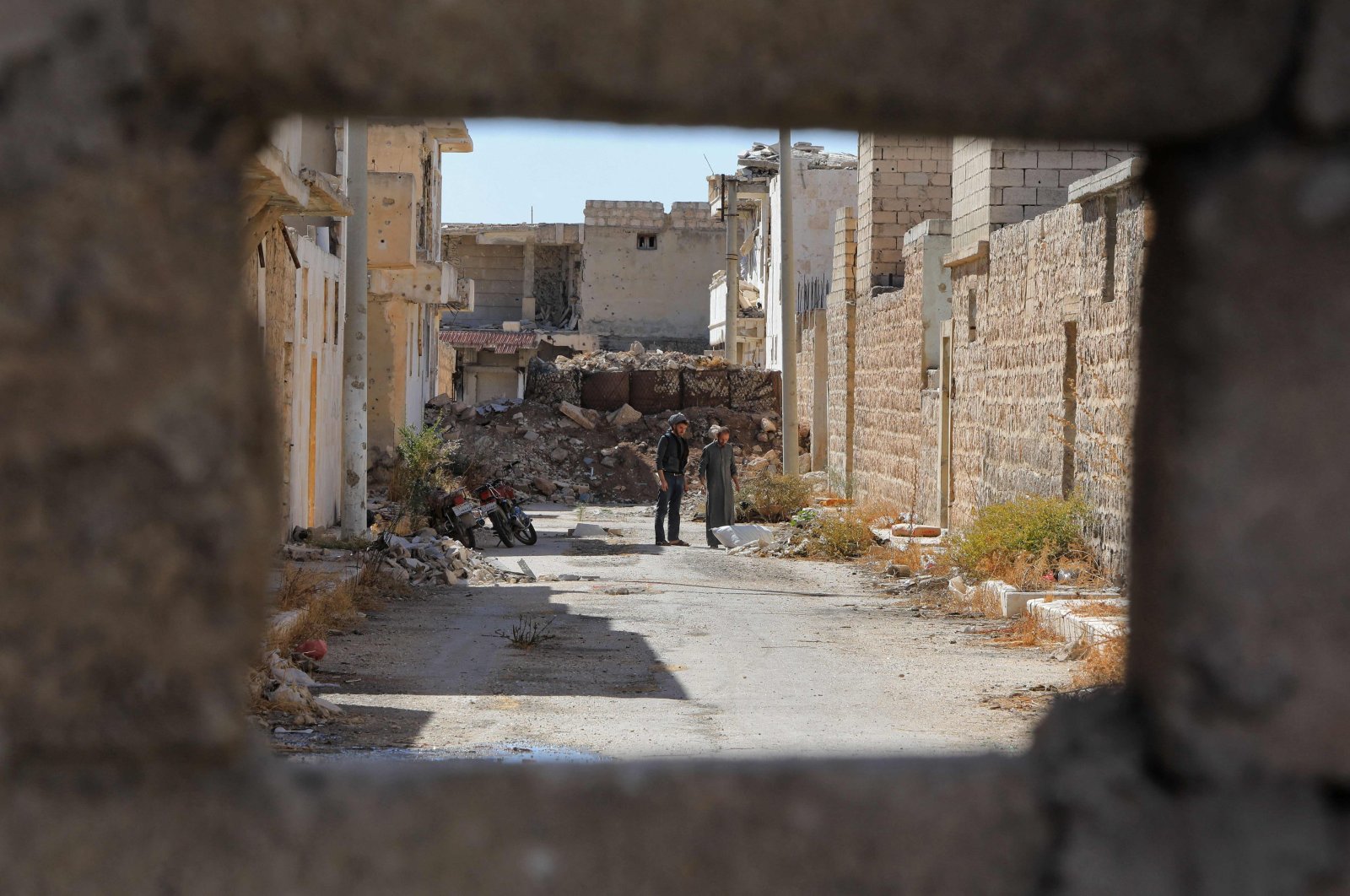 Syrian men are pictured through a hole at a border wall separating regime and opposition-held territory in the northern town of Tadif, located about 32 kilometers (20 miles) east of Aleppo city, on Oct. 7, 2021. (AFP Photo)
by DAILY SABAH WITH AGENCIES Oct 28, 2021 9:12 am
RECOMMENDED

The Bashar Assad regime’s refusal to negotiate on revisions to the country’s constitution is the key reason for the failure of talks last week, United Nations Special Envoy for Syria Geir Pedersen said Wednesday as violence continues to increase in the war-torn country.

Pedersen expressed his disappointment to the U.N. Security Council (UNSC), saying the parties also failed to agree to meet again before the end of the year. But he said he will continue to engage with all “to address the challenges that have arisen,” as they urgently need to produce results.

Pedersen said the regime delegation presented a proposed constitutional text on Syria’s sovereignty, independence and territorial integrity on Oct. 18, representatives of the exiled opposition presented a text on the armed forces, security and intelligence agencies on Oct. 19, while civil society groups submitted a section on the rule of law on Oct. 20. The regime submitted a second text on terrorism and extremism on Oct. 21, he said.

Pedersen said the regime and opposition co-chairs were unable to agree on how discussions should progress further at a plenary meeting Oct. 22, but they did agree that the parties, which include civil society representatives, could present further material.

“In that meeting, the delegation nominated by the government stated that it had no revisions to present of its draft constitutional texts and that it did not see any common ground,” the U.N. envoy said.

He said the opposition presented proposed amendments to all the proposals to try to build common ground, and some civil society representatives also presented revised versions.

The end result, Pedersen said, is that the 45-member drafting committee was “not able to move from submitting and discussing initial draft constitutional texts to developing a productive textual drafting process.”

Despite the failure, Pedersen said he remains convinced “that progress on the constitutional committee could, if done the right way, help to build some trust and confidence.”

“But let me stress that this requires real determination and the political will to try to build some common ground,” he said.

The talks last week followed a nine-month hiatus in the U.N.-led meetings of the Syrian constitutional committee.

Pedersen further said that he made contact with the representatives of the three Astana guarantor states – Iran, Russia and Turkey – on “the need to accelerate collective efforts on the crucial file of detainees, abductees and missing persons.”

At a Russia-hosted Syrian peace conference in January 2018, an agreement was reached to form a 150-member committee to draft a new constitution, with a smaller 45-member body to do the actual drafting including 15 members each from the regime, opposition and civil society. It took until September 2019 for the committee to be formed.

A 2012 U.N. road map to peace in Syria approved by representatives of the United Nations, Arab League, European Union, Turkey and all five permanent Security Council members calls for the drafting of a new constitution and ends with U.N.-supervised elections with all Syrians, including members of the diaspora, eligible to participate. A Security Council resolution adopted in December 2015 unanimously endorsed the road map.

The United States and several Western allies have accused Assad of deliberately stalling and delaying the drafting of a new constitution until after a presidential election in late May to avoid a U.N.-supervised vote, as called for by the Security Council. Assad was re-elected in what the regime called a landslide for a fourth seven-year term, but the West and the Syrian opposition slammed the elections as illegitimate.

Syria’s 10-year conflict has killed between 350,000 and 450,000 people and displaced half the country’s pre-war population of 23 million, including more than 5 million refugees mostly in neighboring countries. However, attacks on civilians are still continuing, especially in the northwestern regions of the country, while the northeast is controlled by terrorist groups.

The envoy called for international cooperation to “counter terrorist groups effectively and in a manner that strictly adheres to international humanitarian law.”

Pedersen said that while the talks were under way, violence continued, including terrorist attacks, airstrikes and heavy artillery shelling that caused casualties, including dozens of civilians. He said some incidents “also underlined the constant risks of regional escalation” and again called for a nationwide cease-fire.

Meanwhile, the attacks by the regime and Russia continue in the last major opposition bastion Idlib. A child was killed and four other children and a woman were injured by the regime forces and Russian bombings at a camp for internally displaced persons (IDP) for widows with Krasnopol shells near Termanin village north of Idlib, the White Helmets Syrian civil defense group reported late Wednesday.

“At least 55 children have been killed in the past four months by the Syrian and Russian governments, nearly a child every other day, and one million children in Idlib are terrified they might be next or they might lose their best friend at any moment,” the letter of the teachers said, adding that they were trained to evacuate the classroom when the bombs fall.

This week, 182 teachers in northwest Syria urged world leaders to take serious action to stop the brutal attacks that have killed a child almost every other day for over four months now, the Syria Campaign, a human rights organization, said.

“Whenever a warplane is nearby, we ask the children to remain calm and rush them to a shelter, usually a small room under the stairs, where we hide for hours until it’s safe to come out. Those are the hardest moments.”