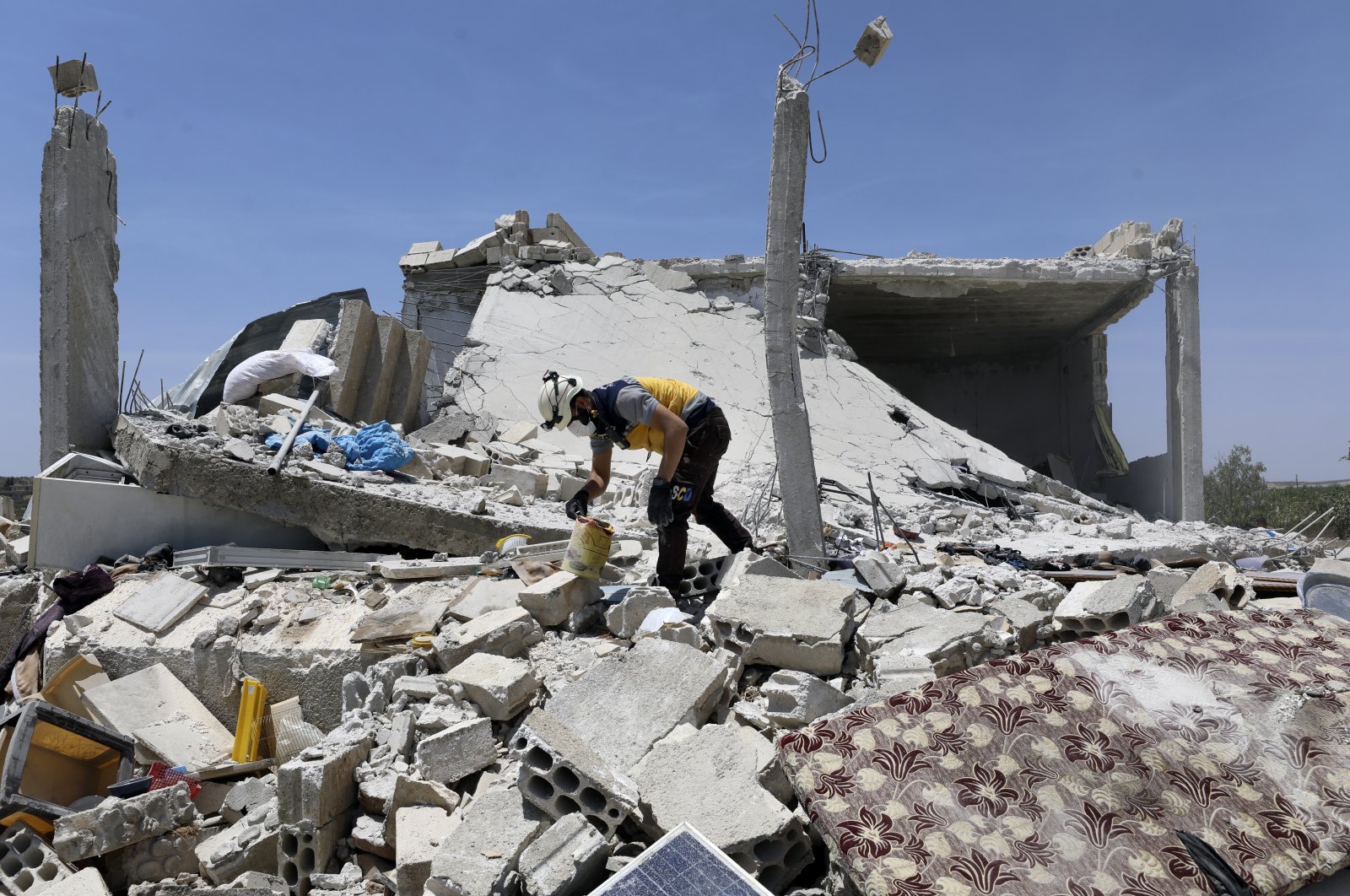 Already fearing the closure of the last remaining lifeline, the Bab al-Hawa border crossing used for humanitarian aid, Syrians in the northwest are victims of increasing attacks by the regime and its backers

Artillery fire from Bashar Assad regime-controlled territory and airstrikes Saturday on civilians have killed eight, six of whom were children, in renewed attacks that the United Nations called “the worst since the cease-fire brokered in March last year.”

“This is just tragic," said the regional director of U.N. children's agency UNICEF, Ted Chaiban. “An escalation of violence will only result in cutting short the lives of more children. We call for the protection of all children and strongly urge those fighting to refrain from further attacks."

The shelling in Ibleen, a village in southern Idlib province, hit the home of Subhi al-Assi, killing him, his wife and three of his children in their sleep, according to the rescue service known as the White Helmets and Idlib’s Health Directorate. Al-Assi was an administrator in a local health center.

“White Helmet Omar spends his days protecting Syrians but today he was helpless to save his 2 daughters Noor and Imam who were killed when the regime attacked their house in Idlib countryside,” the group tweeted Saturday.

The Britain-based Syrian Observatory for Human Rights also reported the shelling and casualties. The Observatory said the shelling was followed by airstrikes by suspected Russian warplanes that hit areas west of Idlib. The White Helmets said one of its centers was targeted and destroyed in the air raid, putting it out of service. Five volunteers were slightly wounded. A water station in the area was also hit and put out of service, the White Helmets said.

Almost a million people have fled the Assad regime’s offensive on the last opposition bastion since December 2019 with many seeking refuge in overcrowded tent camps near the Turkish border. Upon the Assad regime's attack, Turkey launched Operation Spring Shield. After, the surge of violence decreased following a Turkey-Russia brokered cease-fire in the region.

UNICEF said 512 children were verified killed in Syria last year. The majority of thoses deaths were in the northwest where there are 1.7 million vulnerable children, many of whom have fled violence several times.

“The only way out of the war in Syria is through diplomatic means. Violence and more attacks will push the country even further toward the brink and will riddle the way toward peace and a better future for millions of children in the country," Chaiban said.

The war in Syria has killed nearly 500,000 people since it started in 2011 with the brutal repression of peaceful demonstrations.

Mark Cutts, the U.N. deputy regional humanitarian coordinator for the Syria crisis, stated Sunday that he strongly condemned the attack in Idlib and wished condolences “to all who lost loved ones in these horrific attacks.”

A severe economic crisis has compounded the country's woes, with the majority of Syrians now living in poverty.

According to the World Food Programme, 60% of the population is now food insecure.

Residents of the northwest enclave are dependent on humanitarian aid brought in from across the border with Turkey.

However, the Cilvegözü (Bab al-Hawa) border crossing, currently the only authorized route for U.N.-coordinated humanitarian aid to reach millions of vulnerable civilians in northwest Syria, is at risk of being shut with a U.N. resolution expiring July 10.

Russia has advocated ending all cross-border aid to Syria, arguing it undermines Syria’s sovereignty despite several reports that the Assad regime hinders humanitarian aid to areas not under its control.

It says some 1,000 trucks have passed through the crossing every month over the past year,bringing in vital COVID-19 vaccines, hospital equipment and medicine for diabetes, tuberculosis and leishmaniasis.

The UNSC approved four border crossings when deliveries began in 2014, three years after the start of the Syrian conflict. But in January 2020, Russia used its veto threat in the council to limit aid deliveries to two border crossings, and in July 2020, its veto power cut another. So today, aid can only be delivered through the Bab al-Hawa crossing from Turkey to Syria’s opposition-held northwest.

Syrians who were displaced by attacks by the Bashar Assad regime and its supporters, and took shelter in refugee camps, consider the closure of the Bab al-Hawa border crossing an act of "mass murder."

Fear gripped millions of displaced civilians after Russia's move to block aid entering the country with the ongoing civil war from the Bab al-Hawa border crossing – just across the Cilvegözü border gate in Hatay province in Turkey.

Turki Sultan, who was displaced by the regime and its supporters with attacks in his town in Idlib in 2019, told Anadolu Agency (AA) that he took shelter in the Mahatta refugee camp in Idlib on the Turkish border.

He said the Bab al-Hawa border crossing is the "lifeblood" of civilians living in the region.

"If Russia manages to provide humanitarian aid through the Assad regime, it will be like giving a death sentence to 5 million people living in Idlib," he said. "Russia displaced us by bombing us. It killed and destroyed our homes. As if that wasn't enough, it has now set its eyes on the humanitarian aid that came to us from Bab al-Hawa. They are playing with the lives of children and the elderly."

Husain Ali Berjus, another refugee, said his house was destroyed in attacks by the regime and its supporter, Russia, in 2019.

"They bombed us. They destroyed our homes. They displaced us. As it was not enough, they covet the medicine and food that comes to us. Certainly, Russia shouldn't be able to do that," he said.

Abdulsattar Humaydi from Idlib's Saraqib district said he was displaced by the attacks from Iran, ِAssad and Russia, and his family was able to survive thanks to the help from Bab al-Hawa.

"Russia closing the Bab al-Hawa gate to aid means organizing a mass murder of the displaced," he said.

Noting that his purchasing power is low because he works as a day laborer, Humaydi said thanks to the aid, his children receive education and benefit from health services.

Muhammad Ali, also displaced from Saraqib, underlined that humanitarian aid from the Bab al-Hawa gate should continue to allow the displaced to survive.

He said the distribution of U.N. humanitarian aid through the regime at Russia's request means "rewarding the massacres" committed by the Assad regime.