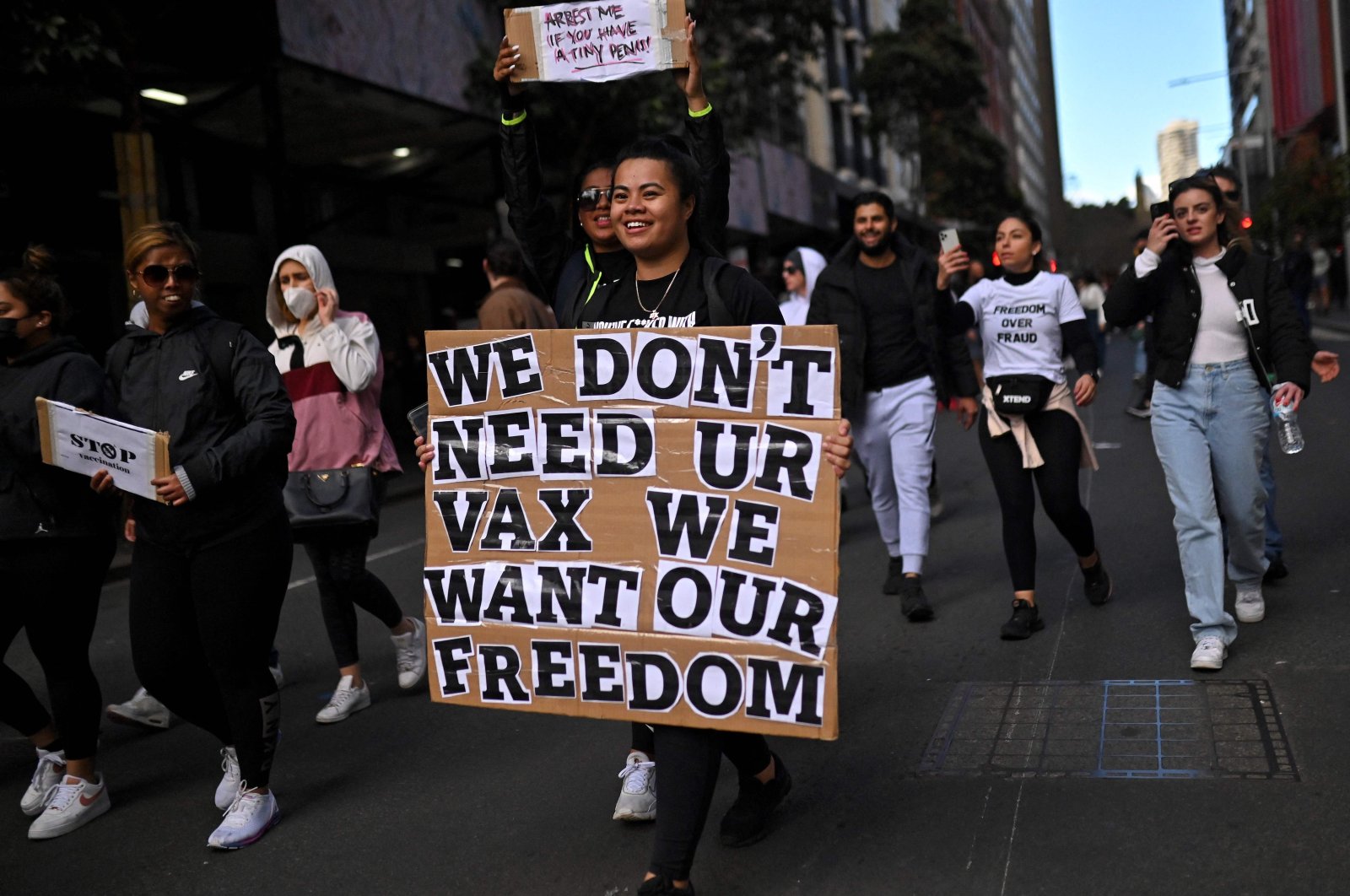 Hundreds of anti-lockdown protestors take to the streets during a rally in Sydney, Australia, July 24, 2021. (AFP Photo)
by Associated Press Jul 24, 2021 2:41 pm
RECOMMENDED

Thousands of demonstrators gathered in Sydney, and other cities across Australia gathered in the streets on Saturday to protest the government's lockdown measures to curb a fresh surge in COVID-19 infections.

The unmasked participants marched from Sydney’s Victoria Park to Town Hall in the central business district, carrying signs calling for “freedom” and “the truth.”

There was a heavy police presence in Sydney, including mounted police and riot officers in response to what authorities said was unauthorized protest activity. Police confirmed several arrests had been made after objects were thrown at officers.

New South Wales (NSW) Police said it recognized and supported the rights of free speech and peaceful assembly, but the protest was a breach of public health orders.

“The priority for NSW Police is always the safety of the wider community,” a police statement said.

The protest comes as COVID-19 case numbers in the state reached another record with 163 new infections in the last 24 hours.

Greater Sydney has been locked down for the past four weeks, with residents only able to leave home with a reasonable excuse.

“We live in a democracy, and normally I am certainly one who supports people’s rights to protest ... but at the present time, we’ve got cases going through the roof, and we have people thinking that’s OK to get out there and possibly be close to each other at a demonstration,” said state Health Minister Brad Hazzard.

In Melbourne, thousands of protesters without masks turned out downtown chanting “freedom.” Some of them lit flares as they gathered outside Victoria state’s Parliament House.

They held banners, including one that read: “This is not about a virus; it’s about total government control of the people.”

A car protest rally is also planned in Adelaide, which is also under lockdown, with police warning they will make arrests over unlawful activity.

By Friday, 15.4% of the nation’s population aged 16 and above have received both jabs for COVID-19.

“We’ve turned the corner. We’ve got it sorted. We’re hitting the marks that we need to make; a million doses a week are now being delivered,” Prime Minister Scott Morrison said. “We are well on our way to where we want to be by the end of the year and potentially sooner than that.”

The federal government said it would send thousands of extra Pfizer doses to Sydney. At the same time, adults in Australia’s largest city are also being urged to “strongly consider” AstraZeneca in view of the scarcity of Pfizer supplies.