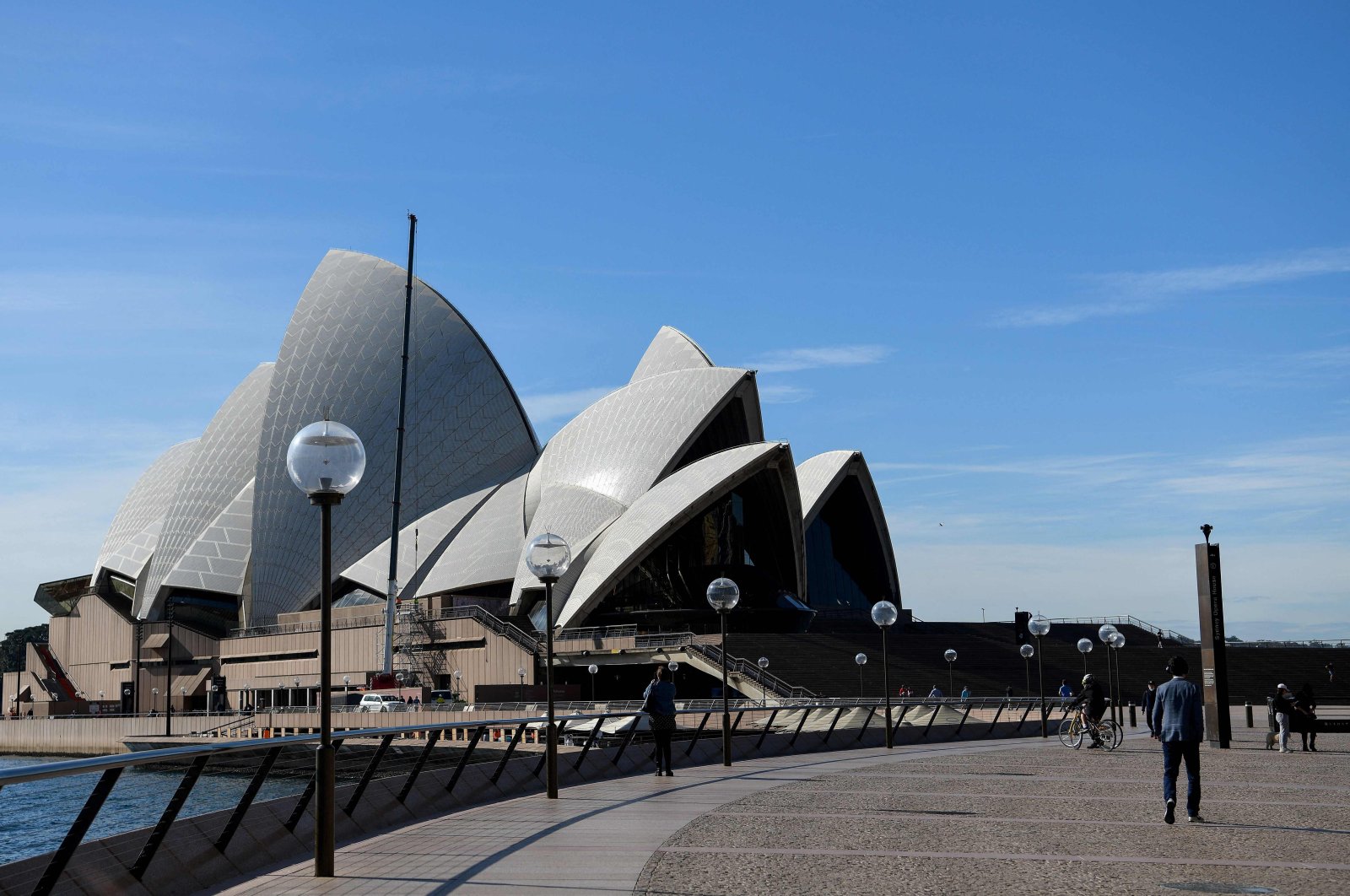 People walk through an unusually quiet Sydney Opera House forecourt as the city remains in lockdown for a second week to contain an outbreak of the highly contagious delta COVID-19 variant, Sydney, Australia, July 6, 2021. (AFP Photo)
by Agencies Jul 08, 2021 10:08 am
RECOMMENDED

The Australian state of New South Wales (NSW) Thursday reported its biggest daily rise in locally acquired cases of COVID-19 this year as officials struggle to stamp out a growing cluster of the highly infectious delta variant amid a slow vaccination campaign.

The spike in cases after two weeks of a hard lockdown in Sydney, Australia's largest city, raised the prospect of a further extension in restrictions, with officials blaming illegal family visits for a continuing rise in infections. NSW reported 38 new local cases, up from 27 a day earlier, with 11 of those having spent time in the community while infectious.

"It's really important for all of us to stay the course and follow the health advice to give us the best chance of getting out of this lockdown in a timely way," Berejiklian told reporters in Sydney, according to Reuters.

Berejiklian said she had no plans to prolong the current lockdown beyond July 16, but warned it would be "an unrealistic assumption" to control the delta variant amid low vaccination rates and people flouting social distancing rules. Just over 9% of people in NSW have been fully vaccinated, while about 29% have had a first dose.

Prime Minister Scott Morrison said the federal government would ensure adequate economic support if the lockdown was extended, saying the state was on "shifting sands" and urged patience.

"I know people are getting tired ... getting frustrated. This is a virus we are dealing with, and it tends to set its own rules," Morrison said during a televised media conference.

A strict stay-at-home order has been in force in Sydney, home to a fifth of the country's 25 million population, since June 26, restricting people's movements and limiting gatherings. Police announced they would be bolstering patrols in the city's southwest to enforce lockdown rules as case numbers rise.

The Australian Medical Association (AMA), meanwhile, warned NSW authorities to avoid lifting any lockdown rules before totally suppressing the delta outbreak. "There is no alternative to elimination for New South Wales ... nowhere in the world has any community been able to live with delta without very significant levels of vaccination," AMA President Omar Khorshid said.

"Nowhere in the world has any community been able to live with delta without very significant levels of vaccination, we are simply not ready to live with this delta strain," he added.

The latest infections took Sydney's total in this outbreak to nearly 400 since the first case was detected more than three weeks ago in a limousine driver who transported overseas airline crew. Australia has fared much better than many other developed countries in keeping COVID-19 numbers low, with just under 30,900 cases and 910 deaths, however, the country's slow vaccination rollout has taken some of the shine off this success. According to Agence France-Presse (AFP) Morison announced 300,000 COVID-19 vaccine doses will be rushed to Sydney Thursday.

Despite several outbreaks, Australia has managed to avoid the worst of the pandemic through snap lockdowns, intensive contact tracing and shutting its borders to the rest of the world.

After a top New South Wales health official suggested it might be impossible to bring the outbreak under control, regional leaders threatened to cut Sydney off from the rest of the country. The premier of Western Australia vowed to indefinitely extend a ban on travelers from the city and surrounding New South Wales "if they don't get it under control."

"I think that's a statement of the bleeding obvious," Mark McGowan said.