UNGA continues with racism, climate and segregation on agenda 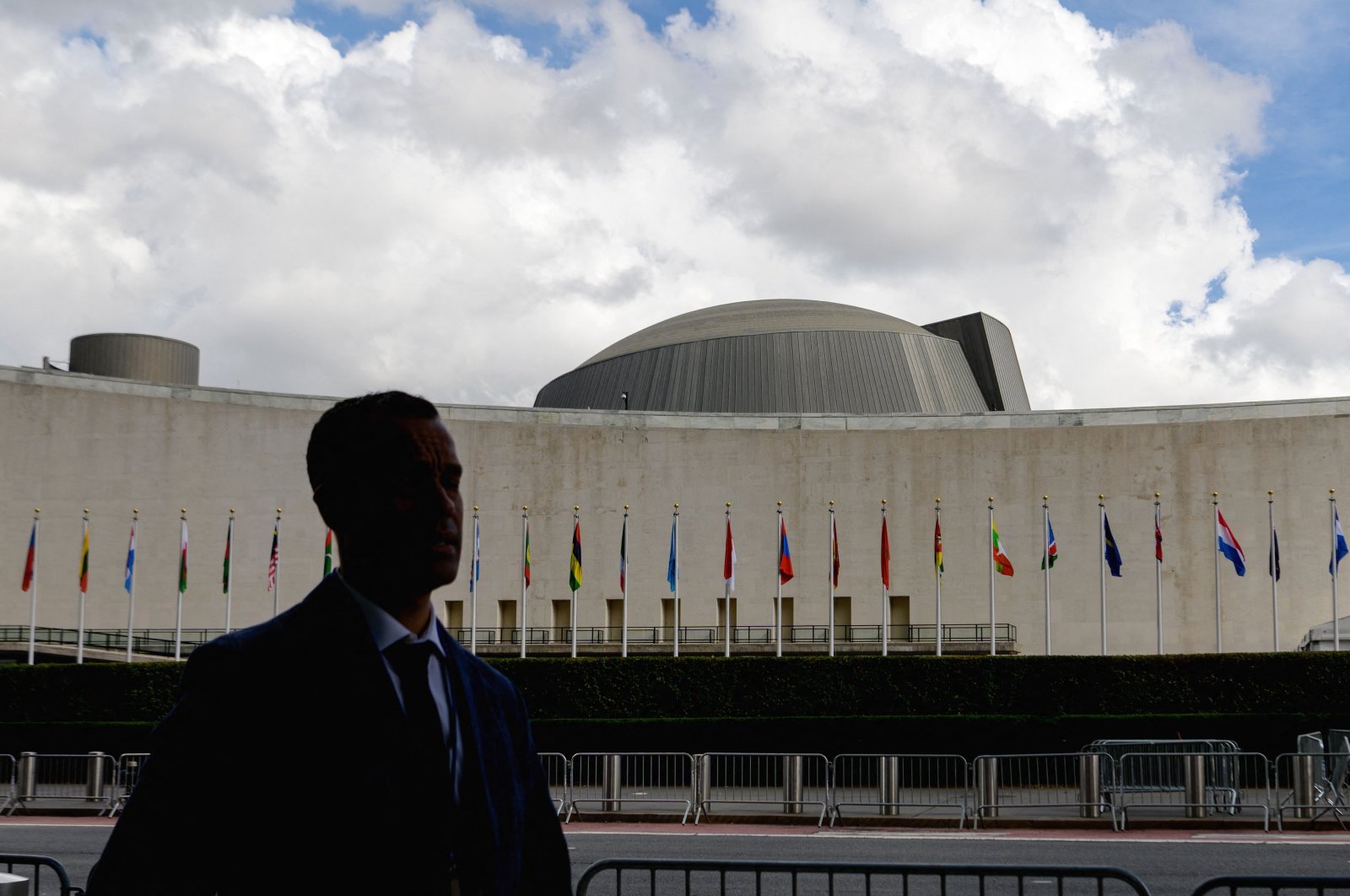 Racism, the climate crisis and the world’s worsening divisions will take center stage at the United Nations on Wednesday, a day after the U.N. chief issued a grim warning that "we are on the edge of an abyss.”

For the first time since the COVID-19 pandemic began, more than two dozen world leaders appeared in person at the U.N. General Assembly on the opening day of their annual high-level meeting. The atmosphere was somber, angry and dire.

China’s President Xi Jinping warned that "the world has entered a period of new turbulence and transformation.” Finland’s President Sauli Niinisto said: "We are indeed at a critical juncture.” And Costa Rica’s President Carlos Alvarado Quesada declared: "The future is raising its voice at us: Less military weaponry, more investment in peace!”

Speaker after speaker at Tuesday’s opening of the nearly weeklong meeting decried the inequalities and deep divisions that have prevented united global action to end the COVID-19 pandemic, which has claimed nearly 4.6 million lives and is still raging, and the failure to sufficiently tackle the climate crisis threatening the planet.

COVID-19 and climate are certain to remain top issues for heads of state and government. But Wednesday’s U.N. agenda will first turn the spotlight on the commemoration of the 20th anniversary of the controversial U.N. World Conference Against Racism in Durban, South Africa, which was dominated by clashes over the Middle East and the legacy of slavery.

The U.S. and Israel walked out during the meeting over a draft resolution that singled out Israel for criticism and likened Zionism to racism – a provision that was eventually dropped.

Twenty countries are boycotting Wednesday’s commemoration, according to the Conference of Presidents of Major American Jewish Organizations, which urged more countries to join them "in continuing to fight racism, bigotry, and anti-Semitism.”

Perhaps the harshest assessment of the current global crisis came from U.N. Secretary-General Antonio Guterres, who opened his state of the world address sounding an "alarm” that "the world must wake up.”

"Our world has never been more threatened or more divided,” he said. "We face the greatest cascade of crises in our lifetimes.”

"We are on the edge of an abyss – and moving in the wrong direction,” the secretary-general warned.

Guterres pointed to "supersized glaring inequalities” in addressing COVID-19, "climate alarm bells ... ringing at fever pitch,” upheavals from Afghanistan, Ethiopia, Yemen and beyond thwarting peace, and "a surge of mistrust and misinformation (that) is polarizing people and paralyzing societies.”

Turkey’s President Recep Tayyip Erdoğan said the pandemic was a reminder "that the entire world is part of a big family.”

"But we failed miserably the solidarity test that we were put to,” he said. "It is a disgrace for humanity that vaccine nationalism is still being carried out through different methods,” and underdeveloped countries and poor segments of societies have been "literally left to their fate in the face of the pandemic.”

As for the climate crisis, Erdoğan said whoever did the most damage to nature, the atmosphere and water, "and whoever has wildly exploited natural resources” should make the greatest contribution to fighting global warming.

"Unlike the past, this time no one can afford the luxury to say, 'I’m powerful so I will not pay the bill’ because climate change will treat mankind quite equally,” the Turkish leader said. "The duty for all of us is to take measures against this enormous threat, with a fair burden-sharing.”

Romania’s President Klaus Iohannis did find a positive outcome from the COVID-19 crisis.

"While the pandemic affected almost all aspects of our lives,” he said, "it also provided us with opportunities to learn, adapt and do things better.”

Two of the most closely watched speeches on Tuesday were delivered by U.S. President Joe Biden and China’s President Xi Jinping. In an Associated Press (AP) interview on Saturday, Guterres warned that the world could plunge into a new and probably more dangerous Cold War if China and the United States don’t repair their "completely dysfunctional” relationship.

"Unfortunately, today we only have confrontation,” he said.

The secretary-general kept that theme in his speech Tuesday saying: "I fear our world is creeping towards two different sets of economic, trade, financial and technology rules, two divergent approaches in the development of artificial intelligence – and ultimately two different military and geopolitical strategies. This is a recipe for trouble.”

Biden said in his U.N. address that the United States was not attempting to be divisive or confrontational.

"We are not seeking a new Cold War or a world divided into rigid blocs,” he said. "The United States is ready to work with any nation that steps up and pursues peaceful resolution to shared challenges even if we have intense disagreements in other areas.”

During his speech, Biden also asserted that two-state solution is the best way for Israel and Palestine to put an end to the decadeslong conflict. Although he did not detail his proposal, Biden said that U.S. support and commitment to Israel's security is "without question and our support for an independent Jewish state is unequivocal."

"But I continue to believe that a two-state solution is the best way to ensure Israel's future as a Jewish democratic state, living in peace alongside a viable, sovereign and democratic Palestinian state," he said. "We're a long way from that goal at this moment but we should never allow ourselves to give up on the possibility of progress."

Speaking later, Xi said disputes among countries "need to be handled through dialogue and cooperation.”

"One country’s success does not have to mean another country’s failure,” Xi said. "The world is big enough to accommodate common development and progress of all countries.”

His announcement followed similar decisions taken by Japan and South Korea earlier this year. Beijing has been criticized for backing coal projects in Indonesia and Bangladesh. Its financial support for such programs pushed world powers to increase pressure and press Beijing to apply to the agreements that were reached during the 2015 Paris climate conference. Although Xi did not give any specific details on its pledge, the initiative could become the beginning of China's role in changing climate change policy ahead of the October U.N. Climate Change Conference (COP26), the key global climate meeting that will take place in the Scottish city of Glasgow.

By tradition, the first country to speak was Brazil, whose president, Jair Bolsonaro rebuffed criticism of his handling of the pandemic and touted recent data indicating less Amazon deforestation. He said he was seeking to counter the image of Brazil portrayed in the media, touting it as a great place for investment and praising his pandemic welfare program, which helped avoid a worse recession last year. Bolsonaro said that his government has successfully distributed first doses to the majority of adults, but doesn’t support vaccine passports or forcing anyone to have a shot. He has said several times in the past week that he remains unvaccinated.

"By November, everyone who chooses to be vaccinated in Brazil will be attended to,” Bolsonaro told the General Assembly. Brazil’s health minister, Marcelo Quiroga, who was with Bolsonaro, later tested positive for the coronavirus and will remain in isolation in the United States, the government said. Quiroga got his first shot of coronavirus vaccine in January. Bolsonaro had COVID-19 last year and has said several times over the last week that he remains unvaccinated. He said getting a shot is a personal, medical decision.