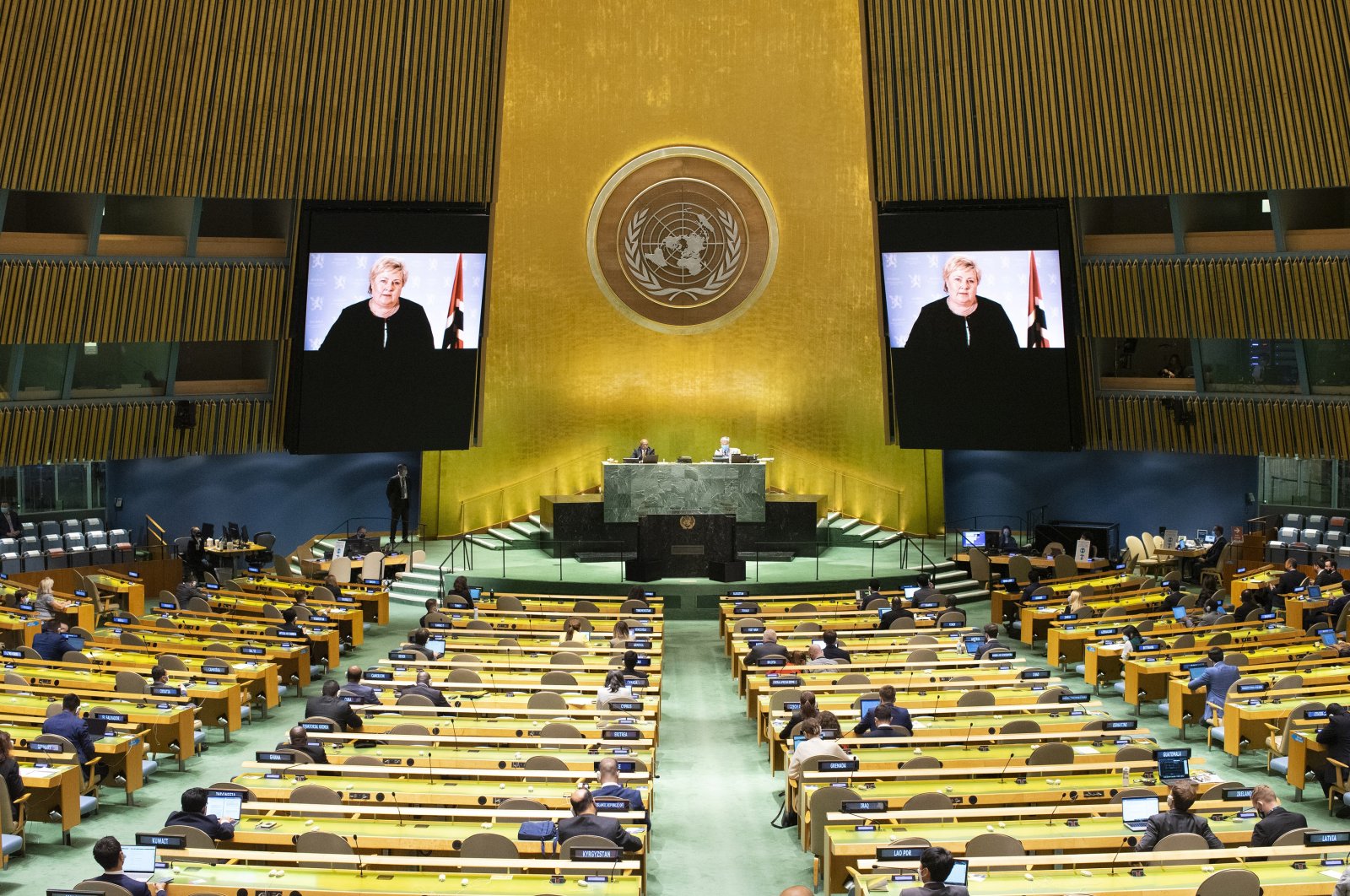 The issue of racism has dominated talks at the United Nations General Assembly, serving as the focal point on the second day in address after address on the immense disparities in the global COVID-19 inoculation drive

The inequity of COVID-19 vaccine distribution will come into sharper focus Thursday as many of the African countries whose populations have little to no access to the life-saving shots step to the podium to speak at the U.N.’s annual meeting of world leaders.

Already, the struggle to contain the coronavirus pandemic has featured prominently in leaders’ speeches – many of them delivered remotely because of the virus. Country after country acknowledged the wide disparity in accessing the vaccine, painting a picture so bleak that a solution has at times seemed impossibly out of reach.

“Some countries have vaccinated their populations, and are on the path to recovery. For others, the lack of vaccines and weak health systems pose a serious problem,” Norway’s Prime Minister Erna Solberg said in a prerecorded speech Wednesday, as The Associated Press (AP) reported. “In Africa, fewer than 1 in 20 people are fully vaccinated. In Europe, one in two are fully vaccinated. This inequity is clearly unfair.”

Countries slated to give their signature annual speeches on Thursday include South Africa, Botswana, Angola, Burkina Faso and Libya.

Also among them will be Zimbabwe, where the economic ravages of the pandemic have forced some families to abandon the long-held tradition of taking care of their older people. And Uganda, where a surge in virus cases have made scarce hospital beds even more expensive, leading to concerns over alleged exploitation of patients by private hospitals.

On Wednesday, during a global vaccination summit convened virtually on the sidelines of the General Assembly, President Joe Biden announced that the United States would double its purchase of Pfizer’s COVID-19 shots to share with the world to 1 billion doses, with the goal of vaccinating 70% of the global population within the next year. Speaking during the virtual summit on the sidelines, Biden described the decision to increase donation rates as a “historic commitment.”

The move comes as world leaders, aid groups and global health organizations have grown increasingly vocal about the slow pace of global vaccinations and the inequity of access to shots between residents of wealthier and poorer nations.

“The United States is buying another half a billion doses of Pfizer to donate to low- and middle-income countries around the world,” he said, adding that the vaccine shipment will be delivered next year. Biden urged member states to join the U.S. in its efforts to help poor nations boost their vaccination rates and called on governments to donate, not sell, shots. He underlined that the U.S. is pledging the donations “with no political strings attached.”

“We’re not going to solve this crisis with half measures or middle-of-the-road ambitions,” Biden said. “We need to go big. And we need to do our part – governments, the private sector, civil society leaders, philanthropists.”

Biden called for a “collective act of science and political will” to combat the pandemic.

“We need to act now to get shots in arms as fast as possible and expand access to oxygen, test, treatments to save lives around the world,” he said, adding his country had already shipped more than 160 million vaccine doses to 100 countries.

The World Health Organization (WHO) says only 15% of promised donations of vaccines – from rich countries that have access to large quantities of them – have been delivered. The U.N. health agency has said it wants countries to fulfill their dose-sharing pledges “immediately” and make shots available for programs that benefit poor countries and Africa in particular.

Over the past year, more than 5.9 billion doses of COVID-19 vaccines have been administered globally, representing about 43 % of the world's population. But there are huge disparities in distribution. Many poor countries struggle to vaccinate even the most vulnerable parts of their populations, and some still do not exceed 2%-3% rates of vaccinations.

During an anti-racism event on Wednesday commemorating a landmark but contentious conference 20 years ago, Congo's President Felix Tshisekedi pointed to the fact that only about one in 1,000 people in his country have received at least one shot.

The disparity in vaccine availability around the world “clearly does not demonstrate equality between the countries and peoples of this world,” Tshisekedi said.

"We need leaders like President Biden to put billions of doses on the table and deliver the goods; otherwise, this is just another empty gesture, and lives will continue to be lost," Amnesty International chief Agnes Callamard said.

The group said AstraZeneca, BioNTech, Johnson & Johnson, Moderna, Novavax and Pfizer had all refused to share doses or technology to enable more of the world to get COVID-19 jabs. Most people in the rich world have been inoculated, but parts of Latin America, Africa and Asia have plunged into renewed crises with "tens of thousands of preventable deaths every week," Amnesty International said.

Out of 5.76 billion doses administered worldwide, only 0.3% have gone to low-income countries, with over 79% heading to upper-middle and high-income countries, it said. In letters sent to Amnesty International, all the companies pledged their support for human rights, but the report said their actions violated that commitment.

AstraZeneca and Johnson & Johnson were selling their doses at cost price, it noted. But all of the six companies had fought a bid by India and South Africa to waive vaccine-related intellectual property rights at the World Trade Organization (WTO), despite receiving hefty government support themselves. Amnesty International launched a new campaign which it said was backed by the WHO and U.N. High Commissioner for Human Rights "to hold states and big pharma to account."

"We're calling on states and pharmaceutical companies to change course drastically and to do everything needed to deliver two billion vaccines to low and lower-middle-income countries starting now," Callamard said. "Profits should never come before lives," she said, according to Agence France-Presse (AFP). "No one should spend another year suffering and living in fear."

Ukrainian President Volodymyr Zelenskyy likewise called out failures in sharing coronavirus vaccines during his speech Wednesday night, his hopes in 2020 of “effective multilateralism and effective international solidarity” dashed a year later, “where one thing is to share objectives and quite another is to share vaccines.”

Also on Thursday, foreign ministers are due to assess climate change as a security issue when the Security Council, the U.N.’s most powerful body, meets in the morning.

Climate change has been a major focus during this week’s General Assembly gathering. World leaders made “faint signs of progress” on the financial end of fighting climate change in a special United Nations feet-to-the-fire meeting Monday, but they didn’t commit to more crucial cuts in emissions of the heat-trapping gases that cause global warming.