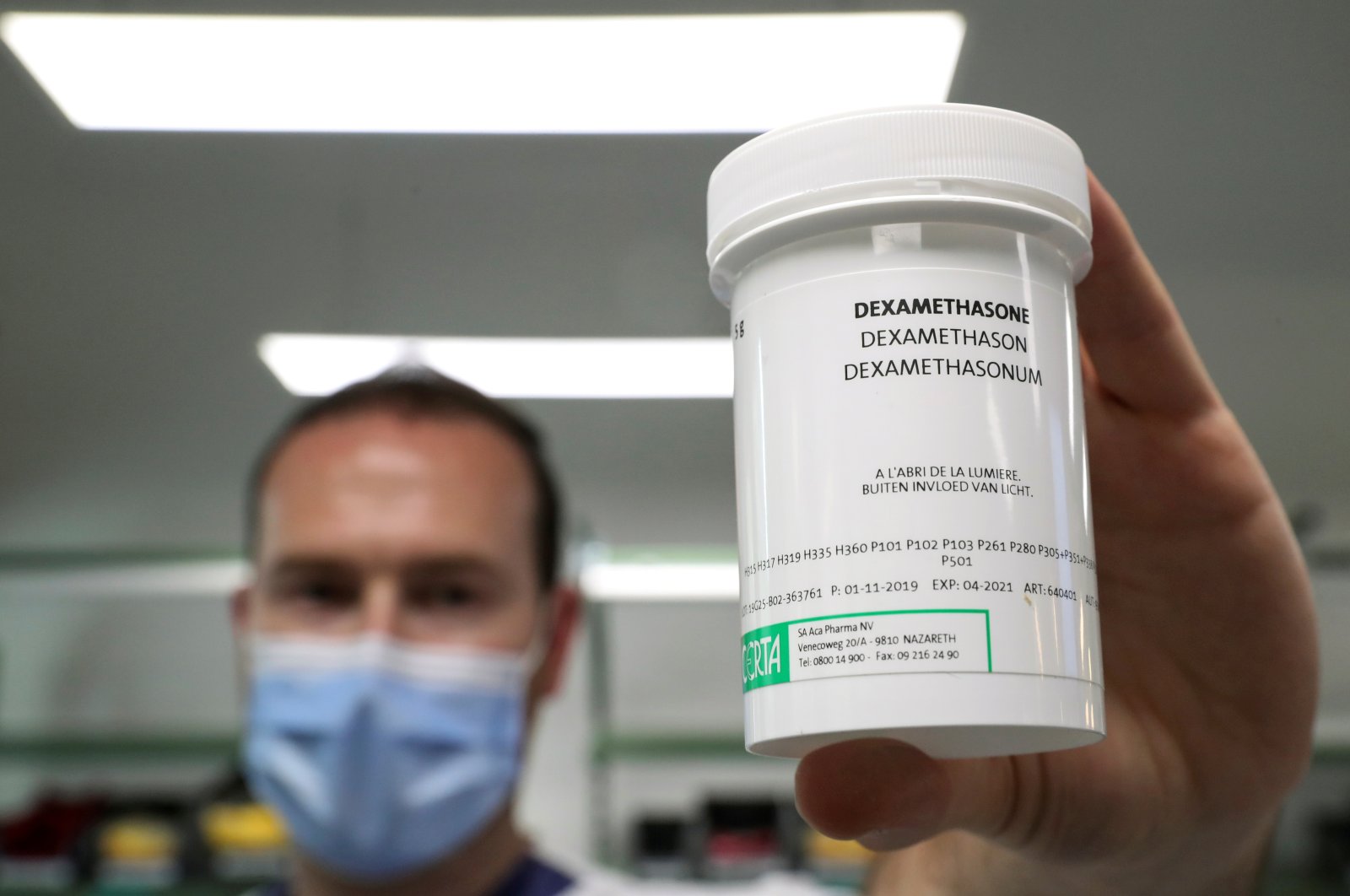 A pharmacist displays a box of Dexamethasone at the Erasme Hospital amid the coronavirus outbreak, in Brussels, Belgium, June 16, 2020. (Reuters Photo)
by French Press Agency - AFP Jun 22, 2020 9:27 pm
RECOMMENDED

The World Health Organization (WHO) called on Monday for a rapid increase in production of dexamethasone, a cheap steroid which has been shown to reduce deaths in critically ill coronavirus patients.

WHO chief Tedros Adhanom Ghebreyesus said demand had already surged after a British trial of the drug was publicized but he was confident production could be ramped up.

Some 2,000 patients were given the drug by researchers led by a team from Oxford University, and it reduced deaths by 35% among the most sickly, according to findings published last week.

"Although the data are still preliminary, the recent finding that the steroid dexamethasone has life-saving potential for critically ill COVID-19 patients gave us a much-needed reason to celebrate," Tedros told a virtual news conference in Geneva.

"The next challenge is to increase production and rapidly and equitably distribute dexamethasone worldwide, focusing on where it is needed most."

Dexamethasone has been on the market for over 60 years and usually serves to reduce inflammation.

The WHO emphasizes that dexamethasone should only be used for patients with severe or critical diseases under close clinical supervision.

"There is no evidence that the drug works for patients with mild disease or as a preventative measure, and it could cause harm," Tedros warned.

The U.N. health agency boss insisted that countries with large numbers of critically ill coronavirus patients needed to be prioritized.

But Tedros warned that suppliers had to guarantee quality "as there is a high risk of substandard or falsified products entering the market."

The number of confirmed coronavirus cases worldwide has topped 9 million and killed more than 468,500 people since the outbreak began in China last December, according to an Agence France-Presse (AFP) tally using official sources.

"Almost every day we reach a new and grim record," said Tedros, noting that more than 183,000 new cases were reported to the WHO on Sunday – easily the most in a single day so far.

Some countries were witnessing a rapid increase in cases and deaths, he said, while others that had successfully suppressed transmission were now seeing an upswing in cases as they reopened their societies and economies.

After the initial outbreak in China, the epicenter of the virus has moved from East Asia to Europe and now to the Americas.

But its presence in Europe seems to go back much earlier than previously thought, with a study showing that fragments of the new coronavirus were in the wastewater in Milan and Turin back in December.

"Clearly there is a chance that this virus was circulating in northern Italy obviously before anyone had realized that it had been," said WHO emergencies director Michael Ryan.

But he added: "I don't think that, at this point, it changes the hypothesis of disease origin."

Scientists believe the virus originally jumped from animals to humans, with the focus on a market that sells exotic animals for meat in the Chinese city of Wuhan.

Maria Van Kerkhove, the WHO's technical lead on COVID-19, said studies in northern Europe seemed to show that humans had been infected by mink.

Dutch authorities reported two possible cases in May where humans were believed to have caught the virus from the animals, which are farmed for their fur.

"There are some minks that have been found positive in the Netherlands and in Denmark," said Van Kerkhove.

"What we understand from these investigations, which are currently ongoing, is that there were... people who infected the mink – and in turn, some of these minks infected some people."

"It is very limited in terms of the transmission that is happening."