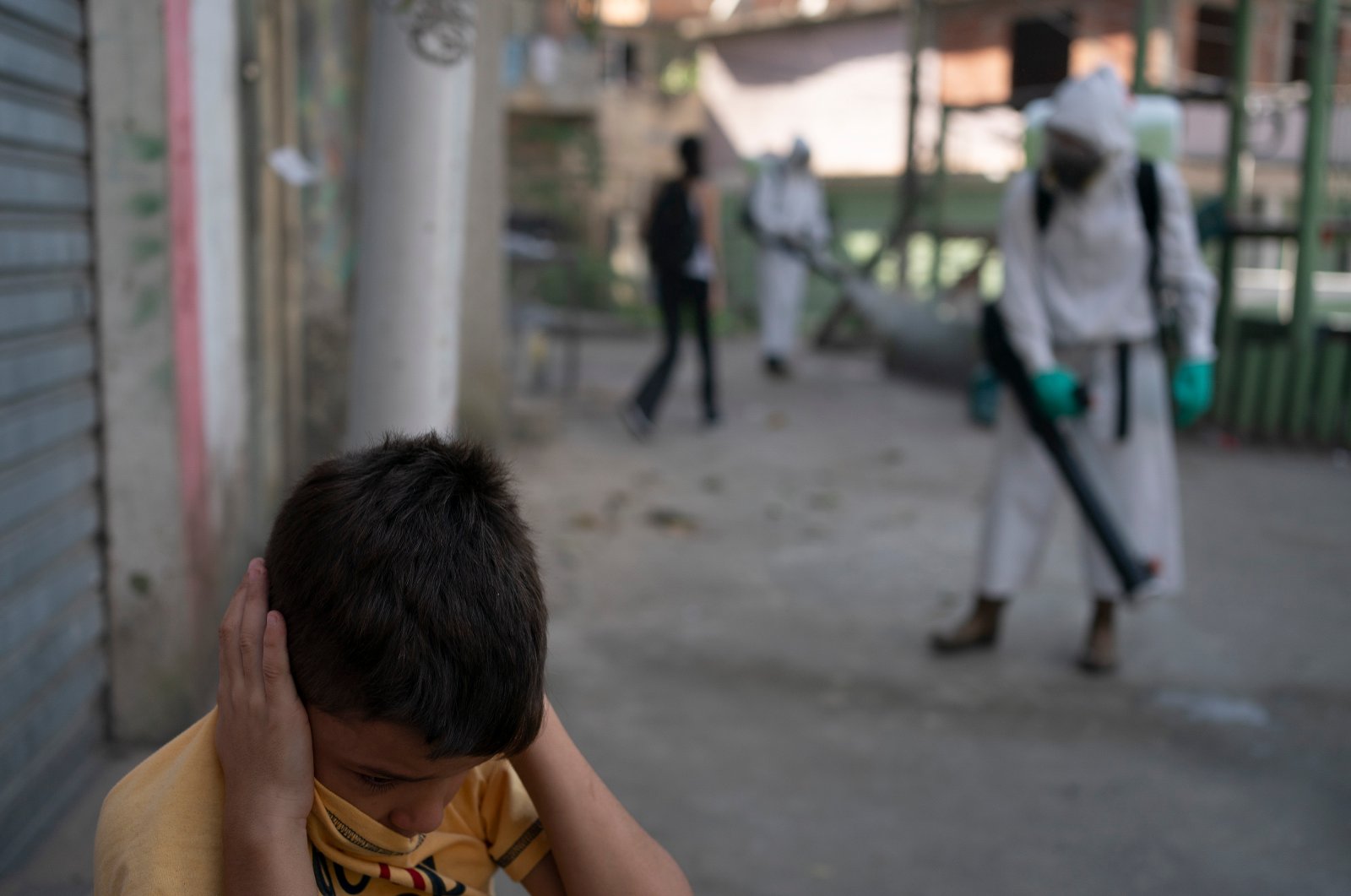 A boy protects his ears as a volunteer sprays disinfectant in an alleyway to help contain the spread of the coronavirus in the Babilonia slum of Rio de Janeiro, Brazil, July 12, 2020. (AP Photo)
by French Press Agency - AFP Jul 13, 2020 10:02 pm
RECOMMENDED

Too many nations are mismanaging their coronavirus response, placing a return to normality a long way off, the World Health Organization (WHO) warned Monday as Latin America recorded the world's second-highest death toll.

With new infections spreading rapidly, many countries were reimposing restrictions on Monday, locking down towns and cities and reintroducing measures to halt the spread of the sickness.

But WHO chief Tedros Adhanom Ghebreyesus warned that too many countries were "headed in the wrong direction" with governments giving out mixed messages that were undermining trust.

"There will be no return to the 'old normal' for the foreseeable future," he said, warning that without governments adopting a comprehensive strategy, the situation would get "worse and worse and worse."

Since the start of July, nearly 2.5 million new infections have been detected across the globe, with the number of cases doubling over the past six weeks, according to an Agence France-Presse (AFP) tally based on official figures.

With cases surging in Latin America, the region on Monday declared a total of 144,758 deaths, passing the 144,023 recorded in the U.S. and Canada.

It now stands second only to Europe, where 202,505 people have died.

Over the weekend, U.S. President Donald Trump wore a face mask in public for the first time, in the world's worst-hit country where 135,171 people have died.

Mexico has become the country with the fourth-highest number of COVID-19 fatalities in the world, climbing to a total of 35,006 deaths and surpassing Italy.

And Iran, the worst-hit country in the Middle East, counted more than 200 new deaths on Monday, pushing its toll over 13,000.

In Spain, regional officials were in a standoff with courts after a judge suspended a lockdown just hours after it was imposed on 160,000 people in the Catalonia city of Lerida following a sharp rise in cases.

Despite calls to respect the closure, many people were on the streets by mid-afternoon, with shops and bars still open, an AFP correspondent said.

It was the first such order given since Spain's lockdown ended on June 21 and the situation in the northeastern city was the most worrying among 120 outbreaks across a country where the virus has killed more than 28,400 people.

South Africa has also reimposed a nationwide curfew to prevent a "coronavirus storm" from ravaging the continent's hardest-hit nation, where new infections have topped 12,000 per day.

In Asia, the Philippines imposed a two-week lockdown on 250,000 people in the capital Manila as new infections soared, and Hong Kong stepped up precautions to combat a sudden spike in infections.

Restaurants there can only serve takeaway food after 6 p.m., gyms, nightclubs, karaoke bars and beauty salons were shuttered and public gatherings were restricted to four people.

And two U.S. Marine bases on Japan's Okinawa island have been locked down after a spike in cases with dozens infected and local officials expressing "serious doubts" about the U.S. military's containment efforts.

Across the globe, the pandemic has infected nearly 13 million people, killed more than 566,000 and triggered massive economic damage in the seven months since it was detected in the Chinese city of Wuhan.