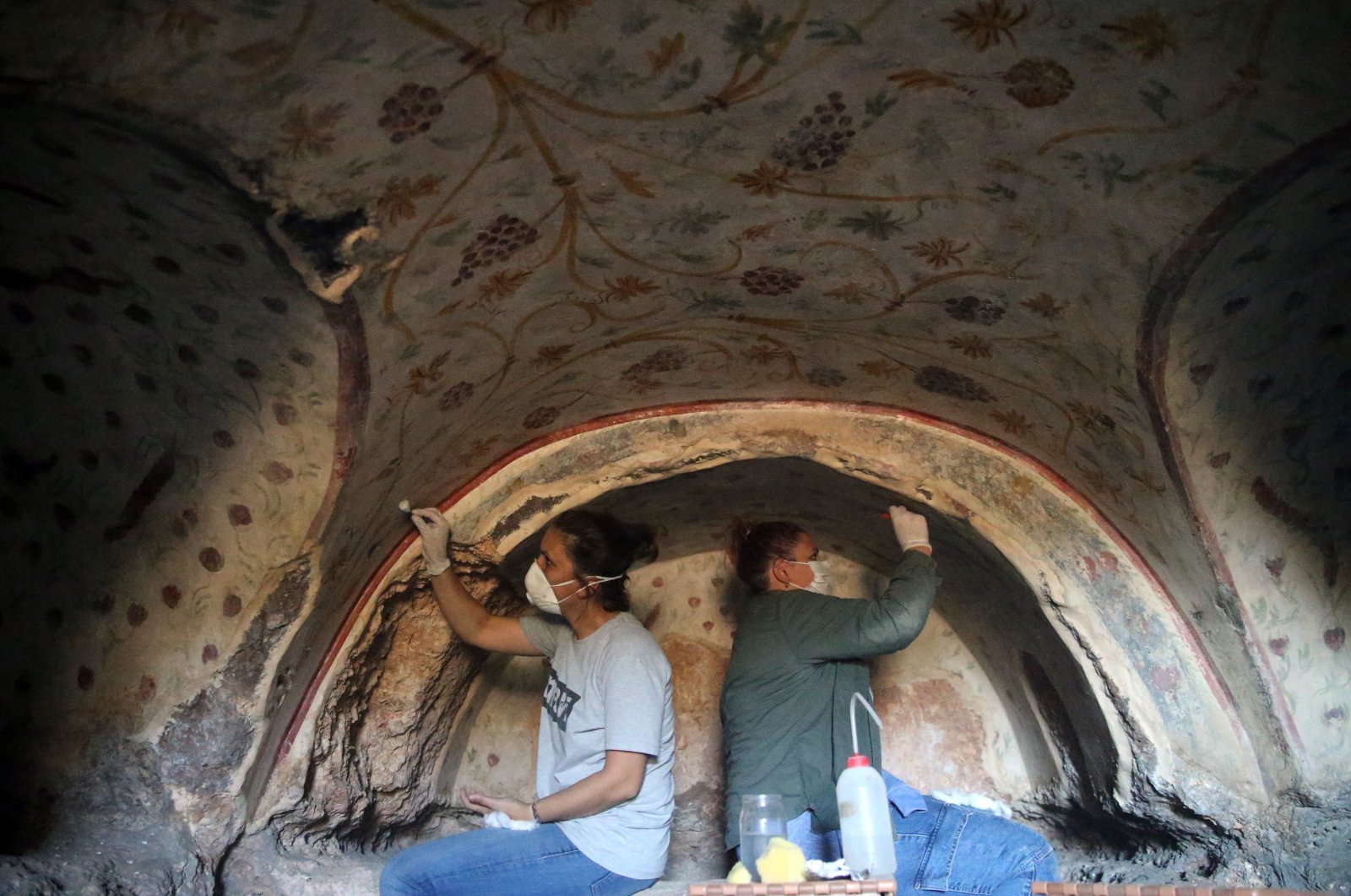 A total of 400 rock-cut tombs that are approximately 1,800 years old and decorated with various motifs were found in the ancient city of Blaundus, located in the Ulubey district of the western Anatolian city of Uşak.

Excavations continue in the ancient city of Blaundus, situated on a peninsula surrounded by deep valleys, under the presidency of professor Birol Can of Uşak University's Archaeology Department. While archaeological digs have revealed many Hellenistic, Roman and Byzantine artifacts in the ancient city to date, this year’s work was focused on the areas of the necropolis. These excavations unveiled 400 rock tombs featuring multiple rooms, the walls of which were decorated with special motifs of vine branches, bunches of grapes and flowers.

Speaking to Anadolu Agency (AA), excavation head Can said that Blaundos was established on a safeguarded hill. “There is only one entrance to the city from the north, and the city is surrounded by a valley reaching a depth of 70 meters (300 feet) in some points. We determined rock-cut tombs in our recent works conducted in the steep sides of the valley. From the analysis of materials and bones we found in this area, we understand that these rock tombs were intensely used after the A.D. second century. We can say that they were used as family graves.”

Can's team believes that there are also a large number of graves underground in the ancient city. Noting that there are different types of rooms inside the rock tombs, Can continued: “There are arched sarcophagi carved into the bedrock in front of the walls of each room. Apart from these, places that are thought to be used for funeral ceremonies were also found inside the rock tombs. The main door of the tombs was closed with a marble door and reopened during burial or ceremony times in the past.”

Emphasizing that their priority is the preservation of the tombs, Can said that they also prepare projects for the promotion and opening of these structures. Stating that there will be a walking path starting from the city entrance and going around these tombs, Can said: "Within this project, plans have been made to illuminate the area of the tombs. We are planning to make the entire necropolis visitable in the future."

Blaundus was built on the top of a hill overlooking Grand Ulubey Canyon, which has strategic importance for the Lydia-Phrygia border. Although the city was founded in the Hellenistic era, due to earthquakes that caused widespread damage, the city was rebuilt and fashioned into one of the more significant Roman-era urban centers in the region.

There are many public and religious buildings, such as temples, a theater, a stadium, a gymnasium and a basilica. The structure of an 8-kilometer (5-mile) aqueduct also remains that served to bring fresh water to the city.