A look inside restoration of Byzantine, Ottoman-era Yedikule Fortress 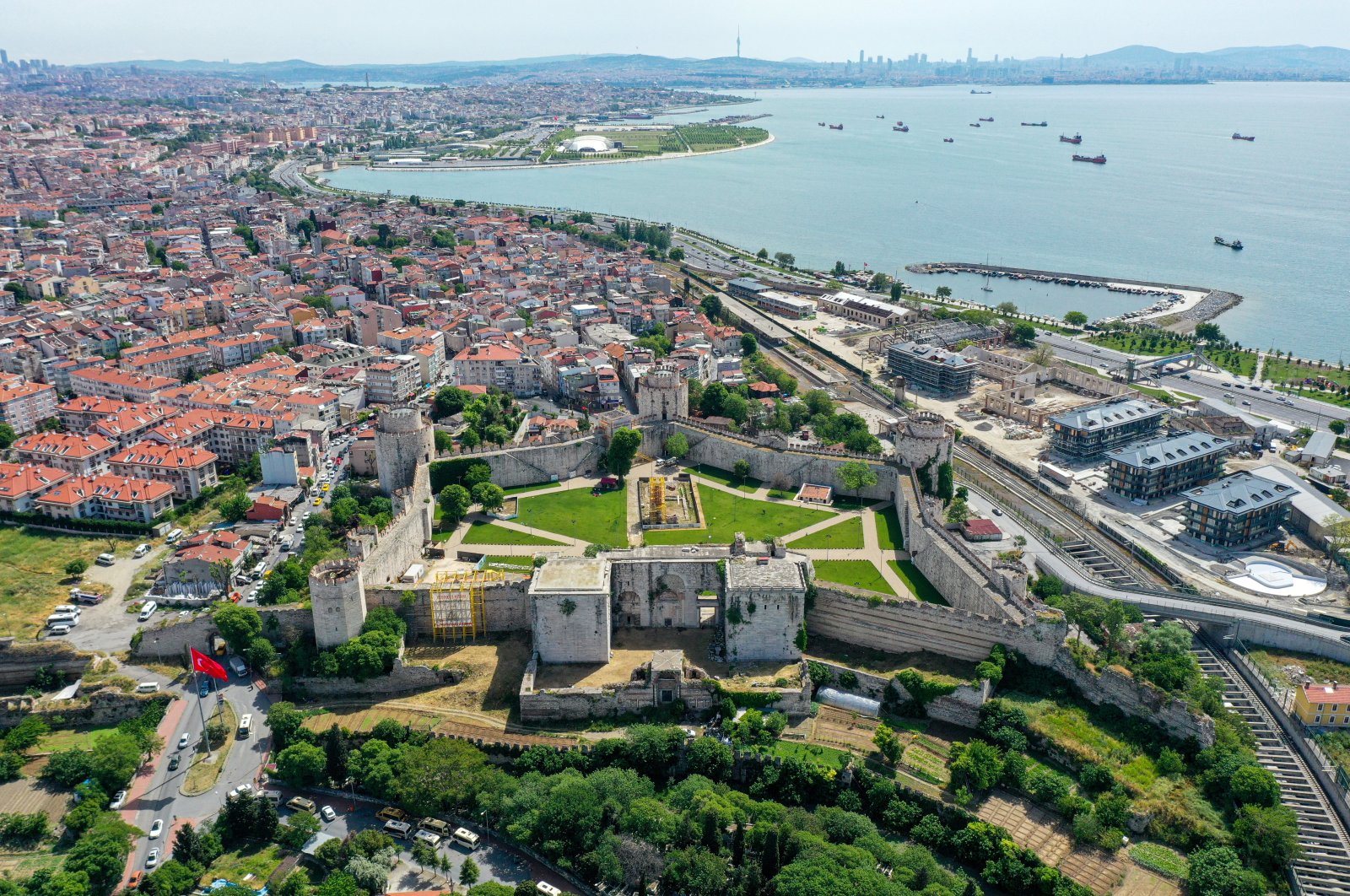 As meticulous restoration progresses to turn the fortress, which challenged the sands of time in all its glory, into a center for international cultural and artistic events, let’s learn about the details of the ongoing works along with its historical background

Istanbul’s Yedikule Fortress, which still bears rare examples of Byzantine and Ottoman architecture, is one of the oldest open-air museums in Turkey. Comprehensive restoration work was launched last year in the fortress and experts have meticulously been sustaining their works to turn this historical structure into a center for cultural and artistic events.

The historical Yedikule Fortress, meaning "Fortress of the Seven Towers," was previously restored by the General Directorate of Foundations between 1958 and 1970. The latest restoration, which has been ongoing for 1 1/2 years, is challenging due to the monumental nature of the work.

The first stage of the fortress’s restoration includes the strengthening of the inner wall between Sultan Ahmet III Tower and North Pylon Tower and archaeological excavations in the middle courtyard and landscaping works under the supervision of the Istanbul Turkish and Islamic Arts Museum Directorate.

In line with the projects approved in 2017 within the scope of the restoration’s first stage, landscaping works were carried out in the middle courtyard and walking paths were created. Yedikule Fortress Fatih Mosque, which was built after the conquest of Istanbul and is one of the oldest mosques in the city, was damaged over time and in danger of collapsing. Therefore, a suspended scaffolding was installed and its surrounding area was excavated. Thanks to these excavations, the base of the mosque was later uncovered. Unique Byzantine and Ottoman paving stones were also unearthed during archaeological excavations in the middle courtyard.

The second stage of the restoration includes reparations of the inner wall between the entrance tower and the south pylon, which was previously restored by the architect Cahide Tamer, and the ruined seventh tower. The restoration of the entrance tower and the reconstruction of its flooring and cone, which fell into ruin, are currently ongoing. Moreover, an observation terrace will be created on the south pylon, including the installation of guard rails for domestic and foreign tourists.

Fortress to be memory of city

Fatih District Mayor Ergün Turan provided information about the restoration work in the fortress to Anadolu Agency (AA). Noting that Yedikule Fortress is one of the most important historical places in Istanbul and has many functions in the historical process, Turan said that they aim to transform this magnificent fortress into a new cultural hub of Istanbul.

“While we are sustaining our restoration, visitors can watch us work. It is a live restoration. After we complete our studies, we will present a new cultural center of historical significance to Istanbulites. Yedikule Fortress was long forgotten in the city’s memory. It will become part of the city again following the restoration,” the district mayor added.

There was an Ottoman neighborhood within the fortress in the past, and Yedikule Fortress Fatih Mosque was the first mosque built after the conquest of Istanbul. According to Turan, the restoration teams will not rebuild the neighborhood but will instead produce a removable reproduction. This way, visitors will get a glimpse of the historical days in the fortress.

Turan also stated that the teams are working hard to transform it into a site that all guests can enjoy. “We will turn Yedikule Fortress into a place where visitors can watch restoration works now and cultural and artistic activities can be held in the future. It will be an important destination in Istanbul where tourists will most likely spend half a day at least."

Master architect Sarı, a member of the restoration advisory board, also said Yedikule Fortress is a monumental artifact that has the biggest green area after Topkapı Palace on the historical peninsula of Istanbul. Noting the restoration is split into two sections, Sarı continued: “The Golden Gate, which we consider to have been commissioned by Roman Emperor Theodosius I, forms the first part of the fortress. In the second part, there are four towers from the Byzantine period and three Ottoman ones that were built in the later period. This part was used as an inner castle for a long time. The Ottomans used the tower on the left according to the entrance gate as the treasury gate and the tower on the right as the tower of inscriptions.”

While discussing the previous, comprehensive restoration of the fortress during the time of architect Tamer, Sarı said: “A dense cement was used for this restoration as it was an accepted technique at that time. This material damaged the monument. Therefore, in the parts where we started the restoration, we first started to remove the cement from the monument. However, this is a difficult job and will take roughly 20 years.” After removing the cement, teams restore the walls with Khorasan mortar.

Explaining that the dungeons of the fortress, including the one where Sultan Osman II, also known as Osman the Young, was strangled, are located in the southern block of the Golden Gate, Sarı said that according to records, prisoners remained in these dungeons until the 1820s, and there were inscriptions carved by the prisoners on the walls.

Noting that these dungeons are significant structures in terms of architectural history, the architect said they want to conduct a detailed search and restoration of that section as well. Mentioning that a well from the Byzantine period is also located in the dungeons, Sarı stated that it was called the “bloody well” as the heads of those found guilty were thrown into it following executions in the past. The restoration teams also plan to carry out a thorough excavation of it.

Yedikule Fortress consists of the Golden Gate, which was built as a triumphal arch in the Byzantine period in 390 during the reign of Theodosius I, and the three towers added to it after the conquest of Istanbul and a five-pointed, star-shaped, inner fortress formed by the city walls.

The building, which is now called Yedikule Fortress Museum, had different names throughout the Ottoman period. The famous Golden Gate was the most important entrance gate of Byzantium, where the emperors returning from the campaigns entered the city with ceremonies.

In addition to being used as a state prison during the Ottoman Empire, the fortress also hosted the first treasure and valuable documents of the Ottoman Empire. The towers of the fortress are called South Pylon (the tower where Sultan Osman II was martyred), North Pylon, Sultan Ahmed III Tower, North Tower (Treasure Tower), Inscriptions Tower, South Tower and Ruined Byzantine Period Tower.