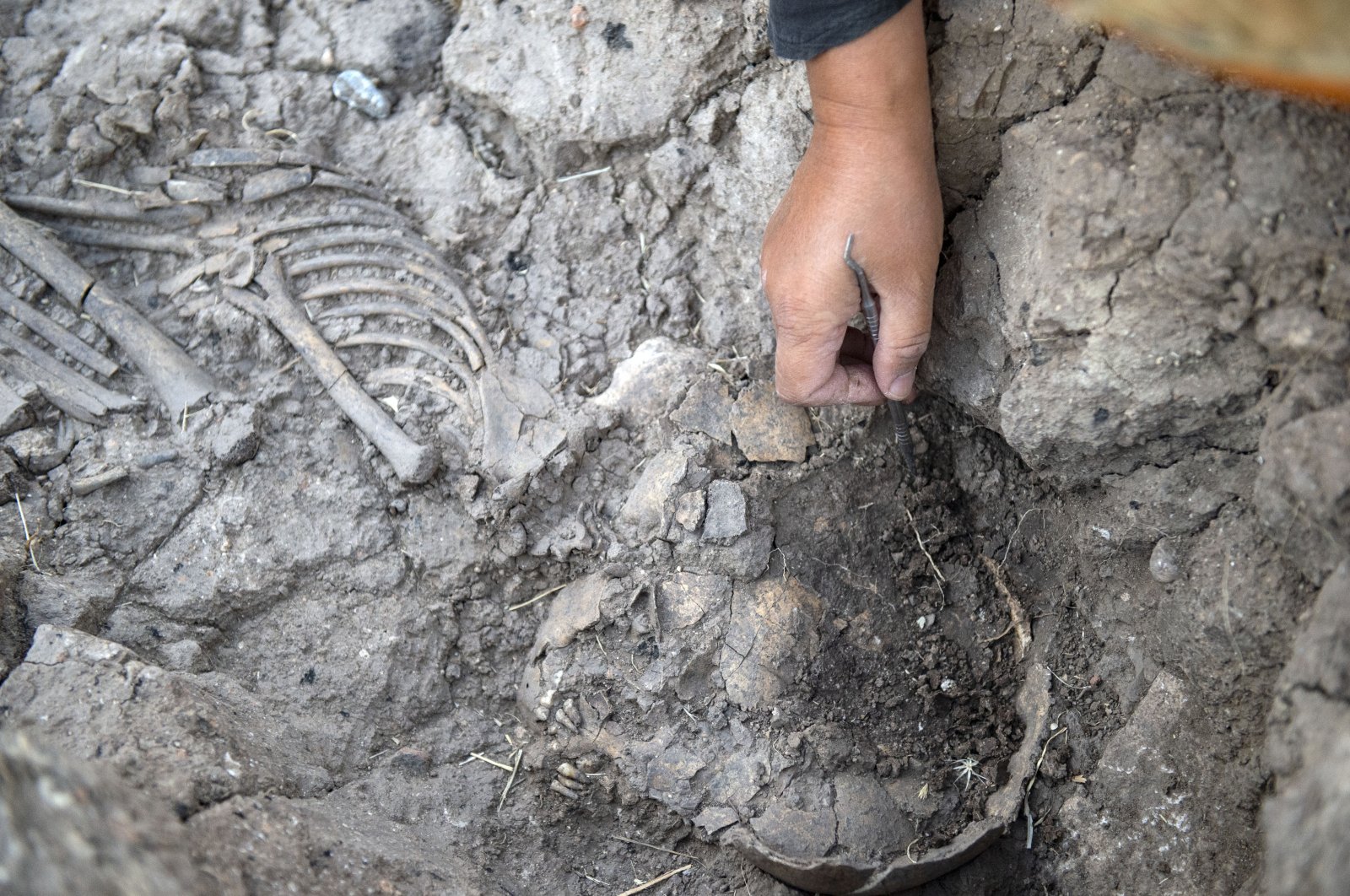 An archaeologist inspects the remains of a skeleton during excavations at the Tozkoparan Mound site in Tunceli, Turkey, Aug. 11, 2021. (AA Photo)
by DAILY SABAH WITH AA Aug 12, 2021 11:05 am

Ongoing excavations at the thousands of years old Tozkoparan mound, a first-degree archaeological site located in the Pertek district of Turkey's Tunceli province, have led to the discovery of the skeleton of a child, which has now been taken to a museum for preservation.

A team of 15 people, consisting of anthropologists, archaeologists, art historians and student interns, have been taking part in the excavations headed by Tunceli Museum and supported by the Ministry of Culture and Tourism. Academics from various universities have also been advising on the project.

The teams had been working meticulously five days a week, paying special attention not to damage the historical texture where they unearthed the skeleton, believed to be a child.

The fragments and remains of the skeleton have been placed in the protection of the Tunceli Museum.

Pottery made of terracotta and tools and arrowheads made of obsidian, bone and stone were also discovered during the excavations. The artifacts will shed light on the history of the site and will be exhibited in the museum.

Yasemin Yılmaz, a research associate at the Department of Archaeology of Düzce University's Faculty of Arts and Sciences, said that every archaeological period since the Lower Paleolithic era had been identified in Tunceli where they have been conducting surveys for about six years.

Yılmaz said they had completed the survey works for this year and that they were carrying out excavations at the Tozkoparan Mound, in the destroyed areas of the site, with a delegation under the supervision of academics from universities in Tunceli, Düzce, Erzurum and Diyarbakır.

“We are trying to define the boundaries of the protected areas here,” Yılmaz said and added, “Archaeological remains began to emerge just under the surface soil. A human skeleton was uncovered on the third day of the excavation. It belongs to an individual in childhood.”

Yılmaz elaborated on the recent discovery of the skeleton. “An individual lying shrunken in an oval-shaped pit dug into the ground, in the north and south lines. This skeleton belongs to an ancient society, and it is very important because it provides us with direct information about that period."

Yılmaz stated that interdisciplinary studies have been carried out on excavated skeletons in recent times. “We can determine the age of the skeletons and their nutritional system. If the diseases they had suffered left traces on the bones, we can determine them. Of course, although we cannot obtain much data with a single sample, it will provide us a good beginning."

She noted that they completed the archaeological chronology of the city with the surveys and that the results were pleasing.

“Fest Travel supported us in the surveys. As of this year, we completed our surveys as we achieved all our goals. Tunceli is on the transit route of many civilizations. Our findings also confirmed this. We started preparing our findings for publication,” she said.

Yılmaz stated that with the publication of their scientific articles, the city would attract the attention of history and archeology enthusiasts.

Kenan Öncel, excavation director and Tunceli museum director, emphasized that with the opening of the museum in the city, archaeological work gained momentum.

Öncel noted that they started the first “rescue” excavation in Tozkoparan Mound within this scope.

“We are planning to work in the area for about another month. Our aim is to determine the extent and boundaries of the mound. We continue our work in this direction,” he said.

“Tunceli Museum is currently the newest museum in Turkey,” Öncel added. “The artifacts recovered in this rescue excavation, will enrich the collection of Tunceli Museum and will also contribute significantly to the emergence of the province's historical and cultural layers.”