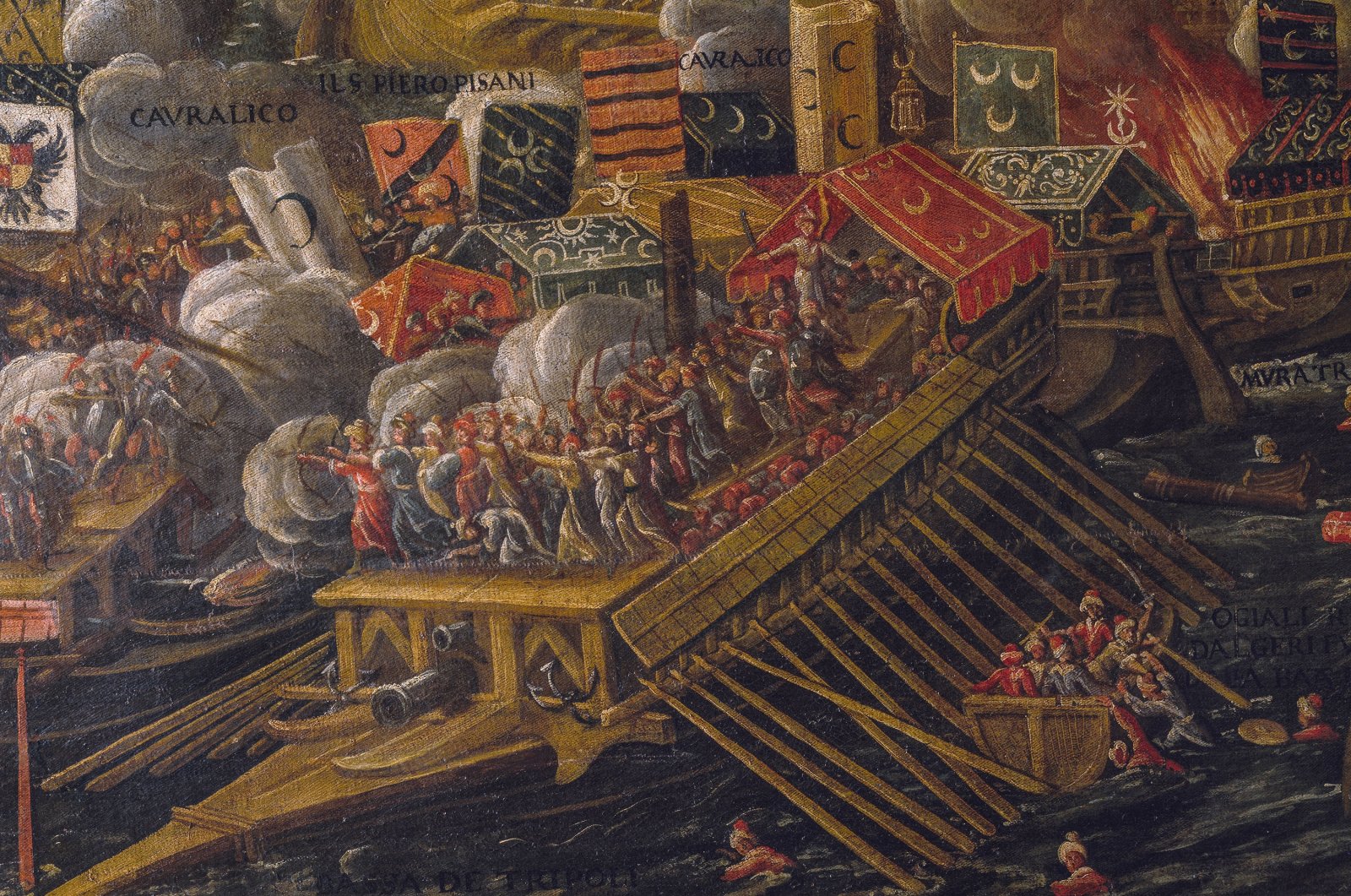 A painting depicting a Turkish warship during the Battle of Lepanto. (Getty Images)
by ahmet tekin Sep 27, 2021 1:09 pm

Did the Holy League really inflict a major defeat on the fleet of the Ottoman Empire in the naval war of Lepanto or was it just a feat of arms on the surface?

The allied Christian naval forces under the name the Holy League, a coalition formed by the Spanish Empire, Venice and the Papal States, clashed with the fleet of the Ottoman Empire in Inebahtı (Naupactus) on Oc. 7, 1571. Taking place 450 years ago, the Battle of Lepanto – known as the Inebahtı Savaşı by Turkish people – was the greatest naval battle of the 16th century, if not of the entire early modern period. Miguel Cervantes, who was a combatant of the allied forces, noted the battle as the most important event in centuries. It was one of the greatest conflicts with oar-propelled vessels and the first significant victory over a Turkish fleet.

The Ottoman Empire agitated the Venetians with the Great Siege of Malta in 1565 and the conquest of Cyprus in 1570. In this atmosphere, the Republic of Venice joined the league initiated by Pope Pius V, the then-head of the Catholic Church and ruler of the Papal States, to strike a major blow to the Ottoman fleet. The allied forces had political and economic concerns. Pope Pius V aimed to restore control of the central Mediterranean under Christendom; Venice aimed to secure its colonies in the Levant, especially in Cyprus, conquered by Ottomans in 1570; and Spain hoped to get rid of the threats endangering the coast of Spain and Italy. By the fusion of these objectives, the aim was to stop the Mediterranean expansion of the Ottomans and to prevent the Mediterranean from turning into a grand Turkish naval port. Besides, it was also boastworthy for the forces to have a victory against the “undefeatable” Turkish Empire. That is why Fernand Braudel, a prominent French scholar of the 20th century, wrote “the victory can be seen as the end of a period of profound depression, the end of a genuine inferiority complex on the part of Christendom.”

Ottomans were well-informed about the preparations of the West. They had two fleets ready, one to prevent allied aid to Cyprus and the second to supply Magosa (Famagusta), which had not yet been captured.

The main difference between the Ottoman and Holy League navies before the battle was that the Ottoman navy was decimated after long exhausting battles while the allied navy had a fresh force.

The battle lasted for hours, with fierce fighting lasting from noon until sunset in the evening. Only once it was over could the violence and bloodshed of the battle be taken in. The Ottoman fleet lost around 200 ships and more than 30,000 men. The grand admiral of the army, Müezzinzade Ali Pasha, and many reis (captains) died. The allied navy had 8,000 dead and 21,000 wounded, with 15 galleys sunk and many heavily damaged. Naval commander John of Austria was wounded, “Don Quixote” author Miguel Cervantes lost his left arm, and many Spanish, Italian and Maltese nobles died.

Why is the Battle of Lepanto so important? What did the winner achieve with it? How did the Ottomans respond afterward? The defeat of the Ottomans in Lepanto was of great importance because the Holy League prevented the possibility of Rome being captured and stopped the Ottoman advance into Europe. Also, the Ottoman control of the Mediterranean was disrupted, though only temporarily. Last but not least, the Battle of Lepanto destroyed the Turk's aura of invincibility, which had prevailed in Europe since the 15th century.

However, specialists of the era agree on the fact that while Lepanto was an outstanding event, it led nowhere in the end. The allied forces dissolved and Pope Pius V died in 1572. Venice accepted a new treaty with the Ottomans in 1573, agreeing to hand over the fortresses captured in Albania and Bosnia, surrendering Cyprus to the Turks and increasing the tribute paid for the island of Zante. They agreed to return all Ottoman prisoners, confine their fleet and pay war compensation. Spain was almost bankrupt, and could not prevent the Ottomans from capturing Tunis in 1574. Therefore, the Spanish expansion to North African territories was repulsed. Thus, it seems difficult to say the battle had a long-lasting impact on the Ottoman Empire. Ottomans managed to turn the tables immediately by rebuilding their navy within a very short period of time. Six months after the defeat, the Ottomans returned stronger and set sail to the Mediterranean, where they could not find a navy to respond to them, and thus conquered Tunisia completely. This development can be considered a symbol of the Ottomans reasserting their supremacy in the Mediterranean.

The dialogue between Venetian Ambassador to the Ottoman Empire Marcantonio Barbaro and Grand Vizier Sokullu Mehmed Pasha about the events is remarkable. Sokullu said to the ambassador: “You have come to see how we bear our misfortune. But I would have you know the difference between your loss and ours. In wresting Cyprus from you, we deprived you of an arm; in defeating our fleet (in Lepanto), you have only shaved our beard. An arm, when cut off, cannot grow again; but a shorn beard will grow all the better for the razor.”

The conquest of Cyprus appears far more critical and significant than the Battle of Lepanto. Thus, it would be fair to say that the battle itself did not bear any fruits for either party. Therefore, historians of modern times still need to discuss all the angles of the battle due to the lack of information about its influence over the Mediterranean social, political and economic life.