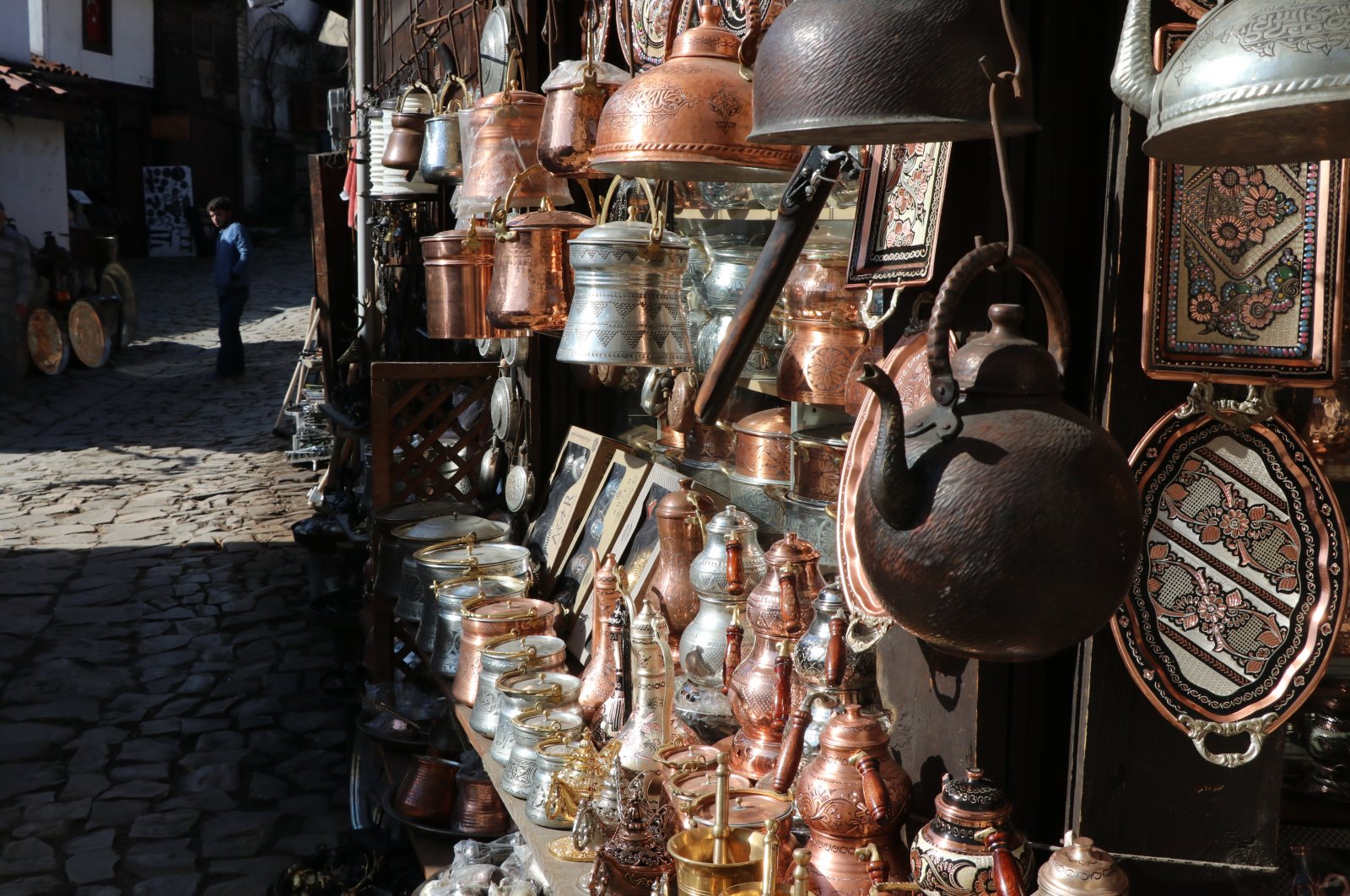 Various metal teapots and pitchers are on display at one of the workshops of the Blacksmiths Market in the Safranbolu district of Karabük, northern Turkey, Feb. 3, 2021. (IHA Photo)
by Ihlas News Agency Feb 04, 2021 12:26 pm
RECOMMENDED

The Blacksmiths Market in the Safranbolu district of northern Turkey's Karabük province has been fading away gradually over the years and today only four masters of the historical blacksmith craft remain at the market. One of the masters is 24-year-old Cihan Ünal, who is proud to keep his family's craft alive for future generations.

Ünal started working as a blacksmith two years ago, taking his father's place in the Blacksmiths Market. “I love this profession and I want to continue,” he told Ihlas News Agency (IHA) and added, “We still carry out this craft in the 225-year-old Blacksmiths Market. We are the last representatives of this traditional craft. There are only four of us left, with no one to carry the torch after us. I am the youngest, the others are all over 50 years old. I am proud to be a young representative.”

The Blacksmiths Market, located on either side of a creek called Akçasu, is the only guild that produces hot and cold metalsmith craft and attracts tourists with its unique and traditional works.

Hüseyin Özdemir, a locksmith at the market, stated that there were Ottoman bazaars like theirs, for every handcraft in Safranbolu. “Blacksmithing is one of them. The other crafts, unfortunately, have lost their originality and have become souvenirs,” he said.

Özdemir pointed out that the metalsmith craft had become extinct and that most of their products were two or sometimes three centuries old. However, they were happy and proud to carry their ancestors' work into the future.

The Blacksmiths Market was constructed in 1796 by Safranbolulu (from Safranbolu) Izzet Mehmet Pasha, the grand vizier during Ottoman Sultan Selim III's (1761-1808) reign. When it was first founded, the market housed 40 blacksmith workshops and by 1924 that number had risen to 105. With the advancement in technology, the handcraft of smiths gradually faded away, shops closed down and now only a few remain.

The market and the historical craft today reflect the culture, traditions and way of life of Turkish society in the 18th and 19th centuries. The few craftspeople that remain provide locks, door handles and metal adornments to the Safranbolu houses, famous for their unique architecture, and they help the town draw visitors despite the global pandemic. They also produce swords, shields, helmets and various other materials for films and TV series that are set in the Ottoman Empire period, such as “Diriliş Ertuğrul,” which have become popular around the world in recent times.