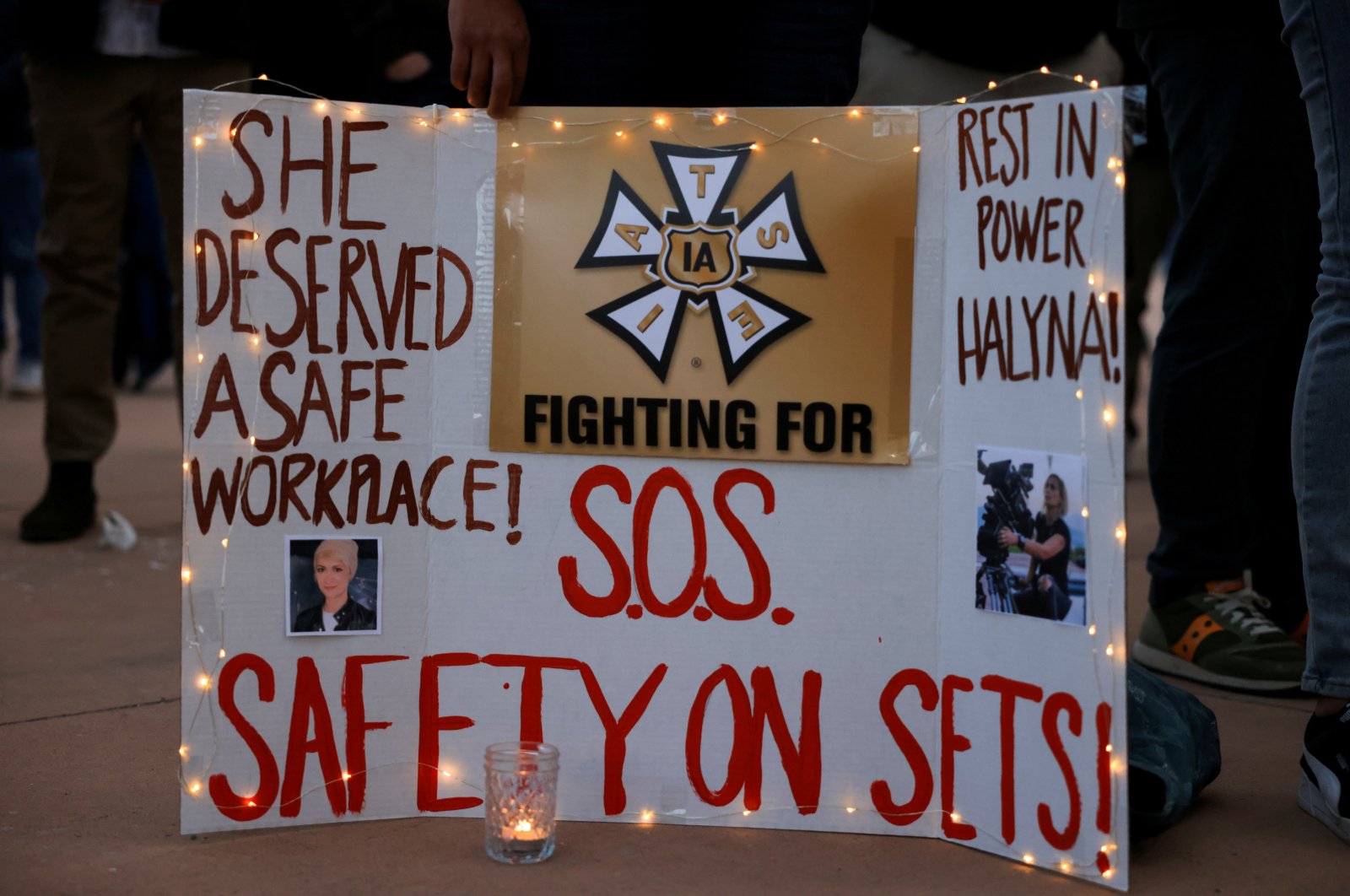 A woman displays a sign calling for workplace safety at a vigil for cinematographer Halyna Hutchins, who died after being accidentally shot by Alec Baldwin on the set of the film "Rust," in Albuquerque, New Mexico, U.S., Oct. 23, 2021. (Reuters Photo)
by French Press Agency - AFP Nov 02, 2021 12:24 pm
RECOMMENDED

The assistant director on the set of the Western film "Rust" who handed actor Alec Baldwin a gun loaded with a live bullet that killed cinematographer Halyna Hutchins and injured the director, broke his silence Monday as he made his first comments since the tragedy, expressing his shock and sadness.

David Halls' role in the accident on the New Mexico set of a 19th-century Western last month has been under scrutiny after he told police he had failed to fully check the firearm before the fatal incident.

In a statement to the New York Post on Monday, Halls said he is "shocked and saddened" by the death of Hutchins but did not directly address the shooting or his role.

"Halyna Hutchins was not just one of the most talented people I've worked with, but also a friend," wrote Halls.

"It's my hope that this tragedy prompts the industry to reevaluate its values and practices to ensure no one is harmed through the creative process again," he added.

Along with armorer Hannah Gutierrez-Reed, first assistant director Halls was responsible for handling and checking weapons on set, and announcing "cold gun" – industry lingo for an inert firearm.

According to a search warrant, he told detectives he "should have checked" that all the rounds in the Colt .45 gun were dummy, or inert, rounds, "but didn't."

A live round fired by Baldwin during rehearsal passed through Halyna Hutchins' body and struck director Joel Souza in the shoulder. Hutchins later died of her injury.

Nearly 100,000 people have since signed a petition to permanently remove firearms from sets, noting that effects such as the loud bang and muzzle flash can easily be added to fake rubber guns in post-production.

In his statement, Halls also said he had been "overwhelmed by the love and support," and wrote, "My thoughts are with all who knew and loved Halyna."

Halls' lawyer did not immediately respond to Agence France-Presse (AFP) requests for comment.

His statement came two days after Baldwin's own first public comments on the incident, in which he told reporters that the tragedy was a "one in a trillion episode."

The American actor said he had been advised not to speak directly about the shooting due to the ongoing police investigation.

Prosecutors have refused to rule out criminal charges over the deadly shooting.

Santa Fe County Sheriff Adan Mendoza said live rounds "shouldn't have been" present, and said it appeared "there was some complacency on this set."

His comments were reinforced by an NBC report that a member of the "Rust" camera crew resigned the day before the shooting, citing significant safety concerns surrounding firearms and explosives on set.

Camera assistant Lane Luper said in his resignation email to producers that safety procedures for filming gunfights were "fast and loose."

"So far there have been 2 accidental weapons discharges and 1 accidental SFX explosives that have gone off around the crew between takes," Luper wrote in the email, according to NBC. "To be clear there are NO safety meetings these days."