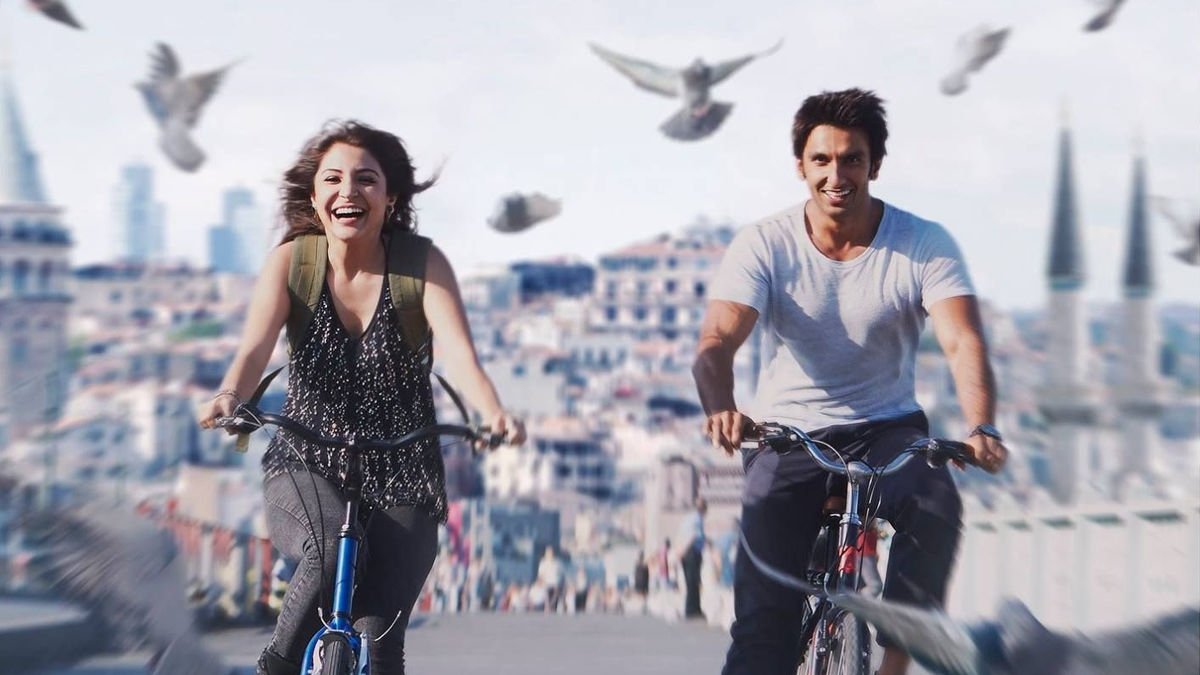 A still shot from “Dil Dhadakne Do” (“Let the Heart Beat”) shows actress Anushka Sharma and actor Ranveer Singh with a view of Istanbul in the background.
by Ambreen Yousuf Jun 22, 2021 12:20 pm

From the very first movie screening of the Lumiere brothers in Paris to the diverse mix of commercial and art-house movies of the last century, cinema has always played a prominent role in connecting peoples and nations. Indian cinema is one of the national film industries that has enjoyed immense fame around the world and continues to attract huge audiences.

India has diverse regional cinemas in different languages such as Telugu, Punjabi, Bhojpuri, Bengali, Marathi and Kannada. However, the Hindi cinema based in Mumbai, popularly known as Bollywood (a portmanteau of Bombay – the former name of Mumbai – and Hollywood), is the most popular. While Bollywood has been a source of employment for local and international artists, it has become a global enterprise working as a medium of cross-cultural communication.

Hindi movies have become a kind of soft power for the country, gaining widespread popularity in Europe, North America, the Middle East, Southern Asia and Africa. Be it a family drama, sci-fi, historical/periodic drama or romance, movies often leave a lasting impression on viewers and also help in transmitting traditional and cultural awareness from one country to another. Bollywood's movies have played an important role in constructing a cultural identity for many people who are living outside India as part of the Indian diaspora.

Bollywood was initially comprised of musical romance films, but underworld crime films were also shot in later periods. After the word Bollywood was coined in the 1970s, its conventions were also defined, turning the industry into one producing "masala" films combining genres like action, comedy, romance, drama, melodrama and musical.

The classical Bollywood movies were shot at scenic spots within the country such as Kashmir, Himachal, Mumbai, Chennai and Hyderabad. But over time, directors and producers started to prefer foreign destinations to attract international audiences. Thus, Bollywood movies unified world cultures by featuring many local and international destinations such as Europe, Spain, London, Australia, the U.S., New Zealand, Dubai and Turkey.

It is no surprise that Turkey is a favorite location for Indian filmmakers to shoot their movies. The country’s rich traditions, combined with diverse European elements and natural scenic beauty, fascinate Indian filmmakers. The country's ethnographic, archaeological, historical and visual values provide poetic impressions in their movies while the metropolis of Istanbul gives a sense of timelessness with its architecture. For example, the Hagia Sophia Grand Mosque, the cultural gem of Turkey, the beautiful Bosporus strait and the Grand Bazaar, one of the largest markets in the world, are all favorite locations for directors to film their artistic compositions.

According to a 2007 study, Bollywood produces around 400 films every year and remains the largest film industry in India. In most of these movies, Turkey’s exotic locations attracted filmmakers. Among some big-budget movies with high ratings shot in Turkey are “Race 2,” “Game,” “Guru,” “Dil Dhadakne Do” (“Let the Heart Beat”), “Baby,” “Ek tha Tiger” (“Once There was a Tiger”) and “Mission Istanbul: Darr ke Aagey Jeet Hai.”

The movie “Ek Tha Tiger,” starring actors Salman Khan and Katrina Kaif, was shot at different locations such the Maiden’s Tower in Istanbul, Zinciriye Mahrasah in the ancient city of Mardin in southeastern Turkey and Mardan Palace Hotel in Turkey's Mediterranean resort town of Antalya.

Along with the natural and historical value making it a perfect location for films, Turkey also keenly supports film tourism via a number of incentives in costs, infrastructure and logistical facilities for foreign filmmakers. As a result of these efforts, the Turkish government has been attracting international filmmakers to the country, especially Indian filmmakers.

It was also announced last year that Indian international actor Aamir Khan's newest production "Laal Singh Chaddha” would be filmed in Turkey. The production of “Laal Singh Chaddha,” an adaption of the 1994 classic film "Forrest Gump,” was halted because of the coronavirus outbreak in India. After Khan’s visit to Turkey, it was also declared that the movie would be shot in Mount Demirkazık in Niğde, Adana and Istanbul.

Another new Indian production shot in Turkey is “Durga,” directed by famous Indian director Ribhu Dasgupta and produced by the esteemed Vivek Agrawal. The action movie was shot in southeastern Gaziantep and Mardin provinces along with Cappadocia, one of the country’s top tourist destinations.