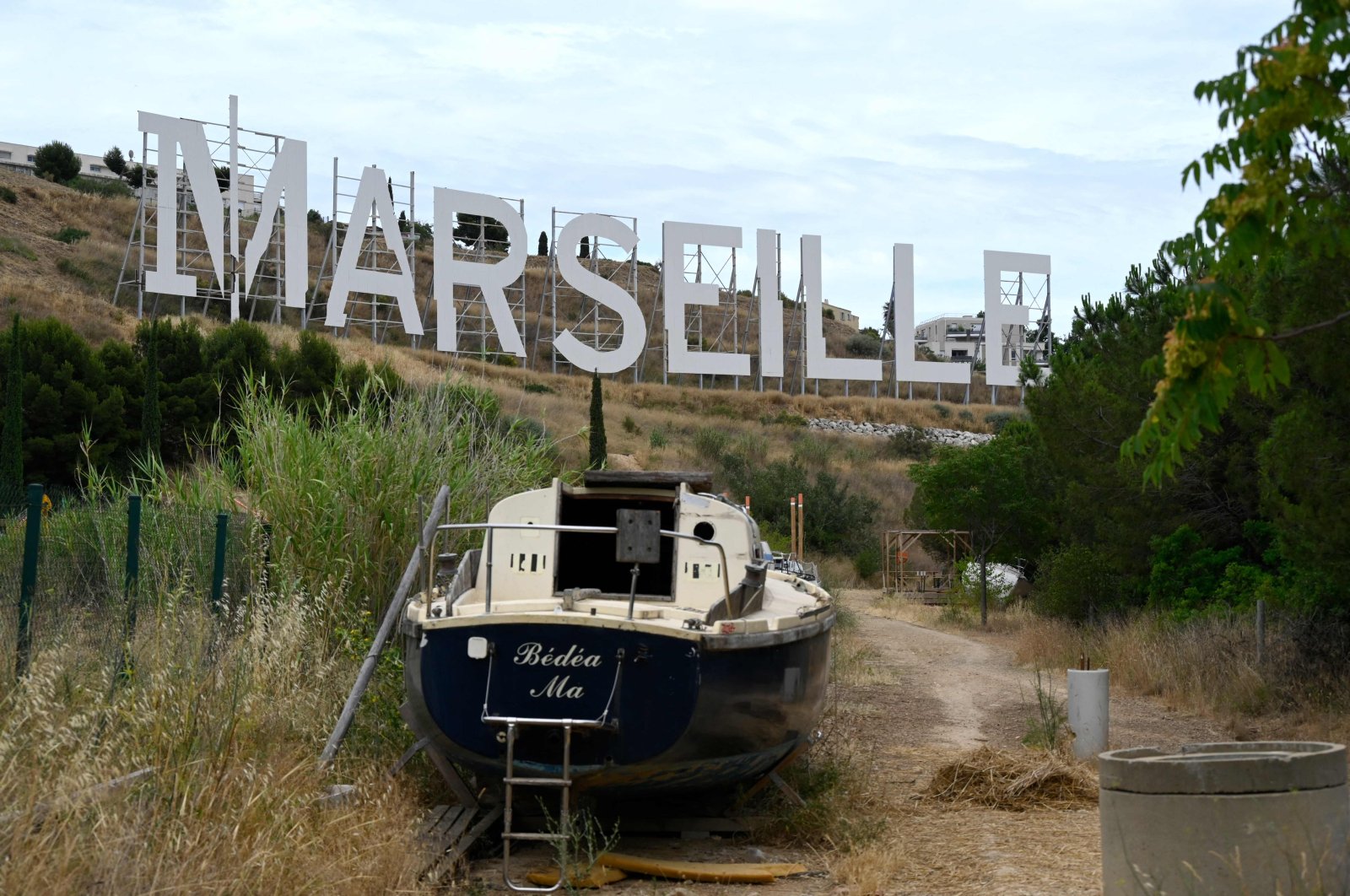 A giant sign similar to the one in Hollywood was installed by Netflix while the firm shoots the famous TV show "Marseille," in Marseille, southern France, July 7, 2021. (AFP Photo)
by French Press Agency - AFP Jul 08, 2021 7:19 pm

Captivating renowned Hollywood directors like Alfred Hitchcock and Steven Spielberg for years, the French city's unique glamour is the setting for three films at this year's Cannes Film Festival

Starting in the 1970s with "The French Connection" thrillers, France's Marseille has gained legendary status for American productions, with Netflix and big Hollywood names like Matt Damon recently hitting its streets to film.

Lately, the narrow alleys leading down to its Old Port have been thick with film crews. Alongside the Netflix series "Marseille," which played up the city's reputation for corruption and criminality with Gerard Depardieu as its crooked but charismatic mayor, a crop of gritty films by young French directors have also thrown it back into the spotlight.

New York on the Med

"Stillwater," which premieres at Cannes on Thursday, has Matt Damon as a fish-out-of-water American oil-rig worker trying to get his daughter out of jail for a murder she claims she did not commit.

The film was made by Tom McCarthy, who made the Oscar-winning "Spotlight" and introduced "Game of Thrones" star Peter Dinklage to the world with "Station Agent." It is no surprise that he should light upon Marseille, said William Benedetto, who runs the city's mythic Alhambra cinema. "Marseille is the most American city in Europe. Its port, like New York's, has been the springboard for so many stories," he told Agence France-Presse (AFP).

Like the Big Apple, Marseille is also a multicultural Babel, a city of immigrants with a big personality whose heroes and villains walk the tightrope of legality. Netflix snapped up another Marseille-set film, "BAC Nord," before it even premiered at Cannes, precisely because it has the hard-boiled quality of an early Martin Scorsese film. It draws on a real-life corruption scandal in the city's tough northern suburbs where detectives were accused of stealing from the drug dealers they were supposed to be locking up. Also penetrating these tower blocks is "A Good Mother" by acclaimed French actor-director Hafsia Herzi, which is also opening at Cannes. As a native of the city, Herzi had the credentials to film there but still had to negotiate with the locals before shooting.

Many legendary directors have been drawn to Marseille, including Alfred Hitchcock ("Rich and Strange"), Steven Spielberg ("Catch Me If You Can"), and Alexander Korda, who made a trilogy of films about the city. And the number of films and series shot there has tripled in the last decade, according to local officials. That's great for the economy but perhaps risky for its reputation, since many play on its stereotype as the violent and dangerous "Kalashnikov City."

"Marseille is a city that resists, that fights, that revolts, that doesn't take anything lying down, and that borderline side of it can sometimes end up as a caricature like in 'BAC Nord,'" said writer Vincent Thabourey. But the cliches have also given France's former colonial port a global profile, he added.

That will get another boost from the hotly tipped "Stillwater." Damon said he drew on his own emotions as a father of girls to channel the anger and frustration of a lost Oklahoma redneck abroad. The character "runs into all the issues you have when you have the language and cultural impediment that an Oklahoma roughneck would have abroad," Damon said in a recent interview. The actor, of course, has history in Marseille since it was a fisherman from the city that pulled an unconscious Jason Bourne from the Mediterranean at the start of the blockbuster franchise.

Trying to do justice to a "city as complex as Marseille is a real challenge for directors," said Thabourey, which is "why they probably /keep coming back."