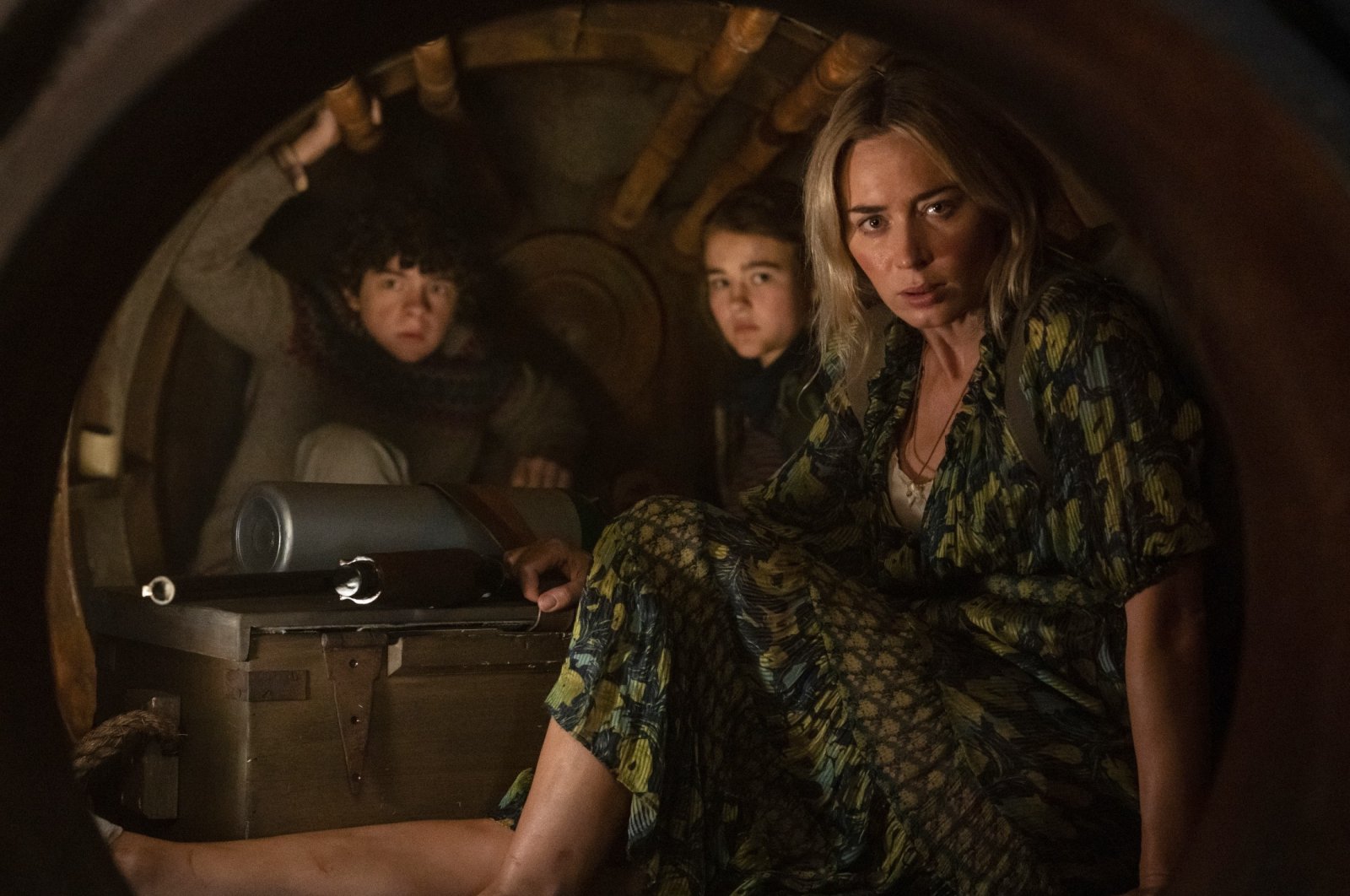 Actors Noah Jupe (L), Millicent Simmonds and Emily Blunt (R) can be seen in a scene from "A Quiet Place Part II." (Paramount Pictures via AP)
by Associated Press May 26, 2021 6:00 pm
RECOMMENDED

Hollywood appears to finally be back, as big releases once again debut exclusively on silver screens. It has been a long time since audiences sat down to enjoy a major release in theaters (over a year if you discount Christopher Nolan's "Tenet") as titles premiered on streaming platforms due to the global COVID-19 pandemic, but John Krasinski's "A Quiet Place Part II" is looking to break the trend and bring back the spectacle.

Krasinski screened the film for his in-laws in London, and the experience of being back in a theater was unexpectedly moving.

"It's a sanctuary to begin with for me. It's one of my favorite places. Emily and I go on movie dates pretty much every week," Krasinski says, referring to Emily Blunt, his wife. "But going back this time had a lot more weight to it. Seeing my movie up there felt more emotional because of all we've been waiting for."

The wait for "A Quiet Place Part II" has been as long as the pandemic. Last March, its release was imminent just as COVID-19 shut down U.S. theaters. A premiere was held in New York on March 8, 2020. Buzz was strong. Opening-weekend box office was expected to exceed $50 million.

However, one delay followed another as Paramount Pictures and "A Quiet Place Part II" awaited the chance to return to the big screen. While many other films were sold off to streaming services, including Paramount's own "Coming 2 America" and "The Trial of the Chicago 7," holding out for theaters was essential for Krasinski. His movie is predicated not just on science-fiction spectacle but an immersive and chilling sound design.

"For me, it was non-negotiable. We designed this movie to be for theaters, specifically," Krasinski said in a recent interview by Zoom from his home in Brooklyn during a break from shooting the Amazon series "Jack Ryan."

"I said I really wanted to wait for theaters and they supported it from the very beginning. Even more so, I give them so much credit for going with me on being this early."

"A Quiet Place Part II," which opens in theaters Friday, is an intensely realized nightmare that will try, with jolts and jump scares, to awaken moviegoing from its pandemic slumber. As the Memorial Day weekend kickoff to Hollywood's delayed summer season, it will pose a much-watched stress test for the industry's theatrical future. It's a high-pressure position that Krasinski meets with a mixture of pride and anxiety.

"It's definitely thrilling and nerve-wracking and all those things at the same time," he says. "But that's what our movie is."

"A Quiet Place," written and directed by Krasinski, followed the Abbott family (played by Krasinski, Blunt, Millicent Simmonds, Noah Jupe and an infant) in an upstate New York dystopia where creatures with hypersensitive hearing stalk the land, ruthlessly hunting by sound. It was a hit, grossing $340 million globally on a $17 million budget. Pressure for a sequel, naturally, grew.

"I was like, no, just preserve it," Blunt said in an interview last year. "Paramount said we're going to make one, whether we were a part of it or not. I think that was what they wanted. But John just then came up with the most undeniable idea."

Krasinski's idea: Make Simmonds' character the lead. In "Part II," the surviving Abbotts are forced to leave their home and, on barefoot tiptoes, search beyond for any remaining humans, and maybe some sanctuary. The scope and scale of "A Quiet Place" enlarges, while the story remains focused on family.

"If the first one was a love letter to my kids, this one's a letter to my kids about what I hope they are going forward in their lives, which is brave and courageous not only for their own happiness but also to make real change," says Krasinski.

In the first "A Quiet Place," Simmonds' character, Regan, figures out a way to defeat the creatures by using her hearing aid to create feedback intolerable to their ears. In the second film, she grows even bolder with her unique power.

"I knew that she could carry the entire franchise," says Krasinski. "She's one of the most stunning actors I've ever worked with. She's so incredibly talented but also so emotional intelligent."

Before Krasinski had even shared his script with Blunt, he contacted Simmonds by Facetime to tell her she would be the sequel's lead.

"She immediately covered her mouth and was shocked," says Krasinski. "She turned to her mom and then this look came back that was as heroic as her character. She looked at the camera and said, 'I'll do it.'"

Simmonds, the 18-year-old who starred in Todd Haynes' "Wonderstruck, " was surprised by the opportunity but resolved to do her best in a role that simultaneously drew from her own strength and encouraged greater confidence in herself.

"As a person, I'm a little bit more shy. I might fade into the background a little more than Regan," Simmonds says through an interpreter by Zoom. "But playing Regan really helped me because Regan was very confident in herself, and that really affected me. In the first film, she wasn't as confident.

She was highly self-critical and blamed herself for a lot of the things that happened to the family. That's something that I experienced personally. I thought to myself: What if I wasn't deaf? What if I was a quote-unquote 'normal person?'

"But when Regan became this powerhouse in the second film, I realized that she was using what she had – all of her deficits, if you will – as strengths," says Simmonds. That gave me a new perspective on myself. I was able to look at myself and say: I'm not broken. I'm unique. I have something to offer and I can take that and use it as an advantage."

The two "A Quiet Place" films, where sign language is a life-saver, are part of a surge of recent films that authentically and dynamically represent characters with hearing impairment, including last year's "Sound of Metal" and the upcoming "CODA."

Simmonds, who during the pandemic helped create transparent face masks to aid in lip-reading, believes the movie industry is progressing in the right direction – and that people like herself shouldn't be shocked at fronting a summer blockbuster.

"We need to start asking ourselves: Why not me?" says Simmonds.

After "A Quiet Place Part II," Krasinski will pass writing and directing a third installment to Jeff Nichols ("Mud," "Take Shelter"), who Krasinski says just turned in his script. More films beyond that, he grants, are also possible.

Like most upcoming films, "A Quiet Place Part II" will have a shorter, 45-day run in theaters before streaming, on Paramount+. However, in the week before release, Krasinski is traveling nationwide to surprise moviegoers and rekindle some of the communal excitement of going to the movies.

"Finally," he told a crowd in Cleveland, "I'm all dressed up with somewhere to go."