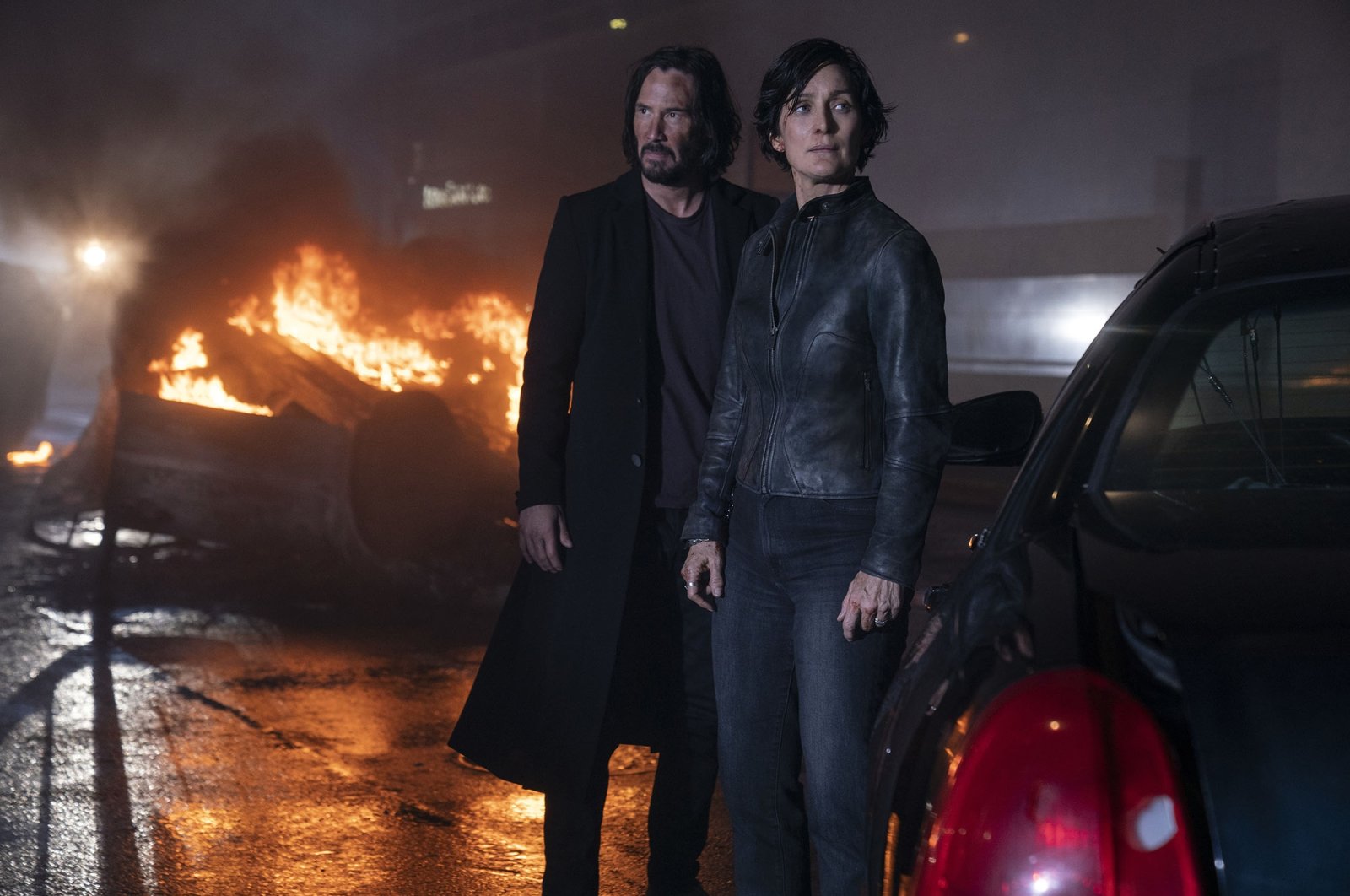 Another pop-culture classic has risen from the dead only for 'The Matrix Resurrections' to butcher the corpse, which reeks of contrived nostalgia and mediocrity. The soulless revival desecrates a genre-defining, groundbreaking, turn-of-the-millennium masterpiece for a quick buck

I had the pleasure of seeing two films in the theater this week, both behemoths of popular culture, both new entries in their mega franchises, both leaning heavily on the greatness of their predecessors but going about it in two diametrically opposed ways. One felt like an homage to the pillars of its previous arcs, borrowing the hits of its older brothers to blend them in a clever way for a story that does not feel like a retread of other spider webs, while the latter felt like it was put together in a matrix of corporate thinking machines and weird self-parodical complexes, a blatant attempt at drawing audiences by baiting them with nostalgia for an era that seems to be long gone, in simple terms: a cash-grab. If you want to read about nostalgia done right, stay tuned for the "Spider-Man: No Way Home" review. Till then, here's "The Matrix Resurrections."

Alright, if you want the short version here it is: It is another mediocre 2021 film. Everything that comes with 2021's Hollywood is packaged here for your mild entertainment. The trends, tropes and cliches of 2021 can all be found, and of course plenty of callbacks and nostalgia – the buzzwords of the entertainment industry in 2021.

Now, let's move on to the long version.

Whose idea was it to resurrect this franchise? Well, who else but Warner Bros. Now, I understand "The Matrix Awakens." So, before we jump in, I feel a little synopsis is due, to better explain the shortcomings of this new "Matrix" flick.

After Neo – portrayed once again by our beloved Keanu Reeves – defeated Agent Smith at the end of "The Matrix Revolutions" and concluded the original trilogy, with peace among machines and humans – for a little while. "Resurrections" picks the story up 60 years later as we find Neo living a seemingly ordinary life under his original identity, Thomas A. Anderson, in San Francisco, in a simulation.

Anderson is famous for creating the "Matrix" video game trilogy, all based on his dreams of the "Matrix." He frequents a coffee shop where he continues to encounter Trinity – now Tiffany, a married mother with Carrie-Anne Moss reprising her role.

Anderson has trouble separating dreams from reality, a condition which is kept in check for the most part by his therapist who consults him – but also provides him blue pills to keep him in the "real" world. Things start to unravel when a group of rebels led by a blue-haired hacker named Bugs played finely by Jessica Henwick and accompanied by a new version of Morpheus played by Yahya Abdul-Mateen II, offer him the red pill and wake him up to reality.

Now, the gang needs to figure out a way to defeat the new "Architect," wake Trinity and save the new Matrix which has become more secure and dangerous in the years since the Agent Smith infection, as they fight a new enemy.

"Word of advice. Agents are bad, but whatever you do stay the hell away from marketing."

That line from "The Matrix Awakens" – a demo showcasing the capabilities of Epic Games' newly developed video game engine Unreal Engine 5 – hits differently after you have seen the film it is promoting.

The first three minutes of the demo features Reeves and Moss speaking philosophically about reality, games and movies alike, with seemingly high-brow concepts being thrown around. Then, there is a three to four-minute action segment that repeats beats on a loop – in true video game fashion – before the demo drops you into the world of the Matrix to roam around, and only roam around, freely. The whole experience is strangely prophetic, managing to foreshadow how the film feels.

"Resurrections" spends a lot of time on the characters rattling off philosophical dialogue, features a bunch of action scenes that churn out the same beats repeatedly and in the end, it leaves you feeling like you have been left in a sandbox to roam aimlessly as the sandcastles of yesteryear crumble beneath your feet and turn into green code.

The film feels shallow and bloated at the same time. So much of it is dedicated philosophical ramblings and exposition pieces, all done ad nauseam, yet you don't leave the theater with questions in your head, like past films, pondering the concepts of existence and reality. You just feel tired.

"Our parent company, Warner Bros., wants a sequel and they're gonna do it with or without us," that is a line not from the demo but from the movie. Smith, who is Anderson's business partner in this simulation, explains that a sequel to the "Matrix" games that Anderson developed has been ordered, and then Anderson's team brainstorms how to revive the franchise.

Now, there is meta humor, there is breaking the fourth wall, and then there is parody. "Resurrections," at times feels absolutely like a parody of itself. The video game aspect feels tacked on and at times exhausted to oblivion, for laughs.

I'll admit, that is a funny line, and at the start, I was laughing along with the film. However, as time passes and the film keeps going on and on about the video game concept, heavily sprinkling jokes about it, you start to feel as though you are being beaten on the head by the overtly subliminal attempt to be meta and self-aware. It started to wear – fast – the whole thing started to feel more and more absurd, more and more like a parody. It was joking so much about the self-awareness, then it became what it was joking about. In the end, I found myself laughing at the film, not with it.

Hey, there's Smith saying "Mr. Anderson." Oh, look, a rabbit tattoo! Is that Morpheus? Well yes, the new one, offering Neo a blue pill in one hand and a red pill in the other. There is the fight scene, with Smith punching and crushing a pillar, and Neo stopping bullets, then stopping some more bullets, before he stops some bullets, and then wait, something different maybe, no, it's Neo, stopping bullets.

I am having deja vu.

I may sound bitter because I am bitter. Entire sections of past films are recreated in this one, and not because they serve any thematic, plot-related, character-related purpose. They are tactics solely deployed to heave at the nostalgia strings in the hearts of audiences. It feels like a work of fan fiction, filled with fan service.

It is the epitome of a Hollywood remake, a once-mighty, intellectual work of modern art ripped of its originality for a quick buck.

As bad as the latter two films of the original trilogy were, they at least attempted new things visually and philosophically. The new "philosophical" aspects of "Resurrections" feel like a retread of past ideas. The visual aspect, well, the Matrix is not green, so there is a difference.

However – other than swapping the color palette out for a more modern one – I would argue that visually it is actually worse than any other previous Matrix films. Particularly, the action. I mean, what happened?

"(The marketing people) said they were fine with your philosophical mumbo-jumbo, but they needed some sexy action," Moss says in the "Awakens" demo. Well, the action in "Resurrections" was not sexy, I can assure you.

"The Matrix," was a visually stunning, revolutionary action film. It was utterly unique, imaginative and groundbreaking. The whole trilogy was synonymous with exquisite action scenes that were pristinely choreographed and beautifully shot. The camera would linger for just enough time so that you could bask in the clean, smooth action.

In the action department, "Resurrections" is uninspired at best. It has been packed with the same 2020s action sequences you will see in every other action film these past and next couple of years. The martial arts scenes in particular lack any kind of excitement, flow or eye candy. I mean, even "Free Guy" had more visually creative action scenes and ideas than "Resurrections," take that as the damning conclusion that it is.

It is such a disappointment – ironic in a way – to see the king of action films fall to such mediocrity, from defining the genre to becoming generic.

Here's to hoping for brighter tomorrows in the matrix and less glitchy resurrections.