Solo show by Dilek Yalçın: A quest to ‘Innocence of Objects’ 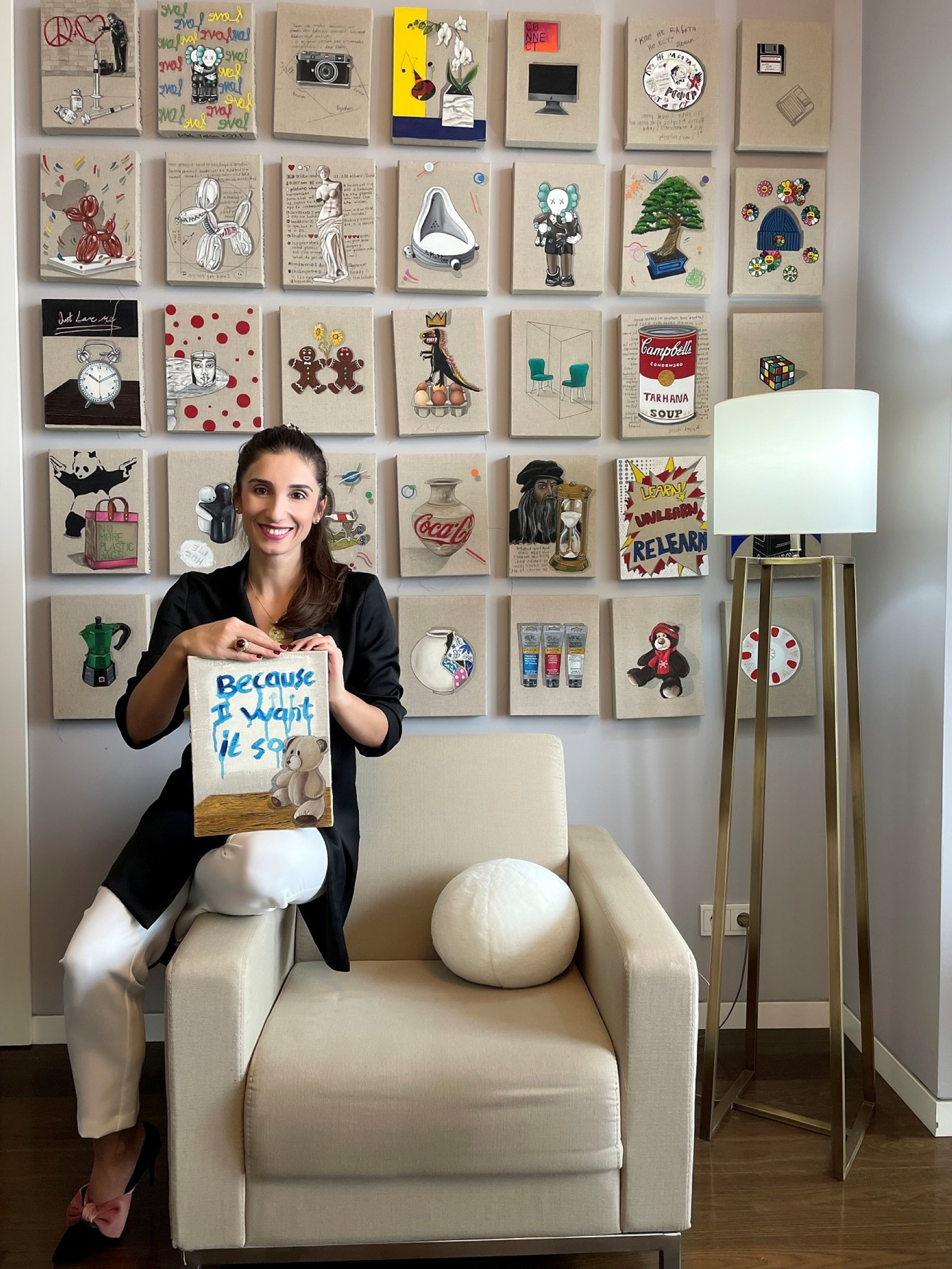 Dilek Yalçın poses with some of her paintings from “Innocence of Objects."
by İREM YAŞAR Nov 19, 2021 1:54 pm
RECOMMENDED

The first time I got a chance to see the works of contemporary artist Dilek Yalçın was at the events Artweeks@Akaretler and Step Istanbul, both of which were held in Istanbul in November last year. While contemplating on relatable scenes of familiar artworks by various artists such as Ramazan Can, Ekin Su Koç and Mehmet Sinan Kuran at the events, I was suddenly mesmerized by Yalçın’s images inspired by the art world with gouache on linen. While one artwork by the artist reflected the taped banana of Art Basel 2019, another combined Jeff Koon’s iconic balloon dogs with Leonardo da Vinci’s “The Vitruvian Man” drawing, depicting the artist’s concept of the ideal human body proportions accompanied by the notes based on Roman architect Marcus Vitruvius Pollio’s work.

When I learned that the artist had opened her first solo exhibition in Istanbul’s Tophane-i Amire Culture and Art Center, the feeling of fascination returned and I couldn't wait to examine the rest of Yalçın’s work. The artist's newest show, “Innocence of Objects,” consists of paintings, installations and sculptures she produced during the pandemic and reflects the concept of innocence.

The first thing that comes to mind when we think of innocent objects is toys due to the purity of children and childhood. In his essay on toys and their cultural meanings, French theorist Roland Barthes says that toys literally prefigure the world of adult functions because the child is a smaller man in the eyes of the public. Therefore, he discusses the way in which toys are made to reflect the adult world, conditioning children to become accustomed to their expected roles and responsibilities as adults.

As Feride Çelik, the curator of “Innocence of Objects,” stated that the small representation of the real world created with toys in childhood turns into a fantasy world created from other objects in adulthood. These objects can be things we collect and include in our collections, small or big, or reflect our memories and experiences.

In “Innocence of Objects,” Yalçın presents this fantasy world of her own. The artist describes her works in the exhibition as “an umbrella that gathers everything I have visited, known, read, learned and questioned, and a playground that I exhibit with my own rules.” Speaking to Daily Sabah, the artist said that her biggest source of inspiration is her inner self. “I listen to my heart a lot in all areas of life, I believe in what inspires it. When it comes to art, when starting to create a work or when I have to make a decision, I isolate myself a little and see how I feel.”

Art is a mystical journey, according to the artist, and “your insights and visions make you and your art unique and special.” This is why she always turns to herself in her artistic journey. In “Innocence of Objects,” she wants to reveal her ideas and thoughts while presenting a reflection of the outside world.

Making new connections with her home, belongings and past during the pandemic-induced lockdowns, the artist provided insight into the preparation of the works that took place in her exhibit. In such a challenging period, she started to paint old notebooks, notes and objects she found in drawers while arranging them. Then, she began working on everyday and biographical items. Over time, she tried to take the pulse of popular culture with iconic objects which left their mark on history along with their creators. After some focus on popular culture, she also naturally began dealing with social and universal themes such as ecology, globalization, digitalism, asylum and women's studies by creating installations fictionalized with surreal realism.

Therefore, the exhibition of Yalçın, designed like a playground, sometimes displays innocent toys that make us smile and quotes from works of art influenced by art history while appearing as a representation zone that talks about the problems of the real world in the other. “I Want It So,” for example, evokes our childhood memories, depicting a teddy bear sitting in front of a wall featuring the writing of “Because I want it so.” Didn’t we all say this while begging our parents to get us a certain toy?

Another work by the artist titled “Fly Me to the Moon” is an embodiment of art inspired by art. While the title of the work reminds us of the famous and much-loved song by Frank Sinatra, the painting itself is an interpreted version of the red balloon dog by Koon. Saluting the world of art with various references, the work takes us on a journey to our youth once again.

Acting with a sense of social responsibility, the artist created the "Painted Bird" installation inspired by Jerzy Kosinsky's eponymous novel. While this work can be read as an implication to the ecology at the very first look, it bears a much deeper meaning as it takes inspiration from a novel describing World War II through the eyes of a boy.

“Innocence of Objects” can be visited until Nov. 30 free of charge. How about we explore social and universal themes among innocent objects that are sometimes inspired by the art scene in Yalçın’s playground?