Not this, not that: Ramazan Can at Anna Laudel Gallery 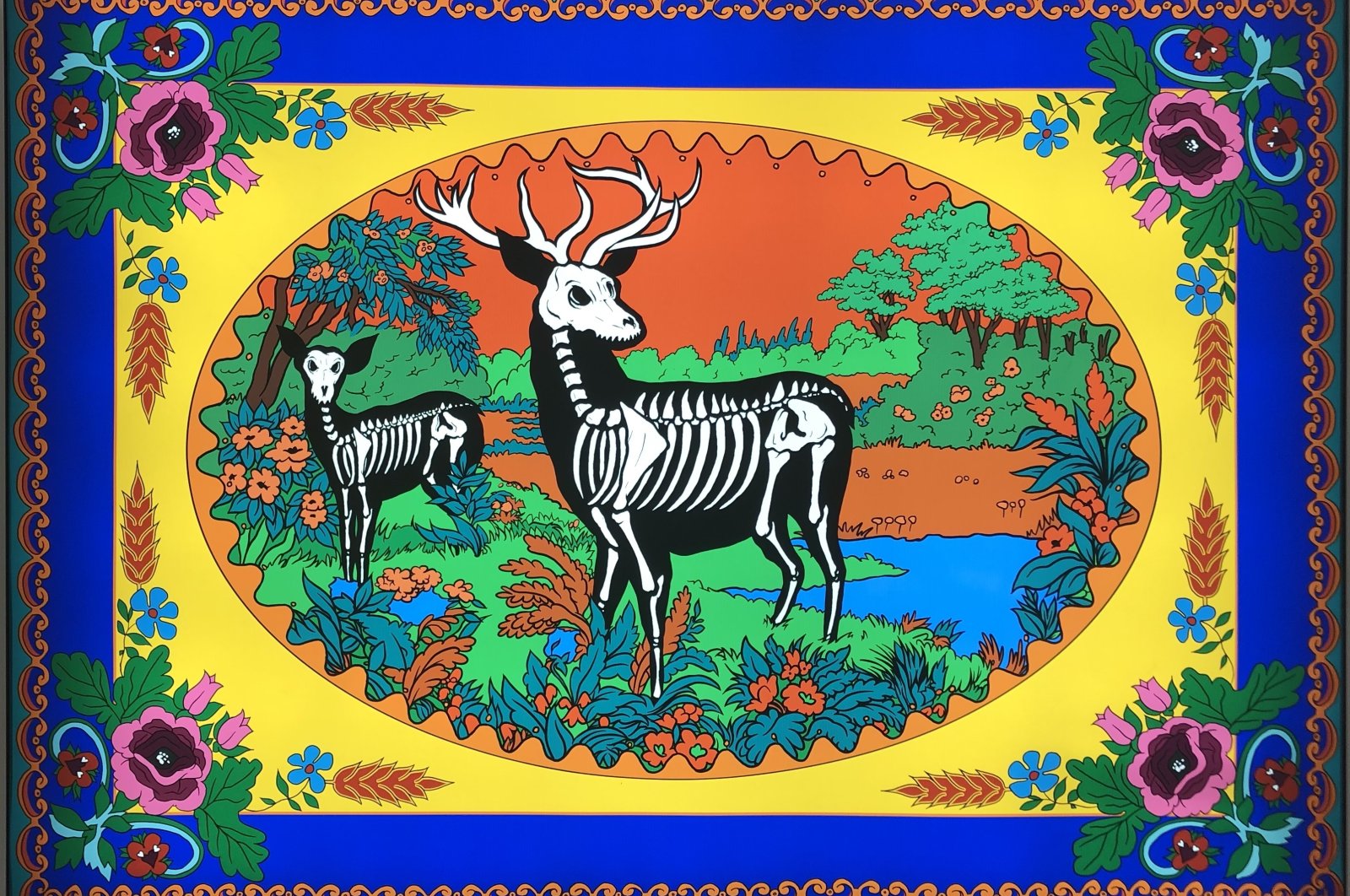 For his latest solo show at Anna Laudel Gallery in Istanbul, the multimedia artist Ramazan Can has explored natural elements with the sensibility of a medieval Anatolian time-traveler in the modern Turkish megalopolis

In Sanskrit, the liturgical language of the ancient Hindu civilization, there is a saying that might be mistaken for an expression of nihilism but is in fact a conceptual affirmation of life in all of its psychologically complex wonders: “Neti, neti,” which translates to “not this, not that.” It can be understood as a form of mental yoga, which, by continually negating every imaginable definition of reality, its parts and its whole, the seer comes to an enlightened state of meditation, touching the ground of being while gazing upward, one with the endless azure.

The solo exhibition, “I am Neither on the Earth Nor in the Sky” comprises seven years of work by Ramazan Can, as shown across two floors at Anna Laudel Gallery’s new gallery space close to Istanbul’s Taksim Square. Its underlying theme is reminiscent of the Sufi wisdom phrase, that a human soul is “in this world but not of it.” Can captured and transformed the ideas of settlement and migration with his distinctive visual vocabulary. The curation begins with his ventures reanimating the floor rug called “kilim” with concrete and neon in various manifestations.

There is an old Turkic tradition, going back to the steppe nomads of the Gobi Desert, that says a house is not a home until it is covered with a carpet. There is a mystical beauty to the symbolism of separating the cold earth from the warmth of a home, even if that divide is enacted with a thin layer of felt, also a characteristic of the customary slippers called “terlik” that are offered to guests at the front door of most Turkish residences. There is a special etymology to a Turkish synonym for home, “yuva,” which translates directly to nest.

The running metaphor of Can’s latest exhibition grapples with the harmonious and also dissonant contradictions of earthly habitation as a balance of movement and its opposite, as defined by the occupation and possession of territorial space. Interestingly, back to language, the Turkish word for living somewhere translates to “sitting,” but it can be interchanged with “experiencing." Can juxtaposes the raw materials of homemaking as an apt, visual comment on life in Istanbul, critiquing its daily chorus of ecological metamorphosis, just to be able to sit.

There is another curious habit conventional to Turkish domestic decor in which a carpet or rug is hung against a wall, suspended like the overarching motif of the show “I am Neither on the Earth Nor in the Sky.” Its effect upends the grounding of the functional ornamentation into a figment of pure beatification, an embellishment that might retain a pragmatism by allowing the dust of its surface to air out. In that way, Can created the title piece of his new exhibition in which he’d cut out a carpet to form its letters.

Akin to the sliced carpets of Şakir Gökçebağ, the imagistic thread of Can Sayınlı or the neon-illuminated, historically informed works of Sarkis Zabunyan, the art of Ramazan Can enjoys creative interpretation within the circle of Turkey’s contemporary artists whose works dialogue with aspects of their national cultural heritage. To open “I am Neither on the Earth Nor in the Sky,” the installation-based, sculptural works are shown according to their material affinity about the basement-like white cube of Anna Laudel Gallery.

Can’s work “The Pain of Existence” (2021) is made of a piecemeal pattern of concrete covered neatly with sheets of rug, thinly outlined over its connecting segments like legos affixed together. The cognitive cacophony that it instills parallels the imposition of hard logic onto the flowing, waving landscape of Istanbul’s shorefront urban sprawl that rolls outward from either side of the Bosporus with growth spurts of high-rise architecture. The vast sweep of Anatolian communities that inhabit Istanbul cling to its bare, artificial stone like Can’s rugs.

The geometrically aligned fragmentation of a rectangular rug into construction bricks breaks up its familiar arrangements of floral imagery. Can has redesigned the ubiquitous kilim into a mere image, lifeless and abstract except for its visibility as the semblance of homeliness reduced to a mode of sheer practicality. An adjacent piece titled, “To Feel at Home X” (2021) halves a classic kilim into its neon likeness. The shock is that of displacing home, negating its grounded conviction, like “neti, neti,” but as a contemporary art practice.

As the crow flies

When the contemporary draftsman Yuşa Yalçıntaş changed his rulebook, inverting the boundaries within which he would draw his spectacularly intricate, Escher-like scenes of children in uniform invested in visually-striking games and puzzles, he created a piece called “House Kite” (2021). Its centerpiece is a dwelling that seems to be in the sky, yet the background is optically illusive. Moreover, the front door is itself a kilim and the roof and walls of the house are magically both inside and outside.

“House Kite” emerges from the depths of the collective Turkish subconscious shared with that of Ramazan Can and others. His latest solo exhibition, “I am Neither on the Earth Nor in the Sky” is a nod to the personal truth that a person is more than the social prescriptions of their respective cultural identity, that homes are made out of the thin air of histories in which people moved and settled in repetitive successions, whether according to seasonal or international change.

And the artist rises to the occasion of Western art history to tackle an alternate vision of its legacy, transcending the weight of Turkish issues along the lines of urban construction and changing traditions, to speak to the importance of cultural appropriation and pop culture in the mammoth and pervasive visual art field. It is no secret that art in the West has come to gain a certain unrivaled prestige as a result of the colonial-era acquisition of cultural artifacts. It is a perennial consideration for European and American museologists.

But in the hands of Can, the second floor of Anna Laudel Gallery is filled with his prolific paintings, in which he retraces the portraiture of Leonardo da Vinci, Raphael, Albrecht Dürer and Edouard Manet while envisioning disproportionately drawn people and places through the lens of a gritty Turkish neorealist expressionism. His oil on photograph, “I am the King II” (2021) is an irreverent revision of the famed “Mona Lisa” (1503). Yet, even surrounded by the ghosts of Westernization, his art inevitably comes full circle, back to Turkish subjects, such as in his print on fabric and lightbox, “Tapestry” (2021), evoking a bucolic Anatolian countryside in which the mythical deer of Turkish poetry is x-rayed. Finally, nature itself is inside out.