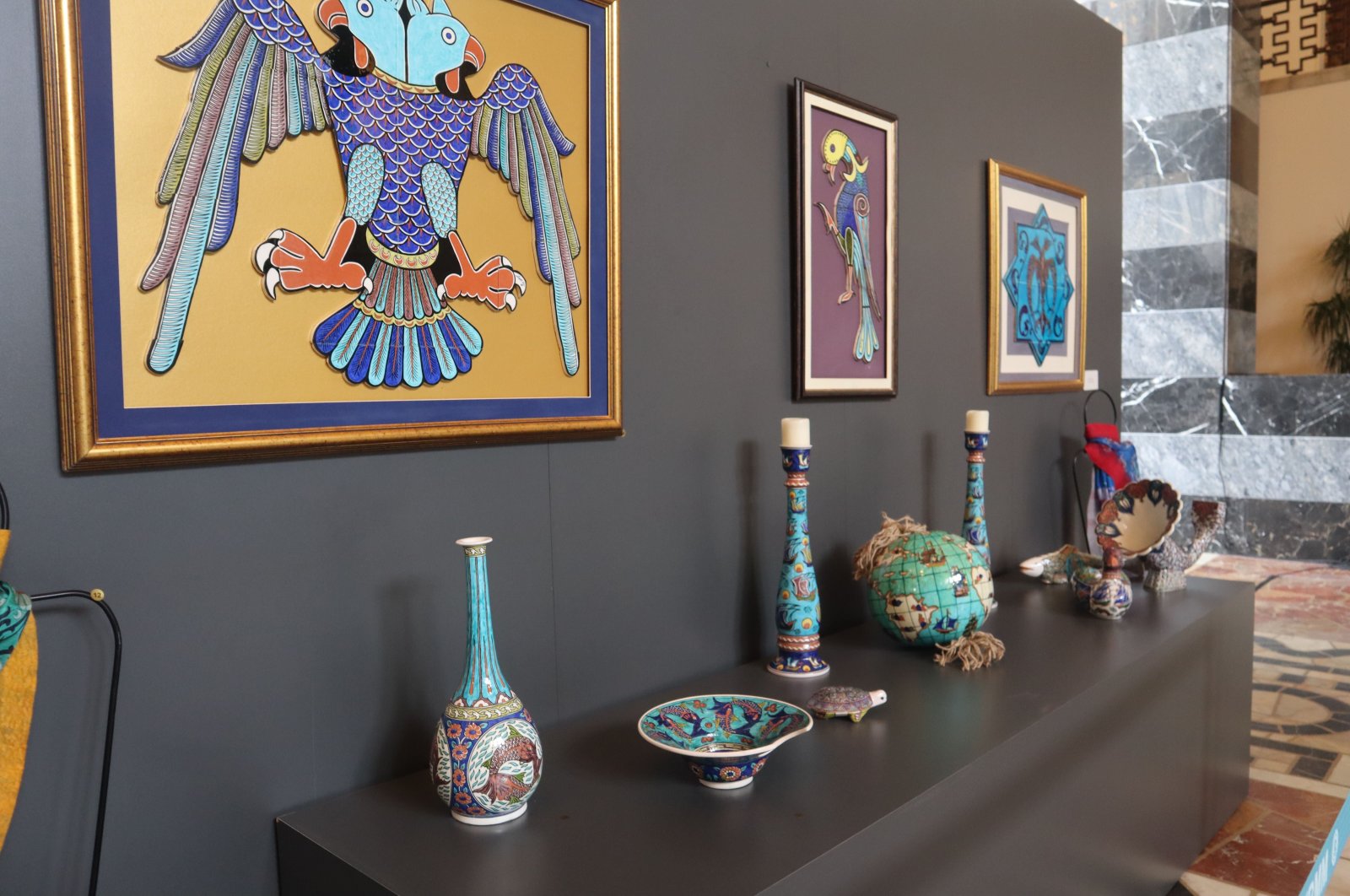 Tile art is a millennia-old craft with strong Turkish roots. The newest exhibition in the Turkish Parliament both appreciates this valuable cultural heritage and honors the memory of tile artist Sıtkı Olçar, thanks to the efforts of the master's daughter

Brought from Central Asia to Anatolia by the Turks and handed down from the Anatolian Seljuks and Ottomans, the Turkish art of tile making still continues to imbue our houses with cultural heritage. Tiles have traditionally been used for the interior and exterior decor of classic architectural structures, mosques, mansions, palaces, fountains, shrines and other landmarks.

The Turks have enjoyed decorating their buildings with ornate tiling, especially during the reign of the Karakhanids (840–1212), who founded the first Muslim Turkish state, and began to decorate the places of worship with tiles. The decorations of Karakhanids show that Turkish tiling has a history spanning over a thousand years. Becoming a tradition during the Seljuk Empire (1037-1194) and the Sultanate of Rum (1075-1308), the tile making also continued in the Ottoman Empire period (1299-1922).

From the 14th century to the end of the 17th century, the main tile production center was Iznik in northwestern Bursa. The types of tiles produced in Iznik changed over time. First red paste tiles, known as Milesian Ware as they were thought to be made in the ancient Greek city of Miletus near today’s southwestern Aydın province, characterized the Iznik tiles and then porcelain-like tiles called blue-white wares were produced. When architectural activities increased in the 16th century in the Ottoman Empire, flat plaque tiles were made and used prolifically.

Another center for tile making was western Kütahya, which met the Ottoman demand for this art after the 17th century. Unlike Iznik tiles, Kütahya tiles are shaped in accordance with public taste, which often incorporated freestyle motifs.

Sıtkı Olçar was one of the leading tile masters who preserved the style of Kütahya tiles. Born in 1948 in Kütahya, the artist was inspired by the soil of his native land and began producing tiles passionately. As a true artist in this field, Olçar inspired tile makers of the time to produce different forms and patterns. However, his ideas were often rejected by other masters who did not want to vary from the set patterns. This prompted Olçar to open his “Ottoman Tile Workshop” with some of his like-minded master friends.

In this workshop, Olçar introduced a fresh take to the art of tiles by benefiting from the diverse culture of the land he lived in. His new forms and patterns added a different dimension and dynamism to Kütahya tiles. He also devoted himself to discovering the secret of producing the bright coral red color, which had been lost for 300 years.

Olçar gained a huge fan base with his work both at home and abroad through a myriad of exhibitions, and important figures like Turkish businessperson Rahmi Koç supported his creations. Important centers of the world art market, including Geneva, Algeria, Madrid, London, Tokyo, Osaka, Volos (Greece), Paris and New York, were among the places where he displayed his art. His works can still be seen both in national and international museums and private collections today.

The master, nicknamed “Picasso of Tile” or “Tile Dervish” for his valuable contribution to this art form, was also declared a Living Human Treasure by UNESCO in 2008. Olçar, unfortunately, passed away in 2010 due to pancreatic cancer.

From master to apprentice

It is believed that apprentices who work with masters to learn their mystery, incomprehensible skill and talent mature after a while and become good artists. In other words, masters hand down their skill and talent to their apprentices. After the passing of Olçar, his daughter and apprentice Nida Olçar took over his workshop and inherited the artist’s cultural heritage. Designing tiles along modern lines, she immortalizes the tiles of Olçar while honoring her loyalty to him and his craft.

While she continues in the footsteps of her father by producing ornate works, Nida also completed some of the work that Olçar had left unfinished. More than 30 years ago, Olçar had opened a business in the Cappadocia region, one of Turkey's top tourist destinations in central Nevşehir province and famous for terra rossa pottery. His dream was to combine tile patterns and artwork produced with terra rossa. However, the master had to return to Kütahya without fulfilling his dream. Nida opened an art gallery in Cappadocia, which drew the attention of local and foreign tourists with its products produced with terra rossa soil from the surrounding mountains and decorated with tile patterns, to realize his father’s dream. In this gallery, she also exhibited her father's works inspired by the frescoes of the Hagia Sophia Grand Mosque. This selection, which Olçar completed with a team of 27 in eight months, was previously exhibited in the garden of Hagia Sophia in 2006 and later in southern Hatay province and the U.S.

Whereas Nida’s efforts to sustain her father's heritage still continue, the Turkish government also supports her to cherish the memory of Olçar and to bring the art of tile to its rightful place. As a fruit of these endeavors, a new exhibition titled “Parliament Private Kütahya Collection Sıtkı” was opened at the Turkish Parliament’s Hall of Honor on March 17 under the auspices of Parliament Speaker Mustafa Şentop.

Speaking at the opening ceremony of the exhibition, Şentop said: "Traditional Turkish tile art is one of our most valuable cultural heritages. Tile art reflects our aesthetic taste and our view of the beauty that our glorious civilization has. It is an important responsibility for us to protect, develop and keep Turkish tile art alive. Nida Olçar, the beloved daughter of late tile master Sıtkı Olçar, followed in the footsteps of her father and carried Turkish tile art to a higher level. It is a very important achievement for our country. We are proud of all of our artists who transfer our tradition and culture to future generations with contemporary forms. With the exhibition we opened today, we will not only ensure that the precious pieces of tile art will be exhibited in our Parliament but also will have the opportunity to celebrate master Sıtkı, whose fame has exceeded the borders of our country."

Stating that Nida Olçar is also one of the artists who strive to keep the legacy of her father alive, Şentop said: "From the age of 5, she was raised in the workshop of master Sıtkı. She has been interpreting the old tradition with a contemporary perspective in her art like her father. I sincerely believe that our tile artist Nida Olçar will keep the Turkish tile art alive by passing on this torch, which she took from her father master Sıtkı, to the next generations." Following the speech, Olçar presented a tile acoustic gramophone to Parliament Speaker Şentop as a gift.

Speaking to Daily Sabah, Nida talked about the preparation period of this exhibition. “We visited Şentop together with Kütahya Deputy Ishak Gazel around nine months ago. During our conversation, he asked whether tile patterns can be applied to various objects and offered to open a show in the Parliament building in the capital Ankara. Then, I, with a team of 20, created the patterns, forms and designs. We worked with six business partners to apply them to various objects. For example, we had printed our patterns on silk, special fabrics, ties and handkerchiefs in Bursa province. Also, the dress and the cushions were sewn with our patterns at the Kütahya Advanced Technical School. We completed our exhibition in nine months.”

Along with Nida and her teams’ works, the exhibition also features marvelous pieces by Olçar as the master who introduced the use of tile art to various products. The show comprises a range of works combining traditional and modern patterns including clothes, jewels, decorative objects as well as paintings.

Noting that they did not imitate master Olçar in the patterns that they produced for the show, Nida said: “We show respect to masters and collectors. Our aim is not to imitate but create our own designs following the footsteps of masters, especially my father. I was raised in the workshop of my father and took the flag of tile art from him. All I want is to transfer this art and heritage of my father to the next generations properly.”

Stating that the exhibition is expected to attract great attention, she continued: “It will also be exhibited in Istanbul after Ankara. Then, we will have an exhibition at the Çanakkale 18 Mart University in June."

The “Parliament Private Kütahya Collection Sıtkı” exhibition will be open for visitors until March 26.