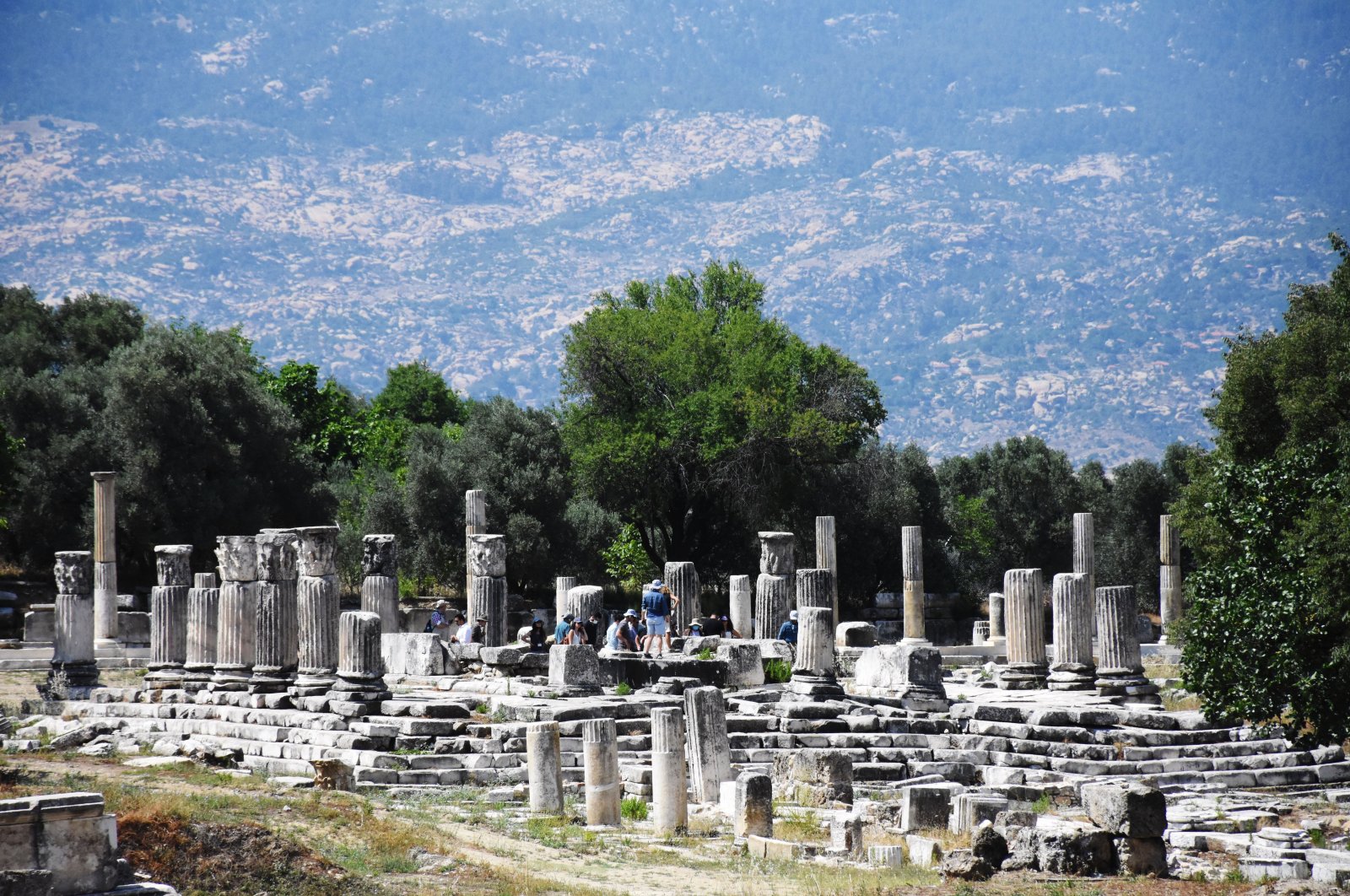 A view from the ancient city of Stratonikeia, Muğla, southwestern Turkey.
by DAILY SABAH Jun 27, 2021 1:55 pm

Supported by Iş Bank, the ongoing excavations will both disclose the mysteries of Turkey’s ancient cities Stratonikeia and Lagina, and draw more visitors to these hidden gems with the rejuvenation of the architectural structures

Anatolia has hosted many civilizations throughout history and is among the richest regions in the world in terms of archeology. The ancient cities of Stratonikeia and Lagina, located in the Yatağan district of southwestern Muğla province, draw attention as rare places in Turkey that bear the traces of different civilizations. The ongoing excavation works in the cities both reveal their history and also draw more visitors to them with rejuvenated architecture. Let’s explore Stratonikeia and Lagina through a comprehensive guide to their past.

Stratonikeia, which was one of the most important centers of the ancient Caria region, has been one of the places frequently visited by many local and foreign travelers and researchers since the 17th century. The first scientific excavations in the ancient city were launched in 1977 by a team headed by professor Yusuf Boysal and lasted until 1999. Then, professor M. Çetin Şahin took over the excavations between 2003 and 2006. Since 2008, excavation, research and restoration works have been carried out by a team headed by professor Bilal Söğüt on behalf of the Ministry of Culture and Tourism and Pamukkale University.

Recently, Turkey’s Iş Bank supports the excavations of Stratonikeia, which combines the structure and urban texture of the Ottoman and Republican periods, as well as the ancient period. The bank contributes to the devoted work of scientists and long-term projects on the Anatolian civilization through scientific research to bring the rich archaeological assets of Turkey to light, protect them and add them to the world heritage while strengthening Turkish society’s awareness of history and archeology. Iş Bank has supported scientific studies in the archaeological sites of Patara, Zeugma, Teos, Nysa and Kaman/Kalehöyük in Turkey to date.

The area called Temple 2, located at the junction of the north and west streets in the city center, has been excavated with the support of Iş Bank. In this study, artifacts like inscription mosaics and zoning arrangements from the Augustan Period to the fourth century A.D. were unearthed in a building. The quality of the column heads and decorations found here indicate that there was a very important building here in ancient times. With the completion of the excavations, what this structure was and the stages it went through in the following periods are expected to be determined.

The oldest finds in Stratonikeia date back to 3000 B.C.; whereas written sources and finds related to a settlement in the ancient city belong to the end of 2000 B.C. The settlement in this area was known as “Atriya” during the Hittite period.

The walls belonging to the early settlement of Leleges are seen on Kadıkulesi Hill in the south of the city and on the northern slope. According to the information given by the ancient writers Herodotos, Strabo, Pausanias and Stephanos of Byzantium, it is known that there was a settlement here before the Hellenistic period, and Stratonikeia was an important center where Carians gathered. Starting from the second quarter of the third century B.C., the name of this city was changed by the Seleucid king Antiochus I Soter in the name of his stepmother and then his wife Stratonike.

Since the period of Roman Emperor Augustus, a continuous construction draws attention in the ancient city due to the ongoing peace and tranquility in the region. In fact, it is understood that financial support was received from the emperors in the construction of the structures in the Roman period. In the Byzantine period, the Diocese of Stratonikeia was affiliated with Aphrodisias like other cities in the region.

Turkish period settlements have been seen in the city since the Anatolian Beyliks (Principalities) period. The earliest known monumental structures related to this period date back to the A.D. 14th and 15th centuries.

According to evidence uncovered in the excavated structures, it is believed that the city of Stratonikeia was constructed with a grid street plan. Among the unearthed structures of the city are the remains of city walls, a monumental fountain, the city gate, the colonnaded street, a gymnasium, a western street, a latrina (a toilet or an even simpler facility that is used as a toilet within a sanitation system), a bouleuterion (council house), a bath, theater, temple and water structure. In addition, there is a bathhouse from the Principalities Period along with a mosque, a paint workshop, a coffee house, houses and shops from the 18th and 20th centuries.

The city walls, which spread over a wide area from the summits of Kurukümes Hill to the plain in the north, are approximately 3,600 meters long (1,800 feet long). The upper city walls, which date back earlier than the lower city walls, are located further south, on the upper part of the hill.

The north city gate on the northern city wall connects Stratonikeia with Lagina through a sacred road. It is also the gate through which visitors from the Zeus Sanctuary at Panamera also pass. For this reason, it has great importance as an entrance and ceremonial gate. There were two arched entrances on both sides of this monumental building and a fountain with a half-round facade decorated with sculptures between these entrances. They were built after the earthquake in A.D. 139. The northern street, which starts from the square in front of this gate, continues toward the city center.

The 105-meter-long northern side that forms the narrow facade of the gymnasium was excavated by the teams of specialists. There is a semicircular exedra (a semicircular architectural recess or platform) in the middle, and two large rectangular rooms on each side here. The total length of the building is estimated to be 267 meters. According to its size, this building is the largest known gymnasium in the world.

The bouleuterion is a rectangular building situated facing east and west in the city's center. There are semicircular steps also used as seats on the western edge of the building. There are also inscriptions in two languages on its northern wall. While the ones in the exterior part of this wall are in Latin, the ones in the interior part are written in Greek. The Latin inscriptions on the exterior of the building detail the goods sold and services rendered in Stratonikeia during the period of Roman Emperor Diocletian and their highest prices at that time. Among the Greek inscriptions inside the building, the calendar of the Augustan period made by Menippos of Stratonikeia still remains intact and is an important historical document.

The cavea (the seating sections of Roman theaters and amphitheaters) of the 12,000-seat theater, built in the Greco-Roman style with a single diazoma in Stratonikeia, faces north. There have been many changes and renovations in the building, especially during and after the Emperor Augustus period.

The temple excavated in the city is located on an upper terrace to the south of the theater. Experts believe the building and its surroundings were also once part of the theater complex. The temple was built in a peripteral plan, Ionic order and a three-step infrastructure. It is dated to the early imperial period in the city.

Along with many ancient structures, the city also houses a Turkish hammam from the Anatolian Beyliks period and many other constructions from the 18th-20th centuries. All of these well-preserved buildings reveal the atmosphere of their periods.

The ancient city of Stratonikeia is an important settlement on the passageway that provides a connection between the sea and the inner regions of Anatolia. It is known as the place where Carians gathered before the Hellenistic period. The number of structures mentioned in the inscriptions throughout the ruins is much higher than those unearthed so far, which means there is still a valuable treasure waiting to be discovered under the city.

Stratonikeia is one of the rare historical settlements where ancient, Ottoman and Republican structures are intertwined. It is the only city where the ruins of the ancient period can be explored on the stone-paved historical streets of the Ottoman period. In the same city, visitors can also take breaks in the village cafes of the early Republic period located near the great plane trees.

In history of Lagina

The 3,000-year-old site of Lagina is the sacred precinct of the goddess Hekate (Hecate). Ottoman scientists first took interest in the site in the 19th century. Modern excavations and restoration work began in 1993 under the guidance of the Muğla Museum and with an international team advised by professor Ahmet Tırpan from Pamukkale University. Since 2016, the fresh excavations of Lagina have been lead by professor Söğüt, like in Stratonikeia, after Tırpan's team ended their work at the site in 2011.

There is a sanctuary belonging to the goddess Hekate and settlements around this sanctuary in Lagina. Several remaining structures include the entrance gate (propylon), the wall surrounding the sanctuary (peribolos), the covered resting and promenade areas (stoa), the structure where sacrifices and offerings are made to the goddess (altar) and the house of the goddess (temple). In the temple the statue of the goddess can be found as well as small temples called naiskos belonging to other gods, goddesses and emperors, monumental columns, statue bases and houses of priests that once lived in the sanctuary.

Many travelers and researchers have visited Lagina since the 18th century. Among them, Osman Hamdi Bey, one of the first Turkish museologists and a pioneering painter known for his “Kamplumbağa Terbiyecisi” (“The Tortoise Trainer”). He excavated the area between 1891-1892 and took all of the artifacts to the Istanbul Archeology Museum. Lagina is famous for being the site of the first scientific-based archaeological research to have been carried out by a Turkish team.

Lagina is home to the sanctuary of Hekate, the Greek goddess of witchcraft, magic and ghosts, the largest ever built for the goddess. Thanks to this cult sanctuary, Lagina was once the religious center of cities in the region, including Stratonikeia.

The sanctuary is also known as the site of the first scientific archaeological research to have been carried out by an entirely Turkish team.

Regular festivities were held for Hekate every year in Lagina, while grand celebrations were held every four years for the goddess. The festivities were bound by certain rules, and they were regularly held as "Key Carrying" ceremonies. During the key-carrying ceremony, a choir of young girls would sing hymns, leaving Lagina and arriving in Stratonikeia, and would return to the sanctuary to declare their devotion to the city. After this choir entered the sanctuary, religious ceremonies would begin. People who came to the sanctuary would sit on the steps and watching the ceremony.

The fact that it is the only large temple known to have been built in the name of Hekate built in the style of Corinthian order architecture, which was the most expensive style of the ancient period, demonstrates the importance of the temple. The financial support of Emperor Augustus for his sanctuary detailed in the inscription on the propylon reveals that the Lagina Hecate Sanctuary had great importance and power in the region.