Istanbul Music Festival to jazz up city with open-air concerts 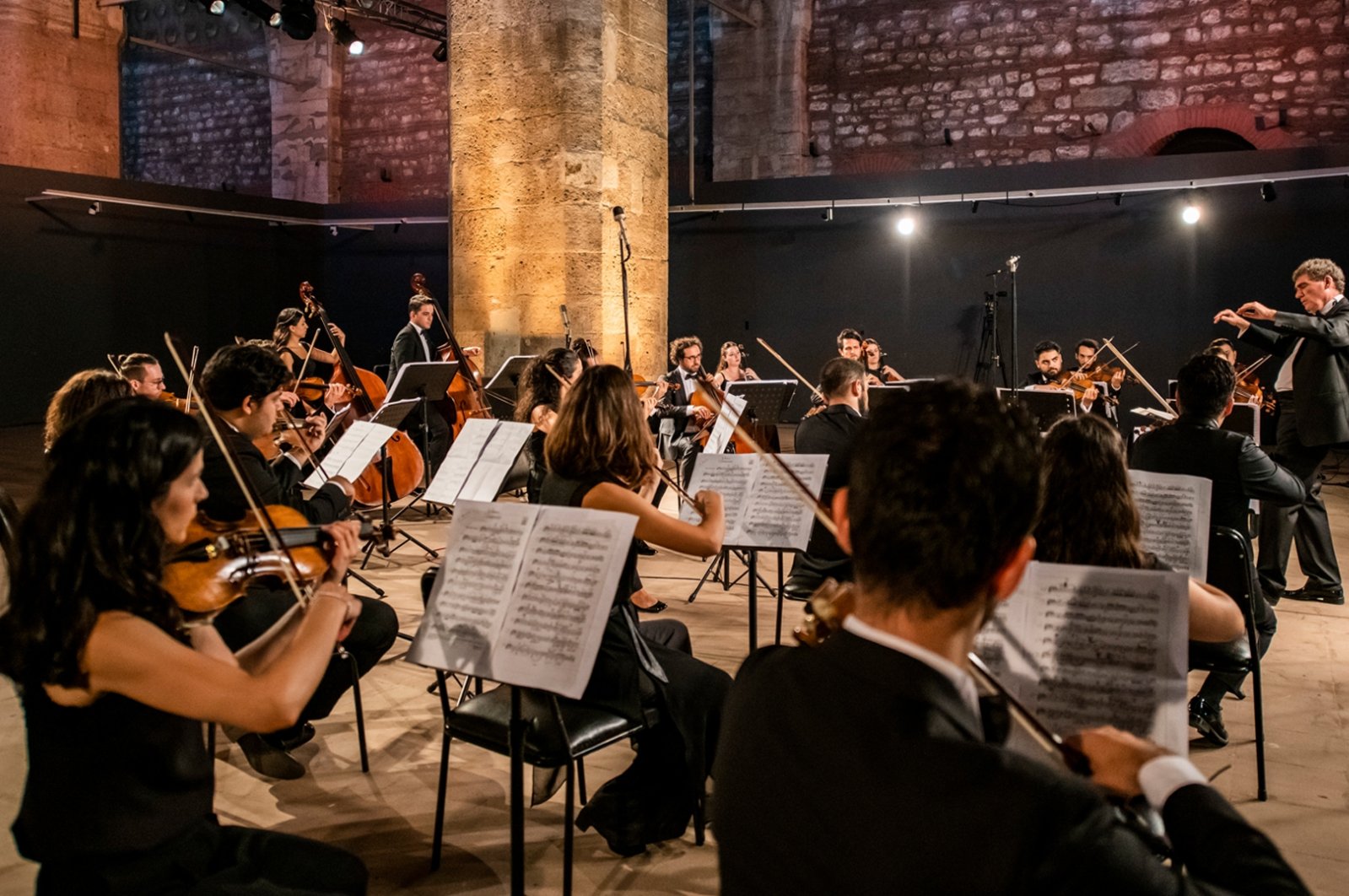 The Festival Orchestra under the direction of Can Okan will accompany pianist İdil Biret at Harbiye Cemil Topuzlu Open Air Theater on Aug. 24. (Courtesy of IKSV)
by DAILY SABAH Jun 16, 2021 12:42 pm

Themed as “Another World Is Possible” to represent the search for a new era that will begin with love, hope and solidarity, the 49th edition of the Istanbul Music Festival is set to entertain Istanbulites with exclusive concerts of world music

Organized by the Istanbul Foundation for Culture and Arts (IKSV) with the support of the Ministry of Culture and Tourism, the 49th Istanbul Music Festival will entertain festival audiences in open-air venues under pandemic measures between Aug. 18 and Sept. 16 this year. The festival will offer music lovers a whole new classical music experience and seek an answer to the question “Is another world possible?” through the language of music.

The 49th edition of the festival will host more than 30 soloists, musical societies and orchestras from Turkey and abroad in 21 concerts to be held in 14 different places in Istanbul. Listeners will enjoy impressive concerts by various ensembles such as the Tekfen Philharmonic Orchestra, the Borusan Istanbul Philharmonic Orchestra (BIPO), Accademia Bizantina, the Festival Orchestra, Modigliani and casalQuartet, as well as many renowned musicians including Fazıl Say, Idil Biret, Khatia Buniatishvili, Anna Vinnitskaya, Alexander Rudin, Hande Küden, Paul Meyer, Simon Ghraichy and Ufuk-Bahar Dört.

Istanbulites are also invited to the free weekend concerts to be held in Atatürk City Forest, Fenerbahçe Park and Yıldız Park as part of the 49th Istanbul Music Festival. At the festival, nature walks, workshops and activities for children and young people will also be held free of charge. Talks with renowned names from different fields before the concerts continue to be organized this year as well. Enthusiasts can also listen to these talks as podcasts on IKSV Spotify and Apple Podcasts accounts.

This year's Honorary Award of the 49th Istanbul Music Festival goes to Cihat Aşkın, the international representative of the Turkish violin school, while the Lifetime Achievement Award will be presented to Latvian composer Peteris Vasks.

Aşkın participated in numerous concerts, festivals, radio and TV broadcasts, conferences and workshops in four continents and 51 countries and shared the products of Turkish and universal music among the world’s leading artists at prestigious classical music halls. Apart from his performing career, as an educationalist, Aşkın founded many education and art institutions in Turkey. The violinist will receive his award at the opening ceremony of the festival.

According to the data provided by IKSV, Vasks was appointed as the Main Composer of the Stockholm New Music Festival in 1996 and was awarded the Herder Prize from the Alfred Toepfer Foundation and the Baltic Assembly Prize. The composer received the Latvian Great Music Award and was a member of the Latvian Academy of Sciences in 1994 and a member of the Royal Swedish Music Academy in Stockholm in 2001. In 2005, he received the Cannes Classical Award for recordings of the violin concerto Distant Light and the 2nd Symphony. In 2016 Vasks received the State Cultural Award of the Republic of Latvia and in 2019 the Honorary Diploma of the Latvian President.

Vasks will receive his award before “A Premiere: Vasks” concert, where his latest work “String Quartet No. 6,” commissioned by the Istanbul Music Festival, will have its Turkey debut on Sept. 6.

The 49th Istanbul Music Festival will kick off with the opening concert of Tekfen Philharmonic Orchestra under the baton of Aziz Shokhakimov at the Harbiye Cemil Topuzlu Open Air Theater on Aug. 18. Pianist Anna Vinnitskaya will accompany the philharmonic orchestra in this special concert.

In addition to the Turkey premiere of Vasks' latest work, the festival will also host the world premieres of four works. The festival will host a unique concert to celebrate the 100th birthday of Turkish composer Ilhan Usmanbaş, who dedicated his whole life to music, innovation and brought contemporary features to Turkish music with his innovative attitude in his compositions. Talented members of the Diskant Contemporary Music Ensemble, who work with the best orchestras in Turkey and continue their successful careers as soloists, will perform the composer's works in this concert. While “Octet” composed in 1960 by Usmanbaş will be the standout piece of the concert, the works composed by Usmanbaş’s students Ahmet Altınel, Özkan Manav and Mehmet Nemutlu will have their world premieres.

The Istanbul Music Festival did not forget to commemorate Turkish folk poet Yunus Emre. As UNESCO declared 2021 as the year of Yunus Emre, the festival included the Yellow Flower project in its program. As part of this project, the festival will host another world premiere. The compositions specially prepared for the festival by Şirin Pancaroğlu and Bora Uymaz with the verses of Yunus Emre will be performed for the first time at Four Seasons Hotel Istanbul at the Bosporus on Sept. 13.

Famous Turkish pianist Fazıl Say will also perform an exclusive concert entitled “Voice Nature” as part of the Istanbul Music Festival. The pianist will perform his “Mount Ida” and “Walking Mansion” compositions accompanied by violinist Friedemann Eichhorn, who had collaborated with many musicians including Latvian violinist Gidon Kremer and Russian conductor Yuri Bashmet, and casalQuartett, who received many prestigious awards including The Diapason d'Or.

The festival program also offers an exceptional chamber music concert with world-renowned musicians. The concert will feature cellist, conductor, pianist, harpsichordist, and professor Alexander Rudin, who is one of the leading representatives of the Russian school of music, pianist Iris Şentürker and violinist Efdal Altun. The Istanbul Music Festival Lifetime Achievement Award, which could not be presented to Alexander Rudin last year due to the global pandemic conditions, will also be presented at this concert at Rahmi M. Koç Museum on Aug. 20.

Crowning her musical journey by playing with the most distinguished orchestras of the world, giving nearly 3,000 concerts throughout her career and reaching 3 million music lovers with her recordings, pianist Idil Biret also celebrates her 80th birthday at the Istanbul Music Festival. In this special concert, Biret will perform at Harbiye Cemil Topuzlu Open Air Theater on Aug. 24 with the Festival Orchestra under the direction of Can Okan, who has conducted many symphony orchestras in Sweden after his master's degree in conducting at the Stockholm Royal College of Music. The Festival Orchestra, consisting of the most talented young generation musicians of Turkey, all of whom work in state opera and symphony orchestras, is an ensemble that was founded last year with the belief in the unifying power of music as part of the Istanbul Music Festival. In this concert, listeners will witness an exciting interpretation of Johann Sebastian Bach’s legendary orchestral suites. Afterward, they will listen to Chopin from Biret, who won the rightful praise of critics for her interpretations of the composer.

The festival’s BIPO Focus series will continue with three concerts. In the first concert of the series, Borusan Quartet and fascinating clarinetist Paul Meyer will share the stage at the dreamlike terrace of the SSM on Aug. 25. In the second concert, BIPO will be accompanied by accordionist Martynas Levickis at UNIQ Istanbul Open Air Stage on Sept. 2. And the last concerts of the series will feature star pianist Khatia Buniatishvili along with BIPO this time at Harbiye Cemil Topuzlu Open Air Theater on Sept. 14.

Piano duo Ufuk & Bahar Dördüncü have long made a name for themselves in the world of classical music with their flawless technique, delivering vigorous and evocative performances. The project “La Scene Revoltee,” which they will present as part of the festival, is the fruit of their tireless search for the new. The duo will invite listeners to the dance of music and image in this project at the Saint Benoit French High School Courtyard on Sept. 1.

Simon Ghraichy, who is known as the rockstar of the piano, is an excellent virtuoso in the true sense of the word. Ghraichy will perform a concert at the Palais de France on Sept. 8. Nurtured by the richness of cultural diversity, this concert elevates the vital energy of this year's festival to a new height.

Following Ghraichy, the musical group Accademia Bizantina, who are experts in the practice of baroque music and aesthetics, will give a concert at the historical Palazzo di Venezia on Sept. 16. An extraordinary baroque feast waits for listeners with shining star Sophie Rennert, the mezzo-soprano of the group.