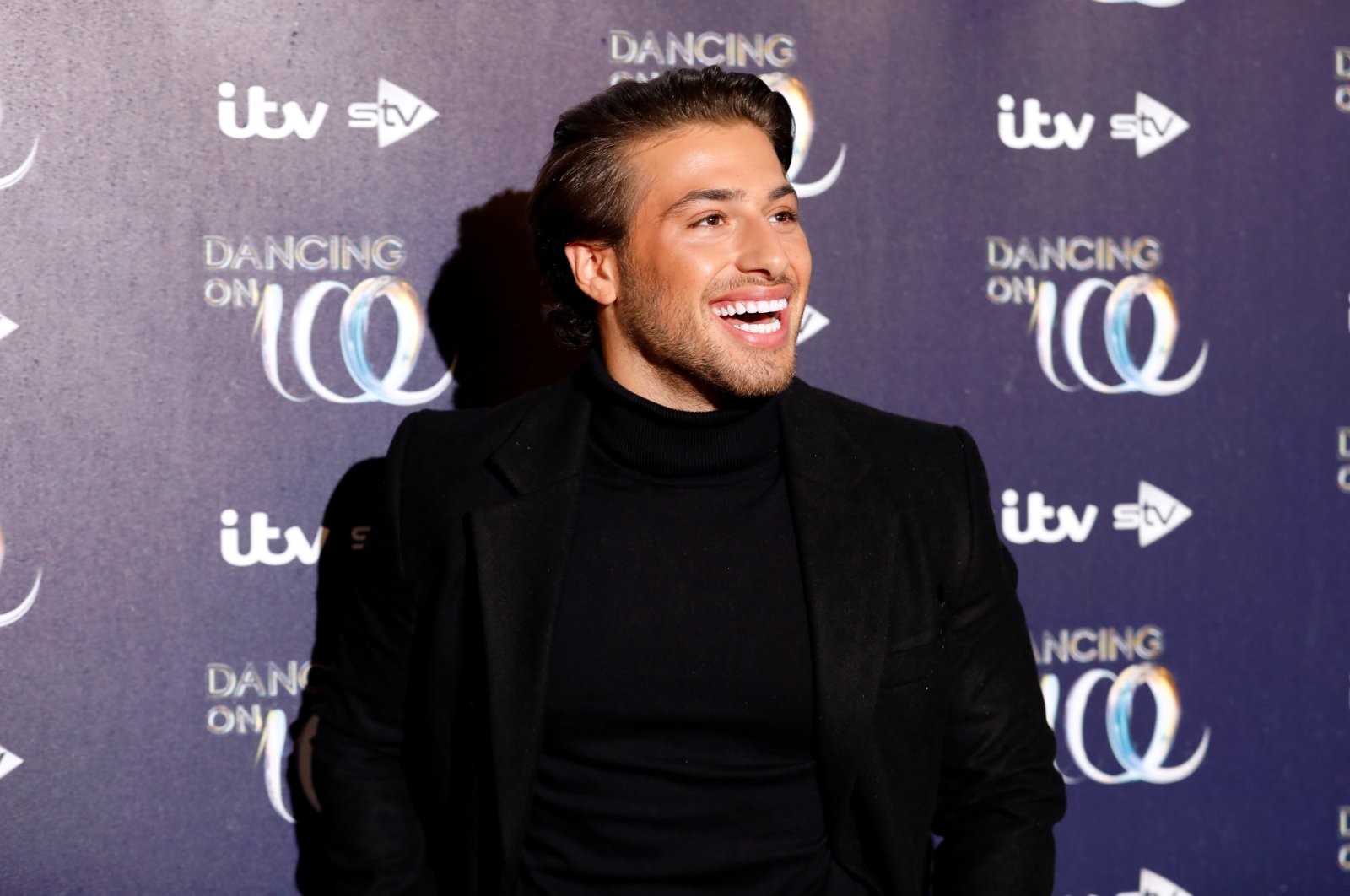 After winning the reality show ‘Love Island’ on ITV2, Kem Çetinay built a career as a TV personality and presenter, appearing on many shows. The Brit of Turkish Cypriot descent also looks forward to collaborating with Turkish media and brands

Kem Çetinay is a 25-year-old TV personality, brand ambassador, businessperson, and above all, a role model for young people from the U.K. He comes from a traditional Turkish Cypriot family, which he regularly proudly displays on his social media accounts. The young celebrity is also tradition-conscious but modern at the same time and thus forms a bridge between the generations, as well as between Cyprus and Great Britain. In an exclusive interview with Daily Sabah, Kem answered questions about himself, his origins and his plans, giving us the exclusive scoop on topics that haven't been fully explored until today.

Kem became known through his appearance on "Love Island," a reality show that aired on British broadcaster ITV in 2017. He was previously a successful barber in a suburb of London located in Essex where he still lives today. At the beginning of the interview, he told us that a client and current friend persuaded him to participate in the reality show at that time, despite his family's reservations. Kem cited the genre of the show as the main reason for his parents' reservations, as it collided with their values and worldview. "But I wanted to try it out and was sure that I would develop a lot with and after the show. After I was accepted, I took six weeks off from work and actually thought that after my time there, I would return and continue as a barber, just with a whole new experience!" he explained. After Kem won the show, however, everything changed. "To be honest, at the time, I could not have imagined that my life would change so much – probably not even my family did. But they are very proud of me today," he said happily. There is no question that the TV star has evolved over the past four years. It was not only his physical appearance but also his early maturity that helped the charismatic young man from Essex to achieve his later success. Today he considers himself a lucky man, and rightly so! Unlike many other contestants, he later took part in many shows like presenting on the popular ITV breakfast show "This Morning," plus starring in his own entertainment show "You vs. Chris and Kem" and competing on "Celebrity Hunted" for Channel 4, "Dancing on Ice" for ITV and "Celebrity Masterchef" for BBC1. Kem has became a sought-after man in the London TV scene.

However, Kem Çetinay is not only very popular and successful but also a very open person. He has repeatedly spoken openly on social media and television of having suffered from anxiety in his childhood, even though this revelation has undoubtedly cost him a lot of overcoming. Today, Kem supports young people in the U.K. with mental health issues. Above all, he considers himself to be a door opener for young people in the Turkish community to face their fears and talk openly about them. "In Turkish families, people don't talk openly about their problems because their parents are strict, especially their fathers. But that had to change, and I showed that it is possible," the Briton of Turkish Cypriot origin explained. However, he felt the support of his father throughout his childhood and is still very grateful for it.

Kem's commitment to helping others, despite his young age and considerable achievements, shows that he is a helpful and humble person. This also makes him an exemplary celebrity. It is his openness and humility that not only help him appear authentic, but also show people the "real him," which is where Kem's popularity comes from. That is why he has gained many fans and friends from all over the world8 in a short time. He added in clear words, "I am only where I am today because the people around me and my fans support me and care about me."

The successful young man is, among all his other peculiarities, above all a proud Turkish Cypriot. "I am proud of my origins, and I openly confess that everywhere!" he told us. This is also confirmed by numerous articles circulating about him on the internet. "Many people welcome this and openly assume it," he emphasized. He still calls himself Kem instead of Kemal because people struggle to pronounce his full name correctly. Compared to the past, he speaks fluent Turkish today, which is due to the fact that he has spoken more Turkish lately, significantly improving his knowledge. Kem has also traveled several times to Turkey, where his parents and brother are currently on holiday. Laughing, he said his father had even considered moving to the small western Turkish town of Alaçatı in Izmir province. "I personally love Istanbul. The city is so amazing. But the only problem there is the chaotic traffic, I can't drive a car in that city. However, you can do so many great things as a young person in Turkey," he explained.

When we wanted to know what most Turkish and most British about him is, he said that the most Turkish thing about him is that he still lives with his family, likes to spend a lot of time with them and loves kebabs. He professed that his accent, passion for fish and chips and manners are the most British things about him. When we asked him if he would be willing to act in Turkish series or films, he replied clearly: "Yes, absolutely. In fact, I am a TV presenter and have only acted once on an advert on English channel, but I enjoyed it very much. I think that sometime in the future, the moment will come when I can do it. And I think once the right moment comes, opportunities for that will also come in Turkey." Besides this, Kem also announced that he would love to work with Turkish brands. The young celebrity has been working with the Irish textile discounter Primark for three years now, creating his own apparel collections. After two years of work, he has also recently launched his own grooming range, "Kem Cuts" with Primark, which he is particularly proud of. Firstly, as it is available in Primark shops worldwide, and secondly, because Kem was an excellent hairdresser before his realignment after 2017 – so the young man has stayed true to himself. "Kem Cuts" was originally the name of his YouTube channel, where he uploaded entertaining videos of him cutting celebrities' hair and having amusing conversations with them.

Still, that's not all the young talent has achieved. Parallel to show business and the brand ambassadorship for the Irish brand, he has also opened a cocktail bar called "Array" with business partner Nadir Gül in his hometown Essex in June 2021. As an aside, Kem noted that all the furniture and design comes from Turkey. "The Turks genuinely offer the world's best catering equipment and interior decorations. Our interior designer was a Turk from Istanbul." he told us enthusiastically. "With 'Array,' I wanted to bring the cosmopolitan London district of Mayfair to my hometown, giving people no need to travel to the capital. We offer world cuisine and exotic cocktails. We also employ chefs from all over the world. I'm currently working on sponsorship for chefs from different countries, including chefs from Turkey, to start with us easily. You can't replace the good taste they bring to the food through good craftsmanship. Soon we will also open a shisha cafe next to the cocktail bar," the young man declared. Kem can also cook Turkish food himself, as he stated in the interview: "At 'Celebrity Masterchef,' I mainly cooked Turkish food."

When we wanted to know how the idea for "Array" came about, he said: "I bought the place two years ago, before the pandemic started, with my business partner Nadir, who runs two restaurants in London. He is like an older brother to me. I am so grateful for the business together. We built 'Array' despite the pandemic and curfews, which was really hard, especially because we expanded the building under these circumstances and completely redesigned the interior. So I'm all the more pleased that things are going well now. We are fully booked until 2022." He also finds it breathtaking that prospective customers, friends and fans from all over the world come together in "Array" to see what is on offer, but also to meet him and take photos together. That gives him an incredible feeling.

Running a business is a tradition in his family, Kem told us. The majority of the family members are businessmen, from his father to his cousins to his grandfather. Describing the difference between running a business and a show business, he said, "After a TV show, I go home, and I can rest. When you own a business, you are constantly working. So, I'm working a lot at the moment because I do both, but I try to find a work-life balance. That's what my parents demand most of all." When we specifically inquired if he wanted to focus more on business in the future, he revealed that he was still young and had many dreams that he wanted to realize, and continued: "Yes, and I want to be creative first and foremost, but I also never want to give up the television business. That's where it all started. Besides, it's just a lot of fun and means a lot to me!"

Ultimately, we wanted to know how he manages to stay motivated in his very ambitious daily life. He answered confidently that the support of his family is his most significant source of motivation. Kem explained that it is a Turkish phenomenon that parents push their children non-stop to get better every day and that the children, in turn, strive to make their parents proud. He said this was also true of him and added, "To be honest, my dad motivates me the most. He is a great role model for me since he has worked so hard in life and continues to do so. My dad came from Cyprus to England under his own steam when he was 16 and built a new life here. He started at Pizza Hut as a cook, and today he is a successful businessman. This is admirable."

In response to our final question about what he sees as the most significant cause of lack of motivation among people of the younger generation, he said that the main problem is the negative attitude of young people today, which he associated with social media. He claimed that social media is perfect for networking but also has a meaningful downside. "A lot of people compare themselves with other people on social media, and that makes them unhappy," he noted, continuing: "That's why it's difficult for young people today not to be impressed by it and learn to deal with it."