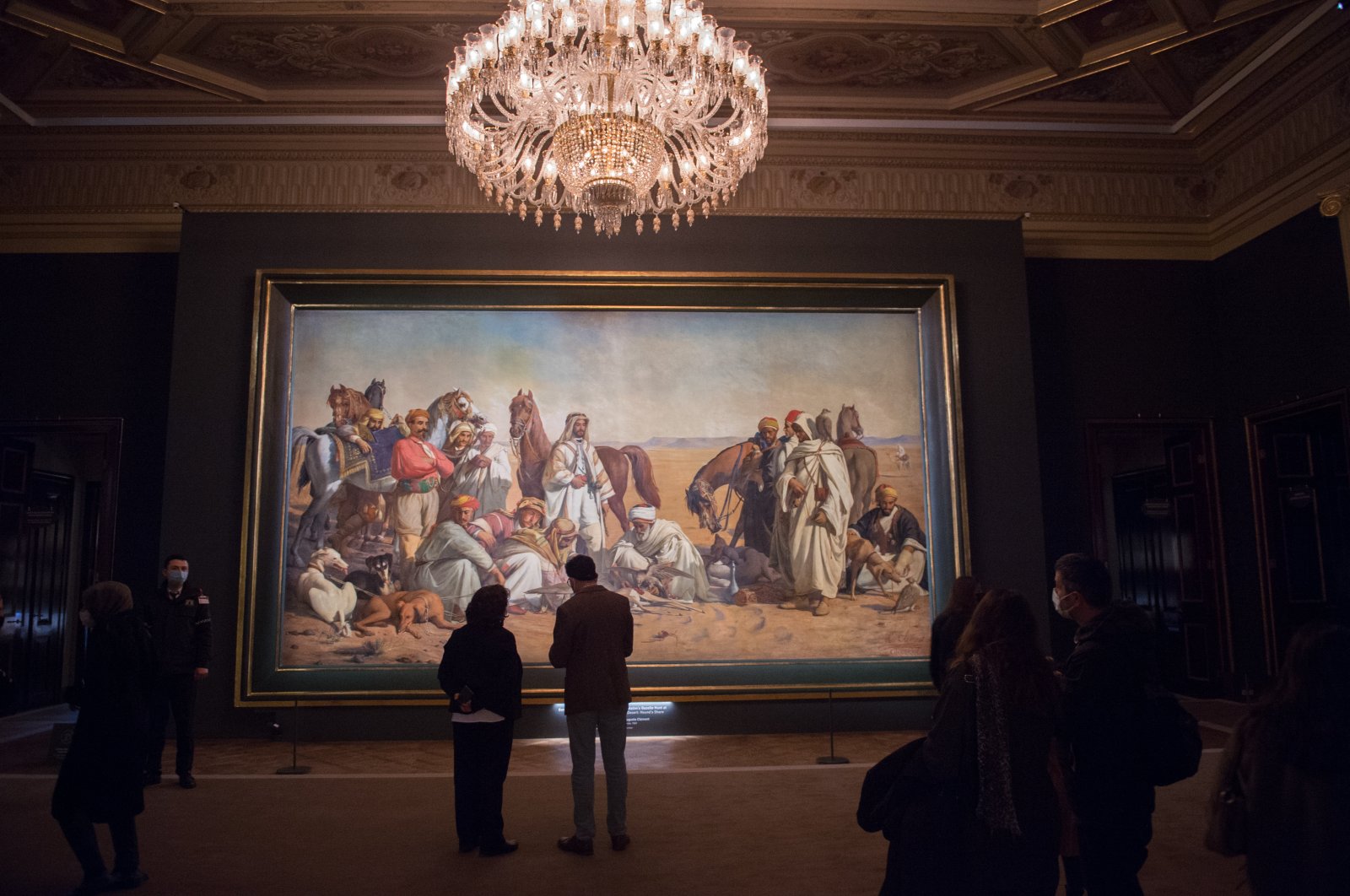 "The gazelle hunt of Prince Halim in the Gatah desert: the share of the hound dog" by Felix Auguste Clement on display at the National Palaces Museum, Istanbul, Turkey, Jan. 1, 2021. (Photo by İlhami Yıldırım)
by Anadolu Agency May 23, 2021 9:45 am
RECOMMENDED

The week of May 18-24 marks International Museum Week in Turkey. This weeklong celebration grew out of International Museum Day, an event organized by the International Council of Museums (ICOM) since 1977 to raise awareness of how museums “are an important means of cultural exchange, enrichment of cultures and development of mutual understanding, cooperation and peace among peoples,” according to the group’s website.

This year’s theme – with a seeming nod to efforts to reclaim public space after a year lost to the pandemic – is “The Future of Museums: Recover and Reimagine.”

And one of the favorite museums of art enthusiasts despite the pandemic is Istanbul's National Palaces Painting Museum, home to striking Ottoman paintings. The museum recently completed its restoration to modern gallery standards and was reopened by President Recep Tayyip Erdoğan this January.

It first launched in 2014 in the Dolmabahçe Palace’s Crown Prince Residence, the living quarters of heirs to the throne at Dolmabahçe Palace – the famed home of the Ottoman Empire’s last six sultans – and where Turkey’s founding leader Mustafa Kemal Atatürk spent his last days.

In 2014, only part of the Crown Prince Residence was opened for visitors, Gülşen Sevinç Kaya, the museum director, told Anadolu Agency (AA).

“The restoration of the other part was finished at the end of 2018,” she explained. “In the meantime, we carried out work furnishing both the newly opened and existing sections that are open to visitors.”

She added that with the addition of Topkapı Palace paintings to the collection, the museum tripled the number of exhibited paintings from 200 to 600 following the restoration work.

The two-story museum boasts sections on classical Turkish painters such as Osman Hamdi Bey and Şeker Ahmed Pasha as well as Russia’s Ivan Konstantinovich Aivazovsky. There are also halls such as Imagining Istanbul, Landscape Paintings in the Ottoman Palace and Gallipoli, the latter of which pays homage to the famed World War I (1914-1918) battle.

Another important artwork at the museum depicts Ottoman Prince Said Halim. "The gazelle hunt of Prince Halim in the Gatah desert: the share of the hound dog" is the largest painting of the National Palaces painting collection according to the museum director.

The large 1865 painting by France’s Felix Auguste Clement shows 13 people dismounted following a hunt. The painting was on display at Istanbul’s Said Halim Pasha Mansion before being transferred to the palaces museum in 2019.

Kaya also highlighted the museum's picturesque location as well as its beautiful garden and cafes. According to Kaya, visitors wanting to get the most out of the waterside museum should set aside a full day.