The stage where it happens: Broadway's bold plans for comeback 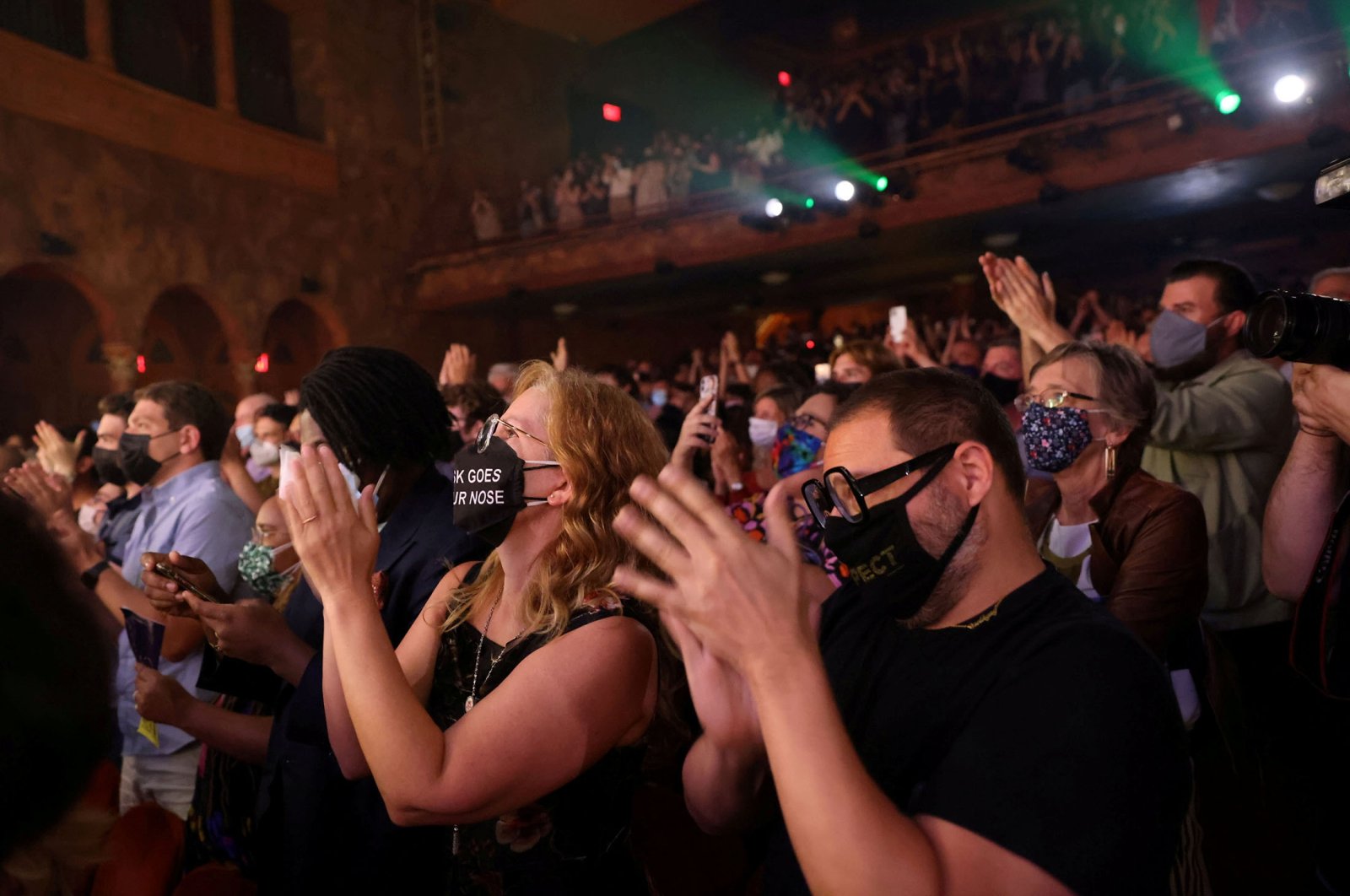 The audience gives a standing ovation after watching the opening night of previews for "Pass Over," following the 17-month shutdown of Broadway due to COVID-19, at the August Wilson Theater in New York City, U.S., Aug. 4, 2021. (Reuters Photo)
by Reuters Aug 19, 2021 12:41 pm
RECOMMENDED

After enduring the longest shutdown in its history due to the global COVID-19 pandemic, Broadway is set to revive itself in a month's time, reiterating that there is no business like show business. And it is determined in its big plans for the grand reopening with some new and promising investors, along with writers.

Optimism is strong for the reopening of musicals and plays starting in September, led by juggernauts "Hamilton," "The Lion King" and "Wicked."

Theaters will be allowed to open at 100% capacity with audiences, casts and backstage crews all required to show proof of vaccination.

Never risk-averse, Broadway producers are already backing new projects despite millions of dollars in lost ticket sales. The big three musicals were taking in about $1 million a week before the 18-month shutdown that began in March 2020.

"Producers produce what they're passionate about. There's nothing safe about what we do. If we wanted safe, we would be in investment banking, or an accountant, or a lawyer," said Ken Davenport, producer of Tony Award-winning musicals "Kinky Boots" and "Once on This Island."

"This is a business that favors the bold ... I believe we're about to see a renaissance of theater over the next five years," said Davenport, who has six new shows in development.

Mounting a new Broadway musical requires an initial investment of about $10 million-$15 million, including wages for the cast and crew, makeup, sets and advertising. Plays generally cost less than half that sum.

Broadway's optimism seems undaunted by the absence of influential producer Scott Rudin, who said in April he would take a step back after multiple allegations of bullying his staff. Rudin has apologized for his behavior.

Instead, Rudin's withdrawal has opened the way for new investors, while not deterring big budget projects like the first Broadway revival of musical "Funny Girl" and plans for a "Dreamgirls" revival.

"It hasn't left a void," said Gordon Cox, contributing theater editor for Variety. "There are whole groups of people who haven't previously been asked to invest in a Broadway show, or realized it was a thing they could get involved in. Now that they feel they can, it seems like a cool thing to do."

Not everything is rosy after the bruising shutdown.

Disney musical "Frozen" is not returning, nor is the Rudin-backed 2020 revival of "West Side Story." The two-part Harry Potter play is being condensed into one and there has been no word on pre-pandemic plans for revivals of classic plays "Death of a Salesman" and "Our Town."

The Broadway League has said it will not release official box office returns for the next few months, and ticket sales for some previously in-demand shows, including "Wicked" and "To Kill a Mockingbird," have been slow so far, according to ticketing websites.

However, seven new plays have been announced for this fall, all by black writers. Some are being financed by first-time Broadway investors, including co-founder of television network BET, Sheila Johnson, who is putting money behind the play "Thoughts of a Colored Man." Johnson and celebrity chef Carla Hall are also investing in a new musical called "Grace" about black culinary history.

Actor Blair Underwood and former basketball player Renee Montgomery are investing in the stage play "Pass Over," a modern twist on "Waiting for Godot."

"There is various new money that is coming into Broadway, and that money is extraordinarily helpful and it is also diverse money, which is also very interesting and new," said Brian Moreland, producer of "Thoughts of a Colored Man," opening in October.

Davenport says risk will always be part of Broadway's DNA.

"Some of the most successful and most exciting pieces of work, including 'Hamilton,' 'Fun Home,' 'Spring Awakening,' 'Hadestown,' 'Dear Evan Hansen,' have all been shows that, if you look at them on paper you'd go like, 'Would anyone see that?,'" he said.

"We've seen some really bold, exciting choices this coming year, and that's what producers are doing. They're saying I'll love this piece, I love the message of this. I'm doing it, pandemic be damned, because it deserves to be on Broadway'," Davenport said.