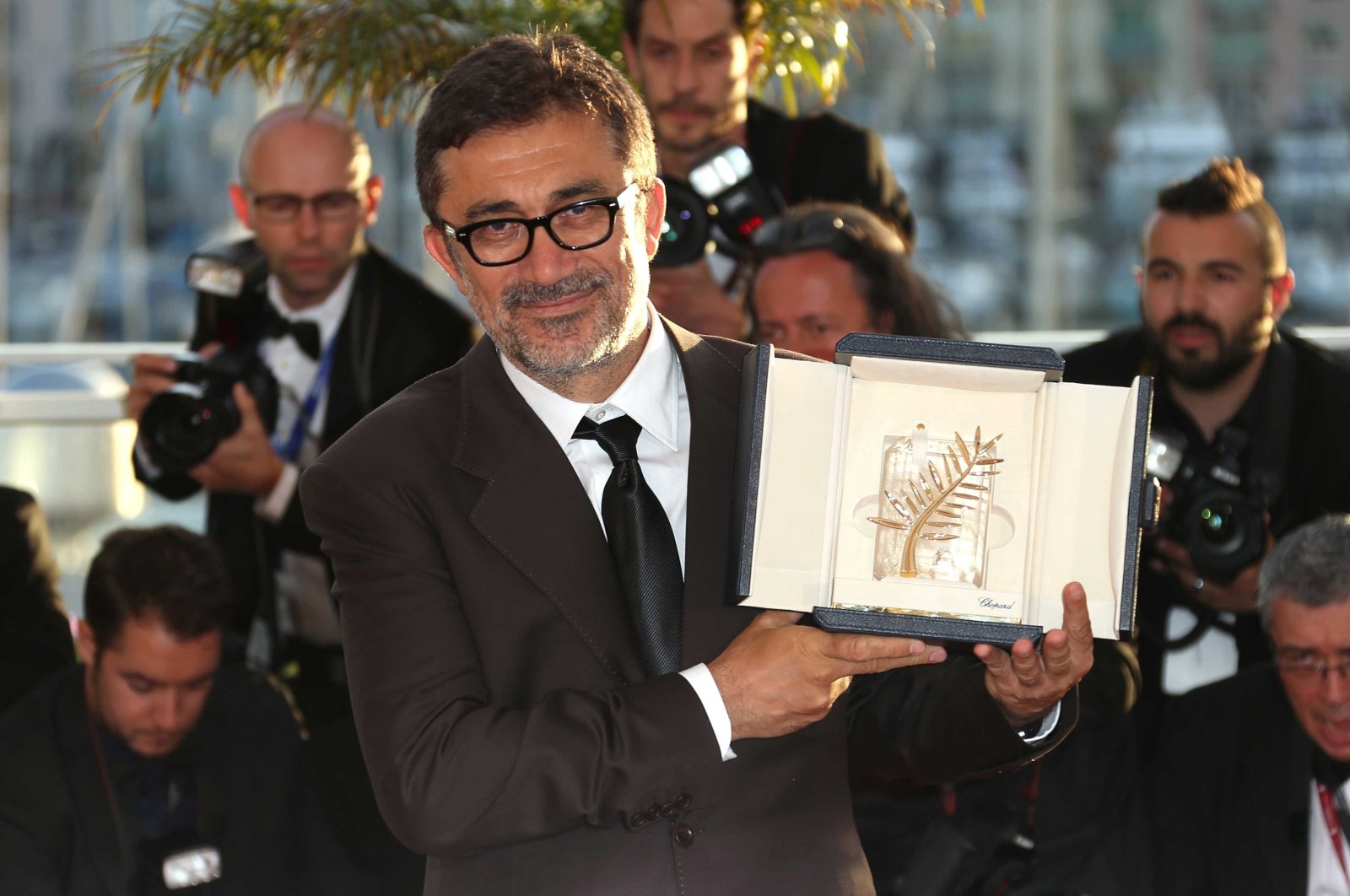 Director Nuri Bilge Ceylan poses with the palme d'or award for the film "Kış Uykusu" ("Winter Sleep") during a photo call following the awards ceremony at the 67th Cannes Film Festival, Cannes, southern France, May 24, 2014. (AP Photo)
by Hakan Arslanbenzer May 28, 2021 10:14 am

The award-winning director complements his stories sprouting from Anatolian lands with global features that anyone can easily identify with as his slow-paced, arthouse movies focus primarily on relationships, dialogue and emotion instead of action

Turkish cinematography and fiction have long been struggling to become international. Being adopted from the Western European models, both arts have dealt with the dilemma of satisfying national expectations while coping with global needs as well. Therefore, most Turkish productions do not attract much attention from abroad. As a result, many great Turkish filmmakers – such as directors Metin Erksan and Lütfi Akad and talented actors like Türkan Şoray and Kadir Inanır – have remained unknown to the global audience.

Though the European audience got to know Turkish director and actor Yılmaz Güney in the early 1980s, it was undoubtedly a political interest and had little to do with the qualities of Güney’s cinema. Before he broke out of prison and fled to France because of his conviction for murdering a local judge in southern Adana province, Güney was a purely domestic personality within Yeşilçam, the classical Turkish cinema. He had made some films with political implications, but they could scarcely be considered global films. Though Güney won the Palme d’Or in 1982 for “Yol” (“The Road”), the actual director of the film was indeed Şerif Gören, which is weird for such a global award.

Unlike Güney's controversial situations and his Palme d’Or win, contemporary Turkish director and screenwriter Nuri Bilge Ceylan has been credited for his cinematography and has won four separate awards at the Cannes Film Festival – the grand prix for “Uzak” (“Distant”) in 2002 and “Bir Zamanlar Anadolu’da” (“Once Upon a Time in Anatolia”) in 2011, best director for “Üç Maymun” (“Three Monkeys”) in 2008 and finally the palm d’or for “Kış Uykusu” (“Winter Sleep”) in 2014. He also won many other awards for his work including four Golden Orange awards at the Antalya Golden Orange Film Festival and Fipresci Awards including the grand prix at San Sebastian Film Festival.

All of these trophies show how Ceylan’s work is perceived by European film critics. According to them, Ceylan is a European filmmaker with a global understanding of filmmaking in a domestic setting that only happens to be Turkey. One can suggest that Ceylan’s films would not lose many of their features even if they were shot in any other country, language, et cetera. They are purely global. The only local features of these films are the Turkish language, which is spoken for less than one-fifth of every film’s duration; the most beautiful sights of Anatolia, which are a direct outcome of Ceylan’s experience as a travel photographer, and the outlook of the local villagers and townspeople.

Nuri Bilge Ceylan was born on Jan. 26, 1959, in Istanbul’s Bakırköy district, though he spent most of his childhood in Yenice in northwestern Çanakkale province. Yenice was his father’s hometown, and the Ceylan family moved to the town after their father, an engineer of agriculture, decided to serve there. Ceylan’s semi-autobiographical debut films, Kasaba (“The Small Town”, 1998) and “Mayıs Sıkıntısı” (“Clouds of May”, 2000) reflect his early impressions from his childhood in Yenice.

The Ceylans returned to Istanbul in 1969 so Nuri Bilge’s elder sister Emine could attend high school, which she could not do in Yenice at that time. Nuri Bilge spent his middle school and high school years in Bakırköy before he enrolled in the Chemical Engineering Department of Boğaziçi University in 1976. After two years’ study, he reentered the university exams and studied in the Electric-Electronic Engineering department of the same university. Ceylan says that his transfer between the engineering departments was because of violent political incidents among students at the university's Maçka Campus where his previous department was located. After his transfer, he found more peace in studying.

Though trained to be an engineer, Ceylan was also interested in the art of photography, which would become his job after graduation. His other interests included mountaineering, playing chess and traveling. He was a regular at the Cinema Club at Boğaziçi University, where he realized his love for black and white motion pictures. He traveled to both Europe and the Himalayas after his graduation in 1985. After 18 months of military service, he made up his mind to become a filmmaker. Meanwhile, he worked as a photographer to make a living.

From individual to society

Ceylan made a short film named “Koza” (“Cocoon”) in 1993, which competed at the Cannes Film Festival in 1995, a first for the Turkish film industry. In the following couple of years, Ceylan made a semi-autobiographical trilogy, comprising of “Kasaba,” “Mayıs Sıkıntısı” and “Uzak.” In this trilogy, which he produced with his family and friends, there were no professionals except Ceylan himself as he was a talented travel photographer at that time. “Uzak” became a national cult classic, especially after it was awarded at Cannes, which also brought international recognition to the director. After that, he became a regular personality at the Cannes Film Festival.

Ceylan's initial trilogy is the product of his love toward his fellow people, hometown and human boredom. Nothing good or bad happens in any of those three films and there is very little dialogue as nature speaks more than human beings. Everybody is stressed and bored but the audience is well aware of the fact that someone will leave the country at the end.

After those films showed separate individuals, Ceylan moved on to the portrayal of intercourse between men and women, the theme at the heart of “Iklimler” (“Climates,” 2006), “Üç Maymun” and “Bir Zamanlar Anadolu’da.” In all three films, there is a problematic relationship between certain male and female adults. In fact, “Bir Zamanlar Anadolu’da” is an elegy for the male gender’s failure against the female. Thanks to the professionalism of the actors, the movie became a national legend. Every art film lover finds a part for them in that film.

Ceylan’s most recent films, “Kış Uykusu” and “Ahlat Ağacı” (“The Wild Pear Tree,” 2018) deal with more social problems than his previous films did. “Kış Uykusu” is the story of an alienated and narcissistic public intellectual against the real public, while “Ahlat Ağacı” shows the conflict among three generations – the son, the father and the grandfather. Both films have been lauded as the director’s masterpieces.

Ceylan is now filming a new movie titled “Kuru Otlar Üstüne” (“On Dry Grass”). Supported by the European Council’s Eurimages Fund, the movie tells the story of a schoolteacher who loses perspective during his mandatory service at a village school while hoping for a transfer to the big city.