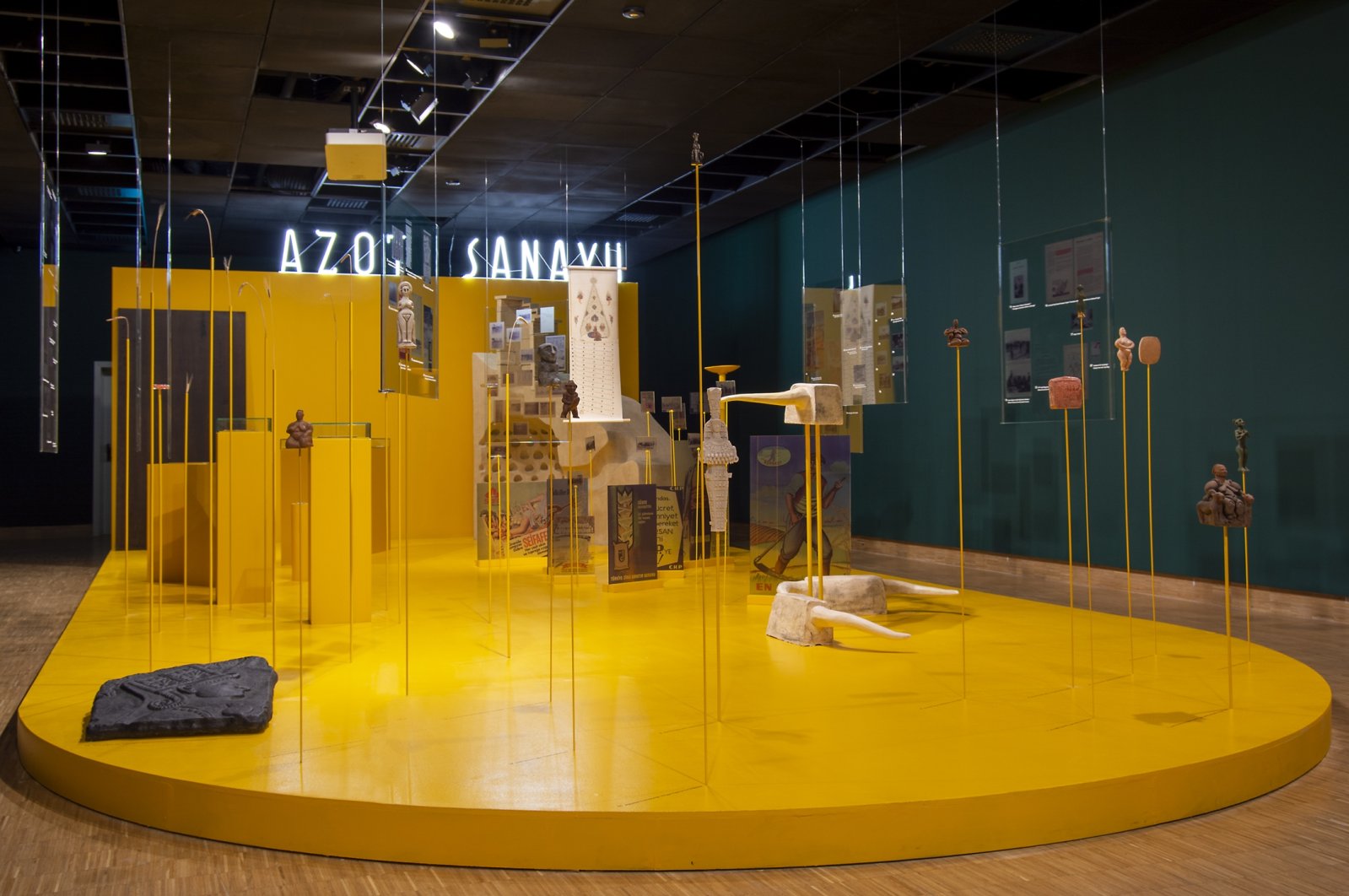 Prior to modern technology’s tracking atmospheric systems, people kept records of climactic change according to measures of importance that they could not foresee. And before humans left a trace, nature was leaving a trail of signs. In their research-heavy exhibition, encompassing five expansive multimedia installations, London-based duo Cooking Sections mounted their piece, "Weathered" (2021), in the entryway of SALT Beyoğlu to demonstrate climatological literacy across the epochs.

“Weathered” is comprised of fossilized tree specimens, with some dating back over 40 million years. The vast scope held within their approach is divided into seven topographies based on those discerned by the First Geography Congress in Ankara, organized under the auspices of the Ministry of National Education in 1941. In terms of climate, soil and yield, Turkey, they surmised, is an agglomeration of the Marmara, Aegean, Black Sea, Mediterranean, Central Anatolian, Eastern Anatolian and Southeastern Anatolian regions.

Vertically latched onto the characterful stone columns that uphold the foyer atrium at SALT Beyoğlu is a prehistoric sequoia, its threaded bark texture still intact. Hailing from an overlap of geological eras 28 to 23 million years old, when the Upper Oligocene became the Early Miocene, its discovery speaks of a time when the planet was cooling, as coal deposits began to form in Thrace, eventually serving today's extractive industries that contribute to unprecedented global warming.

Cooking Sections exhibited the sizable piece of ancient sequoia with the knowledge that its presence indicates a mild, swampy wetland environment, which, until recently was found to stretch farther than previously understood, spanning Turkey's European landmass to Central Anatolia through the Pliocene epoch, going back 5 million years. Besides fragments of sequoia wood, most of the fossils presented for "Weathered" are leafy impressions on stone, including palms that prove how the western forests abutting the Black Sea were once tropical.

Just as intriguing are the textual sources that accompany "Weathered," gleaned from an Ottoman newspaper, “La Turquie,” which ran from 1874 to 1895. Drawn from the archives of SALT Research and translated into English, excerpts detail the ways in which local populations around Turkey's far eastern city of Erzurum and southern city of Adana endured extreme cold. The winter of 1874 was especially cruel. While people and animals died, the rich began to hoard and agriculture became newsworthy.

In their text prefacing “Weathered,” Cooking Sections elaborates on early climatology as the “constructed aggregate" of both arboreal fossils, with respect to their informing conditions in the present, and unscientific reportage that when organized appropriately evidences the drifting of seasonal patterns. Observable drift is at the crux of the institution-wide exhibition titled “CLIMAVORE," referring to a newfound awareness of diet as directly and immediately tied with the fate of the planet's climate.

At the bottom of the sky

“Weathered" provides historical background and environmental context at “CLIMAVORE,” chronicling Turkey's meteorological technology, which began officially with the opening of its first modern station in Ankara in 1927 and was preceded by imperial efforts in Istanbul with French and German support. The turn from scattered, informal anecdotes for public broadcast to regular scientific monitoring shared among peers in the field between Europe and Anatolia has a corollary in the work that Cooking Sections is exporting to Istanbul's cultural sector.

Coincidentally, the means of more accurate climatological observation have emerged simultaneously with industrial degrees of consumption, not only of food agriculture but of the broader ecology. Such is the reasoning behind the display of freshly hewn hornbeam and pine to conclude "Weathered" with a cautionary note as fast-wood plantations are harvested to abandon, exacerbating the malign effects of climate change. The installation that follows, titled “The Lasting Pond” (2021), is an apt representation of mass consumerism.

Furnished with 1,000 ceramic dairy pots traditionally used as a vessel for sütlaç, a milky sweet pudding, and a single photograph, "The Lasting Pot" is a prolific assessment of the water buffalo’s migration from Bulgaria, across the Thracian plain into northwestern Turkey. Mining and urbanization have created a triad of interdependent alterations to the region's land, animals and people. Since the 1990s, water buffalo have adapted to the shuttering of mines, bathing in its flooded pits, but ongoing construction projects pose fresh challenges.

As with their tree fossils, Cooking Sections got their hands dirty for “The Lasting Pond,” conversing with local buffalo herders, extracting clay from migration routes to make their ceramic pots on display in collaboration with potter and archaeologist Başak Gökalsın, as well as the surviving buffalo milk shops in Istanbul. And they went further, advising the renowned Culinary Arts Academy (Mutfak Sanatları Akademisi) to add buffalo milk as an integral ingredient in their pastry curricula.

If that was not enough, Cooking Sections revitalized a project by artist Serkan Taycan, entitled “Between Two Seas” (2014), mapping the buffalo wallows, and prompting keen audience members at SALT Beyoğlu to go and see the drift for themselves. Water buffalo are juxtaposed with farmed fish in the adjacent installation, “Traces of Escapes” (2021), an eerie video series of circular breeding pools projected from ceiling to floor, complemented by an Anglophone voice discussing the philosophy behind the science of genetic engineering.

“Traces of Escapes” is well paired with another installation at “CLIMAVORE,” titled “Unicum" (2021), as both address changes in Turkey's surrounding waters. The Black Sea is said to increasingly assume a warmer, more Mediterranean genealogical makeup as a result of climate shifts and the introduction of foreign species of fish and algae brought in during the shipping booms of the last decades. “Unicum" also features a voiceover, only in the whistling, bird language native to the Black Sea, as its speakers bemoan the loss of staple seafood.

An impressive, digitally cataloged archive of farming history in Turkey rounds out the extensive multi-installation exhibition of “CLIMAVORE” with a piece called "Exhausted" (2021). And it is an utterly exhausting assemblage of objects and ephemera, encompassing everything from neolithic female figurines dated to as old as the 8th millennium B.C., Ottoman decrees garlanded with floral motifs to country fair paraphernalia from the early Turkish Republic. “Exhausted" is quite up to speed, showing Turkish corn seeds in 2021 as susceptible to the spread of GMOs illegal in Turkey.

Cooking Sections then explored further with e-flux architecture to foment a number of critical essays. Among them, Onur Inal, a postdoctoral researcher in Near Eastern Studies at the University of Vienna and founder of the Network for the Environmental History of Turkey, wrote about the importance of soil within an anthropogenic frame. His piece, "Nourishing the Soil, Feeding the Nation” went succinctly and carefully through medieval to contemporary periods in Turkish farming, culminating in a demand for organics among small-scale growers. While it may seem to be an obvious conclusion, the history of its progression is rife with stunted growths and dangerous additives. And the fertilization of Turkish soil remains controversial.