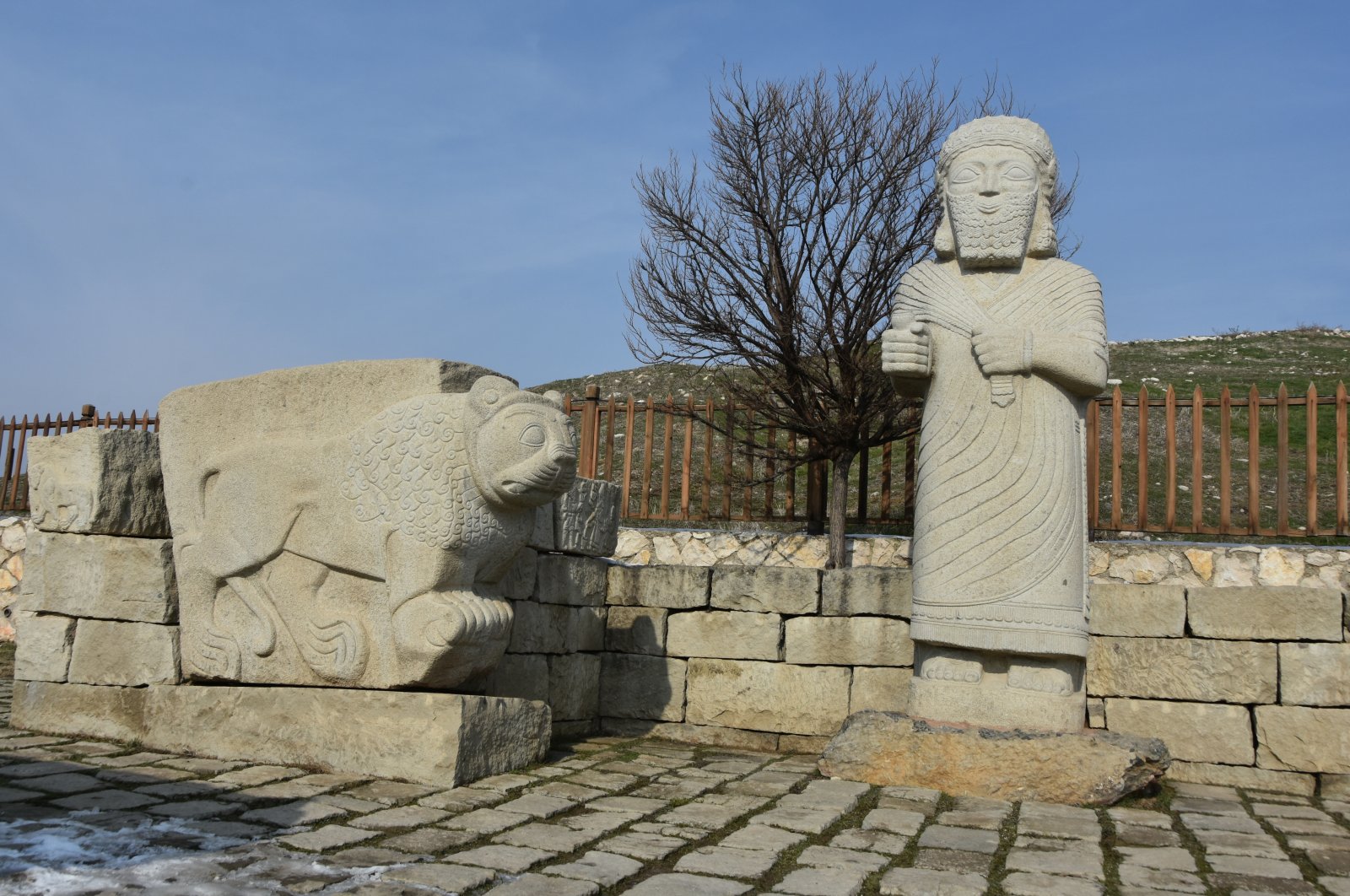 The statue of the Hittite king Tarhunza near a lion statue at the entrance of the Arslantepe Archaeological Site, Malatya, eastern Turkey, Feb. 5, 2021. (AA PHOTO)
by Anadolu Agency Feb 07, 2021 1:28 pm
RECOMMENDED

The Arslantepe archaeological site in eastern Turkey’s Malatya province is poised to enter the UNESCO World Heritage Permanent List during a meeting of the International Council on Monuments and Sites (ICOMOS) scheduled for this spring.

While the first excavations at the archaeological site, which dates back to 5000 B.C., was carried out by a French team headed by Louis Delaporte in 1931, teams from the Sapienza University of Rome have been excavating the site on a regular basis since 1961. The conservation works at the site continue under the control of the Directorate General of Cultural Assets and Museums of the Ministry of Culture and Tourism and in coordination with the Malatya Provincial Directorate of Culture and Tourism and Battalgazi University.

The Arslantepe archaeological site, one of the city’s landmarks of great historical and archaeological importance, was included in the tentative list of UNESCO World Heritage Sites in 2014. Although UNESCO was supposed to make its decision to include the site in its permanent list last year, the organization could not announce it as necessary studies and meetings were not conducted due to the coronavirus outbreak.

Battalgazi Mayor Osman Güder said they applied to UNESCO for better international recognition of the historical wealth of the site, which dates back 7,000 years, and the process still continues.

Indicating that they are waiting for Arslantepe to be included in the UNESCO’s World Heritage Permanent List, Güder stated that they have worked on the UNESCO applications with shareholders as the archaeological site is not a cultural place only belonging to Malatya but to Turkey. “We are continuing to work with our partners – Inönü University, Metropolitan Municipality and the Provincial Directorate of Culture and Tourism – to revive the region and bring it to humanity,” Güder noted.

According to Güder, ICOMOS experts visited Arslantepe last year and appreciated their efforts. “The COVID-19 outbreak has delayed the process. Under normal circumstances, the ICOMOS meeting would be held in June 2020 to assess our efforts for Arslantepe. The meeting could not be held in the sixth month due to the outbreak. Our expectation is that the meeting will be held in spring, and Arslantepe will be placed on the permanent list,” he said.

Saying that they are working for the zoning and environmental protection of the site, Güder noted that they are expropriating some of the private properties around Arslantepe. In this way, the municipality will build a center to display the unearthed artifacts next to the site.

Located in Orduzu, 7 kilometers (4.34 miles) northeast of Malatya’s city center near the west bank of the Euphrates River, the Arslantepe archaeological site served as a settlement from 5000 B.C. to the 11th century A.D. It was used as a Roman village during the fifth and sixth centuries A.D. and later served as a Byzantine necropolis. The site hosts various findings related to the birth of a state system and the transition from an egalitarian social structure to a hierarchical one.

As a result of excavations in the late Hittite layers of the site, a courtyard decorated with low relief on stone, two lion statues on both sides of the entrance gate as well as a statue of the Hittite king Tarhunza and a late Hittite Palace were unearthed. Other findings include an adobe palace dating back to 3300-3000 B.C., a 3,200-year-old ivory tablet, a temple dating back to 3600-3500 B.C., more than 2,000 seal prints, a 5,700-year-old child skeleton and high-quality metal objects. The artifacts reveal that Arslantepe was an official, religious and cultural center where the aristocracy was born.