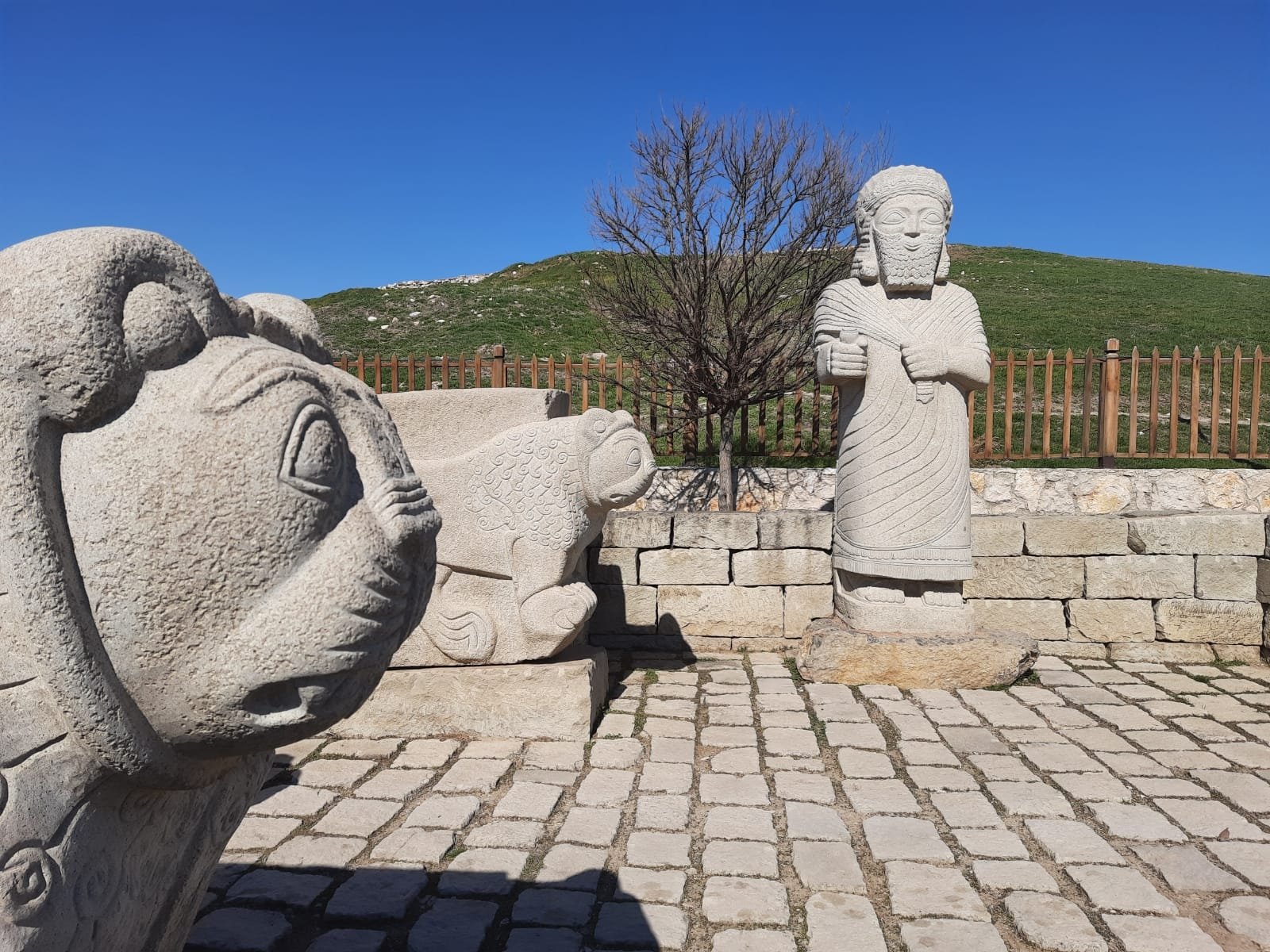 Two lion statues on both sides of the entrance gate and a statue of the Hittite king Tarhunza in the archaeological site of Arslantepe, Malatya, eastern Turkey. (Courtesy of Ministry of Culture and Tourism)
by DAILY SABAH Jul 26, 2021 4:20 pm
RECOMMENDED

The archaeological site of Arslantepe in Turkey's eastern Malatya province has been registered on the UNESCO World Heritage List, becoming the country's 19th asset on the list.

Arslantepe, meaning "Lion Hill," was accepted onto the UNESCO Tentative List of World Heritage sites in 2014. The mound became a world heritage site with the decision taken at the 44th World Heritage Committee meeting held online between July 16 and July 31.

According to the UNESCO website, Arslantepe is an "exceptional testimony to the first emergence of state society in the Near East." In other words, the 4 hectares (40,000 square meters) and 30-meter high archaeological site show the fundamental changes in the formation process of the state in Eastern Anatolian and Mesopotamian societies.

Arslantepe Mound has been inscribed as a World Heritage Site thanks to its various outstanding universal values such as witnessing the change of cultural traditions and hierarchy along with the emergence of new social and political systems based on social differences and economic privileges.

The site is also a source of new developments in monumental architecture, technology and the arts, in addition to administrative and political improvements throughout the fourth millennium B.C.

The mound served as a settlement from the Chalcolithic period to the 11th century A.D. It was used as a Roman village during the fifth and sixth centuries A.D. and later served as a Byzantine necropolis. It hosts various findings related to the birth of a state system and the transition from an egalitarian social structure to a hierarchical one.

The first excavations at the archaeological site were carried out by a French team headed by Louis Delaporte in 1931. The teams from the Sapienza University of Rome have been excavating the site on a regular basis since 1961. The conservation works at the site continue under the control of Turkey's Directorate General of Cultural Assets and Museums of the Ministry of Culture and Tourism and in coordination with the Malatya Provincial Directorate of Culture and Tourism and Battalgazi University.

As a result of excavations in the late Hittite layers of the site, a courtyard decorated with low reliefs on stone, two lion statues on both sides of the entrance gate as well as a statue of the Hittite king Tarhunza and a late Hittite palace were unearthed. Other findings include an adobe palace dating back to 3,300-3,000 B.C., a 3,200-year-old ivory tablet, a temple dating back to 3,600-3,500 B.C., more than 2,000 seal prints, a 5,700-year-old child skeleton and high-quality metal objects.

The artifacts show that Arslantepe was an official, religious and cultural center where aristocracy was born.