Winston Churchill and obscure aspects of the Gallipoli Campaign 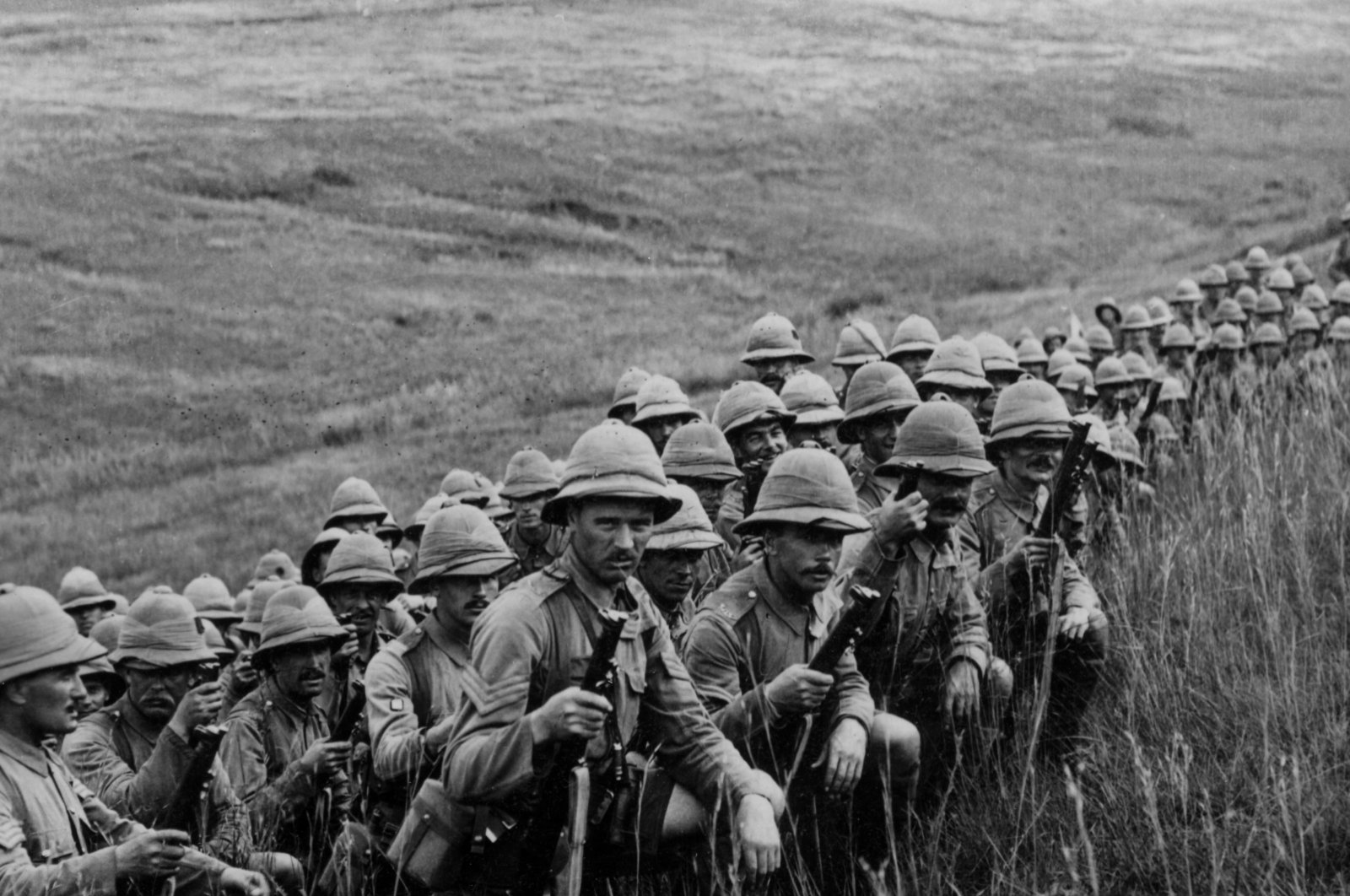 The reserves of the Allied forces wait for orders to move up to their new positions on the slopes of Cape Helles during the Gallipoli Campaign 1915-1916.
by Mehmet Hasan Bulut Jul 25, 2021 2:22 pm

Let’s look at the Gallipoli Campaign, the effects of which continue even today, through the eyes of Winston Churchill, one of the main actors of this war. As a matter of fact, seeing historical events from different perspectives often opens one's horizons

The Gallipoli Campaign is one of the most famous battles of World War I (1914-1918) and one of the saddest in recent Turkish history. This war, which caused the death of thousands of young Turks and wiped out a generation, is celebrated as a victory today.

The Dardanelles Strait, which went down in Turkish history as “impassable,” was eventually passed three years after this war.

British statesman Lord Randolph Churchill took his 18-year-old son Winston, who was not a very bright boy at school, and introduced him to his close friend Lord Nathan Meyer Rothschild one day. The Rothschilds were a Jewish banker family that managed to become one of the richest families in the world thanks to the aristocratic families of Venice. Lord Rothschild, a member of the British branch of this family, transferred the guardianship of the young Churchill to Sir Ernest Cassel. Banker Cassel became a father-like figure in the life of Churchill, especially after Randolph's death, and managed Winston’s entire fortune probably because the young man did not know much about these things. This was how the rise of the young Winston, who would be the future prime minister of the United Kingdom and would go down in history, had begun.

Having the support of European powers, especially Italy, the Balkan gangs occupied Istanbul in 1909 and deposed Ottoman Sultan Abdülhamid II. Thus, the Ottoman Empire actually disappeared from history, and New Turkey, a part of the New World, was established under the leadership of the Committee of Union and Progress (CUP), known as the Young Turks. Churchill's tutelar Banker Cassel established the Turkish Petroleum Company and obtained all the oil concessions from the Unionists in the territory of New Turkey. On the other hand, he, together with his Jewish friend Jacob Schiff, began to make preparations for the revolution in Russia to overthrow the Tsar. Our hero Churchill also became the U.K.'s First Lord of the Admiralty in 1911.

When Churchill became head of the navy, he had new oil-powered Queen Elizabeth class ships built as a first step. On top of that, he enabled the British Government to acquire 51% of the shares in the Anglo-Persian Oil Company (today's BP), founded in 1909.

Then the expected World War broke out in 1914. Britain, France, Italy and Russia were allies. New Turkey entered the war on the side of Germany. British Secretary of State for War Lord Kitchener wanted to help the allied Russians, who were stuck in the Caucasus. He asked Churchill to draw the attention of the Turks to the west, namely Gallipoli. Thereupon, Churchill took the old coal-powered ships of the navy, which were outdated after the dreadnoughts, and attacked Gallipoli. The only new ship involved in the operation was HMS Queen Elizabeth, and she was brought in for testing. There was no land support in the operation. Because the main target of Britain was not Istanbul but the forts of Çanakkale that blocked the road to Istanbul.

When the English ships came to Çanakkale, Queen Elizabeth began to shoot the forts from afar without taking any risk. The Anglophile wing within the CUP, which thought that the British were marching to Istanbul and saw their capital in danger, began to hold secret talks with the British. They offered to overthrow the government in Istanbul and sign an individual peace. But all of their efforts were in vain. The British had not yet achieved what they wanted from the war – such as Arab oil and a Jewish state in Palestine – and therefore they rejected the offer. The Anglophile Unionists would repeat their offer in 1917, but they would still get the same answer.

The forts of Çanakkale were silent; airplanes strangely were not used in the attack with ridiculous excuses such as bad engines or insufficient experience of the pilots. Moreover, no support was provided to the navy on the land despite Churchill's requests from time to time. Admiral Sir Sackville Hamilton Carden, the head of the British naval forces, decided to advance to Istanbul on March 18, but his name was written on the patient list two days before the attack. Then, the admiral was dismissed and replaced by his deputy, John de Robeck.

Things changed when Robeck came to power in the navy, which had suffered no casualties during Carden's duty term. As of 1:45 p.m. on March 18, the forts of Çanakkale were no longer able to respond to the fire of the British navy. The road to Istanbul was opened. But Robeck made a strange decision and, without waiting for the mines to be cleared, he advanced the ships. As a result, the ships hit mines and the ships Inflexible, Irresistible and Ocean were submerged. Thus, the naval campaign of Britain came to an end and the ships withdrew without making a second attack.

Henry Morgenthau Sr., the United States ambassador in Istanbul, could not understand why the Allied fleet had withdrawn in such a way. In fact, the ammunition of the Unionists was about to run out, and the government was in turmoil because the Turkish people hated the CUP and the Germans. Morgenthau discussed this issue with the German Wilhelm Leopold Colmar Freiherr von der Goltz, also known as Goltz Pasha and famed for his sympathy for the Young Turks. The pasha enlightened the ambassador by saying that the British had no intention of taking Istanbul. This is because they had to hand the city over to the Russians if they took it in line with their previous promises.

Goltz Pasha was right. It was the permanent policy of Britain to keep Russia away from Istanbul and the straits. Since Russia knew this and was suspicious of Britain’s promise, they sent a telegram to London and Paris to inform Britain and France again that the Tsar wanted Istanbul and the straits two weeks before March 18. Churchill strongly opposed this and advised his government to focus on post-Gallipoli interests. “British history will not end with this war,” he said.

After the naval battle, Britain started the land operation. Thousands of young intellectuals trained by Sultan Abdülhamid II were driven to the front by the Unionists under the direction of German officers. After these youth, who defended the strait with great efforts, fell dead on the lands of Çanakkale, the land operation finished. Moreover, during this operation, which lasted for about nine months, the mines were not cleared and the ships did not attempt to cross the strait.

Although the Gallipoli Campaign seemed like a failure from the British side, all of the ships Irresistible, Majestic, Ocean, Triumph, Inflexible and Goliath, which were sunk or damaged in Gallipoli, belonged to the old class that was no longer needed, like the Muslim youths who were martyred on the Turkish side. That is, Churchill and his guardians killed thousands of birds with one stone.

Moreover, those who started World War I in order to give their final shape to Russia and Turkey, which entered constitutional administration after the 1905 and 1908 revolutions, were approaching step by step to a new and final revolution in Russia. The tsar and his supporters were in a difficult situation. Lord Kitchener set out to reorganize and strengthen the Allied Russian army to fight against the communists trying to overthrow the Tsardom. However, his ship was sunk by an explosion on June 5, 1916. Not even poor Kitchener's body was found. The blame was also laid on a German mine.

In 1918, World War I ended. The aims of the war had been achieved. Tsarism, which was left without support in Russia, was overthrown and the Bolsheviks came to power. Britain, which promised a state to the Jews, easily defeated Turkey, who was tired at Gallipoli, on the Syrian front, and captured Jerusalem and Arab oil, leaving only the Anatolian lands in Turkey's hands. And also the Allies, who destroyed the forts in Çanakkale, passed through the strait freely and occupied Istanbul, where Sultan Vahideddin lived, three years later.

Churchill, who resigned from the Ministry of War after the Gallipoli Campaign, became the Secretary of State for the Colonies after World War I. While in this position, he was criticized in the British Parliament for placing the Russian Jews who conducted the Bolshevik revolution, in Palestine. He explained that they won the World War thanks to the American and Russian Jews and told the deputies that he supported Zionism. A state in Jerusalem was now the right of the Jews.

Churchill experienced a political downfall when Lloyd George's government fell in 1922 as they supported the Greeks against Ankara in the Greek occupation of Anatolia. The Christian British people hated Churchill, who served Jewish interests. That's why he wasn't elected for two years. But he spent his time as an intermediary between the government and the Jewish oil companies in this period.

Meanwhile, an English nobleman named Lord Alfred Douglas claimed that Churchill worked for Jews and made them rich by defrauding Britain. Douglas and Churchill went to court over this claim. The trial lasted only eight minutes, and as a result, Douglas was jailed without an investigation.

The following sentences of the convicted Douglas about Çanakkale were interesting: “The Gallipoli Campaign was perfect and the Turks were compelled to surrender the fortresses that guarded Istanbul. But the Secret Hand had agents in every office, and just as the Turks were about to hoist the white flag with only 13 shells left, the British forces were given a 'mysterious' order to withdraw."