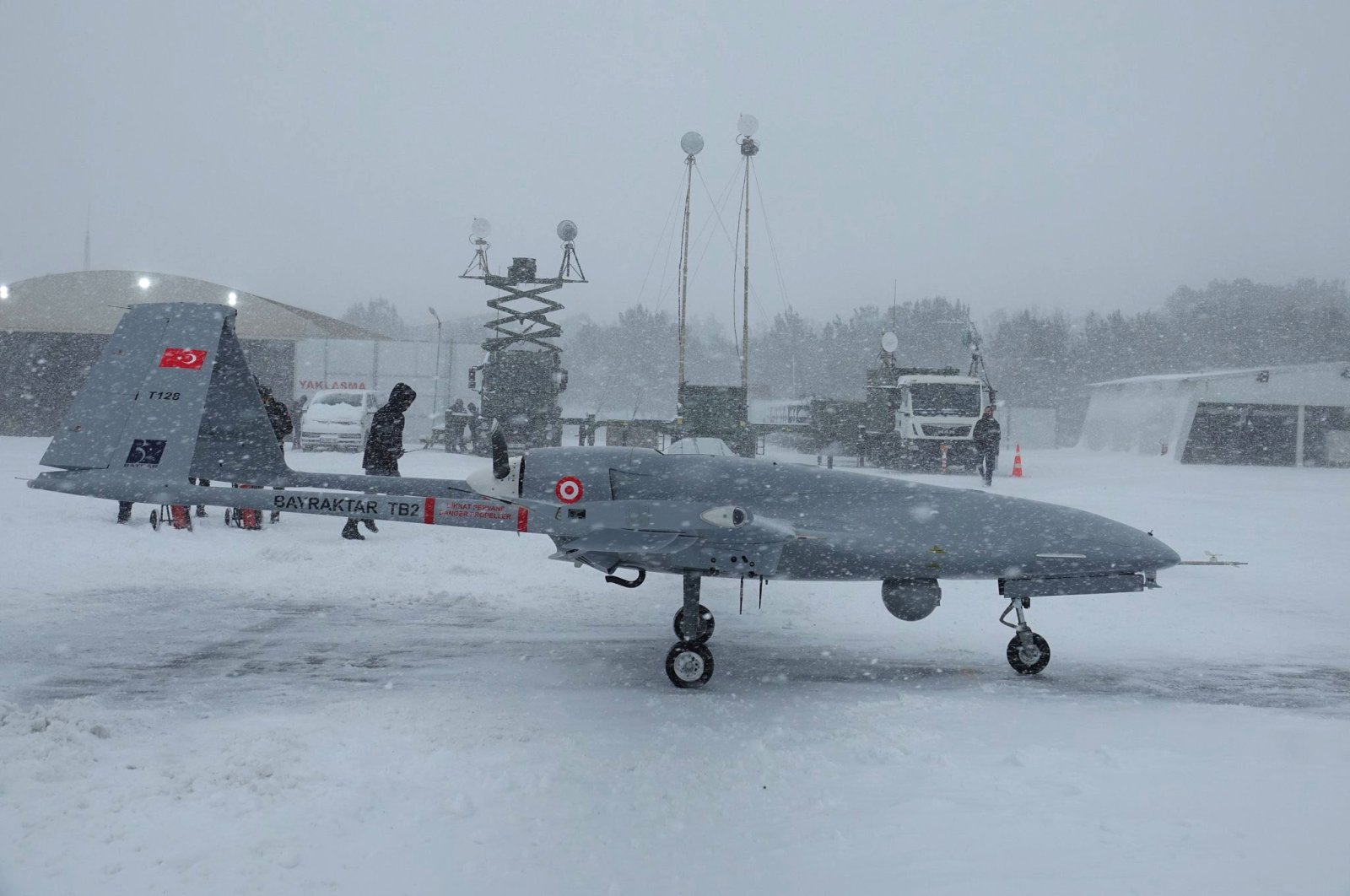 The statement by the company said the drone has achieved a significant milestone with this achievement.

Baykar’s chief technology officer (CTO) Selçuk Bayraktar shared a Twitter statement on the development, listing the missions that the Bayraktar TB2 has been a part of or will be a part of, including Turkey’s cross-border counterterrorism operations in Syria that targeted PKK and Daesh terrorists, retaliatory operations against regime attacks, namely Operation Euphrates Shield, Operation Olive Branch and Operation Spring Shield; Operation Claw that targeted terrorists in Iraq, along with the Eastern Mediterranean missions and internal security operations as well as the humanitarian aid missions.

Ismail Demir, the head of the Defense Industries Presidency (SSB), also shared a statement via Twitter that read: “Our Bayraktar TB2 UCAVs, the supporter of the security forces in the skies, left behind 300,000 hours of flight freely in our skies. This pride is all of us.”

The drone initially entered the inventory of the Turkish Armed Forces (TSK) in 2014 as an unmanned aerial vehicle (UAV) and then integrated with the ammunition, becoming a UCAV. It is currently used operationally by the TSK, Gendarmerie General Command, General Directorate of the Security and the National Intelligence Organization (MIT).

Bayraktar TB2 UCAVs are produced with a record-breaking 93% of the parts manufactured indigenously. A total of 160 drones are in the inventories of four countries currently, which are Turkey, Ukraine, Azerbaijan and Qatar.

Baykar, which, since the early 2000s, has been domestically developing software and hardware systems which are some of the top value-added systems in the field of unmanned vehicles is among the leaders in its field worldwide, with engineers in 13 different disciplines.

The success of the Bayraktar TB2 UCAVs, which have been closely followed worldwide, also led to the export of the drones, a move that allowed an advanced aircraft to be exported for the first time in the republic’s history.

In 2020, the Baykar recorded an important export success worth $360 million (TL 2.5 billion). Apart from Ukraine and Qatar, Azerbaijan, which gained significant leverage against its recent armed conflict over the Armenian-occupied Nagorno-Karabakh uses the drones while negotiations are ongoing with other countries interested in purchasing the aircraft. According to the studies confirmed by defense analysts, many air defense systems, radar systems, tanks, armored vehicles, trucks, arsenals, positions and units belonging to the Armenian Army were destroyed with Bayraktar TB2s.

Turkey's domestically developed drone has also proven its capabilities overseas, having set a new 27-hour flight record during a demo flight in the Gulf country of Kuwait in 2019.

The Bayraktar UCAV took off from the runway in Kuwait on July 16 at 5:05 p.m. for its historic flight at an altitude of 17,000 feet in the presence of military delegations. Despite harsh weather conditions such as sand storms, high temperatures exceeding 42 degrees Celsius (107 degrees Fahrenheit) and turbulence, the historic flight was completed with a successful landing on July 17 at 8:08 p.m. Despite the wind blowing at 40 knots and turbulence during the takeoff and landing of test and demo performance, the flights were successfully carried out. The national armed UCAV covered a 4,000-kilometer (2,485-mile) range during the historic flight. In this way, the Bayraktar TB2 traveled around Kuwait four times: 961 kilometers of land and sea borders during the record flight.

The Bayraktar TB2, which continued to be operated in the field, became a game-changer, as dubbed by several international experts as well, in time. Defense experts point out that Turkey’s success in counterterrorism operations in a shorter-than-expected time and with fewer casualties is because of such drones. The drones had a particular role during Operation Olive Branch conducted in neighboring Syria’s Afrin against the PKK and Daesh terrorists, conducting flights that surpassed some 90% of all its flights put together. It flew a total of 5,300 hours during the operation. It was also taking part in operations that targeted PKK terrorists’ so-called leaders who are wanted with a Red Notice.

The UCAVs which contributed to the success of the TSK by increasing their reconnaissance and surveillance capabilities in Operation Peace Spring, also successfully destroyed many targets during the operation. Finally, for the first time in Operation Spring Shield, it destroyed many armored vehicles from howitzers to Multiple Rocket Launchers (MRL) and Russian-made air defense systems.

During that operation, the drones were used as the primary element on the battlefield, raising worldwide interest.

Moreover, they escorted Turkey’s Fatih and Yavuz drilling ships during their missions in the Eastern Mediterranean in areas that fall under the country’s continental shelf. They were also deployed in the Turkish Republic of Northern Cyprus (TRNC) for the same mission, flying there from Turkey’s southern coasts.

Bayraktar TB2 can carry four domestic smart ammunition MAM-L and MAM-C missiles produced by Roketsan on its wings. Its built-in laser target marker allows it to hit its target with precision. Turkey is among the six countries that can produce its drones and smart ammunition using domestic resources.

Among their humanitarian aid missions, the drones reached Elazığ province in eastern Turkey in a very short time of around 25 minutes after a 6.8 magnitude earthquake hit the region on Jan. 24, 2020, and conveyed video information from the points where transportation was difficult to Ankara and to the command centers of the provinces with earthquakes. In addition to supporting search and rescue activities from the sky, Bayraktar TB2 UCAVs also served to control the heavy vehicle traffic after the earthquake and to ensure the continuation of future aid without interruption.

They also took part in combating forest fires. Operating under the Ministry of Agriculture and Forestry, the national UCAV also played an important role in the protection of the forests by flying 24/7 and monitoring 3.5 million hectares of forest area.

Bayraktar TB2s followed the ongoing irregular migration movements in the Aegean Sea and the Mediterranean Sea from the sky and made a significant contribution to saving the lives of many irregular migrants and documenting human rights violations.