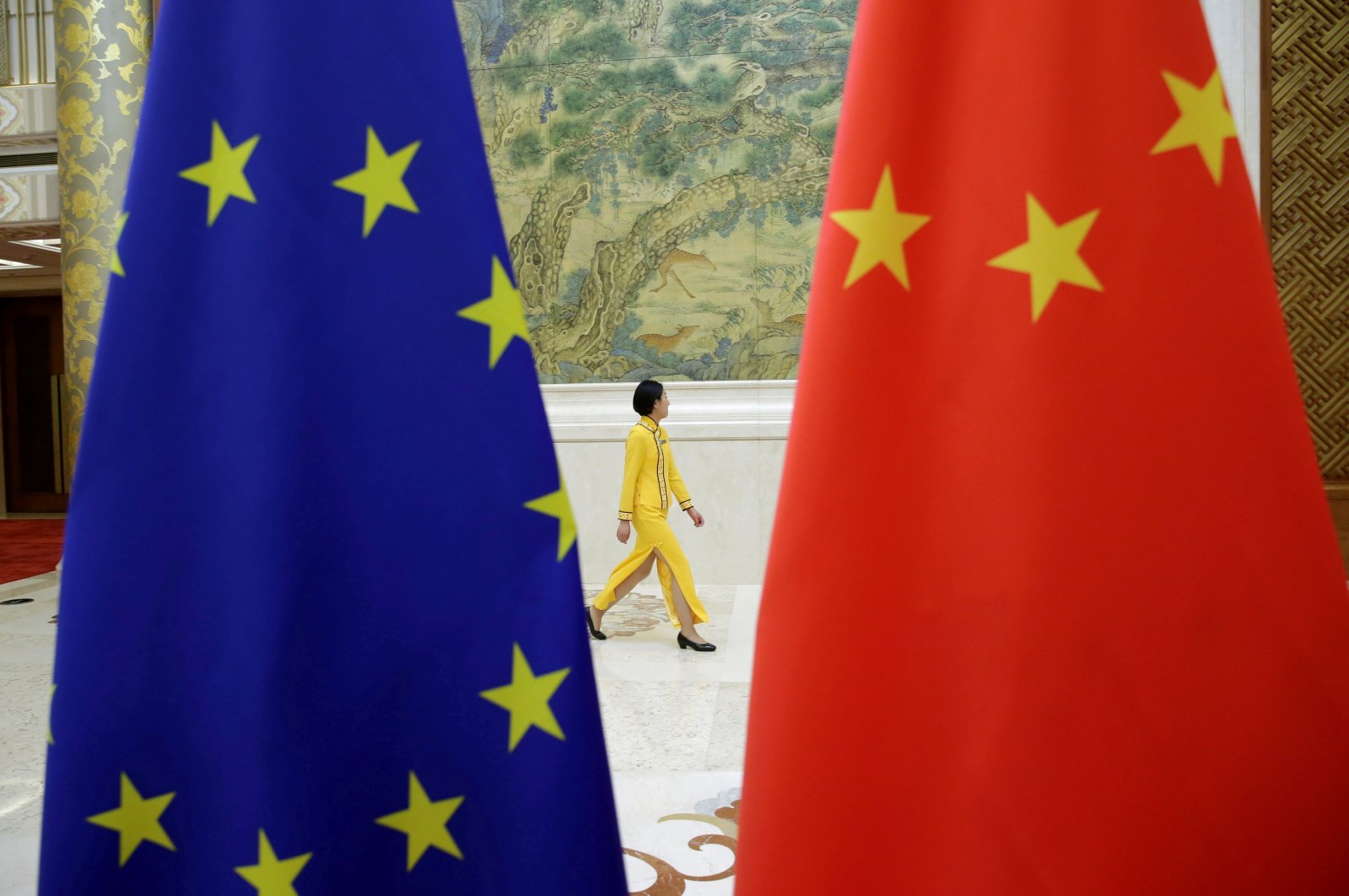 An attendant walks past EU and China flags ahead of the EU-China High-level Economic Dialogue at Diaoyutai State Guesthouse in Beijing, China, June 25, 2018. (Reuters Photo)
by ASSOCIATED PRESS May 20, 2021 8:15 pm
RECOMMENDED

The European Parliament halted on Thursday ratification of a long-awaited investment pact with China as long as sanctions against European Union legislators remain in place, deepening a dispute in Sino-European relations.

EU lawmakers adopted a resolution in which they condemned “the baseless and arbitrary sanctions" imposed by Beijing on European individuals and institutions in March.

The European Parliament’s criticism was echoed by European Commission Vice President Valdis Dombrovskis, who said after a meeting of EU trade ministers that China’s sanctions haven't created a favorable environment for a deal to be concluded.

“We cannot see this process of ratification outside of the broader context of EU-China relations,” he said.

The European Parliament said Beijing’s sanctions amount “to an attack on fundamental freedoms and urge the Chinese authorities to lift these wholly unjustified restrictive measures.”

China made its sanctions move after the EU, Britain, Canada and the United States launched coordinated sanctions against officials in China over human rights abuses in the western Xinjiang region.

The European Parliament's hard stance is likely to delay the ratification of the multi-billion investment accord that was agreed in principle in December and needs lawmakers' approval to take effect.

In addition to the lifting of sanctions, legislators said they will take into account the human rights situation in China when deciding to greenlight the multi-billion deal.

The EU hopes the agreement, known as CAI, will help correct an imbalance in market access and create new investment opportunities for European companies in China by ensuring they can compete on an equal footing when operating in the country.

EU companies face competition from state-owned Chinese enterprises that may get government support and easier access to financing.

“We were going to tackle the trade imbalance. But if you see what came out over the past months, we have extreme worry about human rights violations, especially if you look at slave labor," Dutch Foreign Trade Minister Sigrid Kaag said.

“And there are many companies investing in Xinjiang and it is unclear how the production happens and if slave labor is being used."

Chinese Foreign Ministry spokesperson Zhao Lijian said Wednesday that the agreement is “a balanced, mutually beneficial and win-win agreement, not a gift from one party to the other."

“Second, China’s sanctions on the relevant EU institutions and personnel who have long maliciously spread lies and false information on Xinjiang issues and seriously damaged China’s sovereignty and interests are necessary to safeguard its national interests,” Zhao said at a regular news briefing Wednesday.

“It is also a necessary, legitimate and just response to the European side’s confrontation with sanctions. It is clear cut that who unreasonably provoked troubles first and who was forced to take legitimate response.”