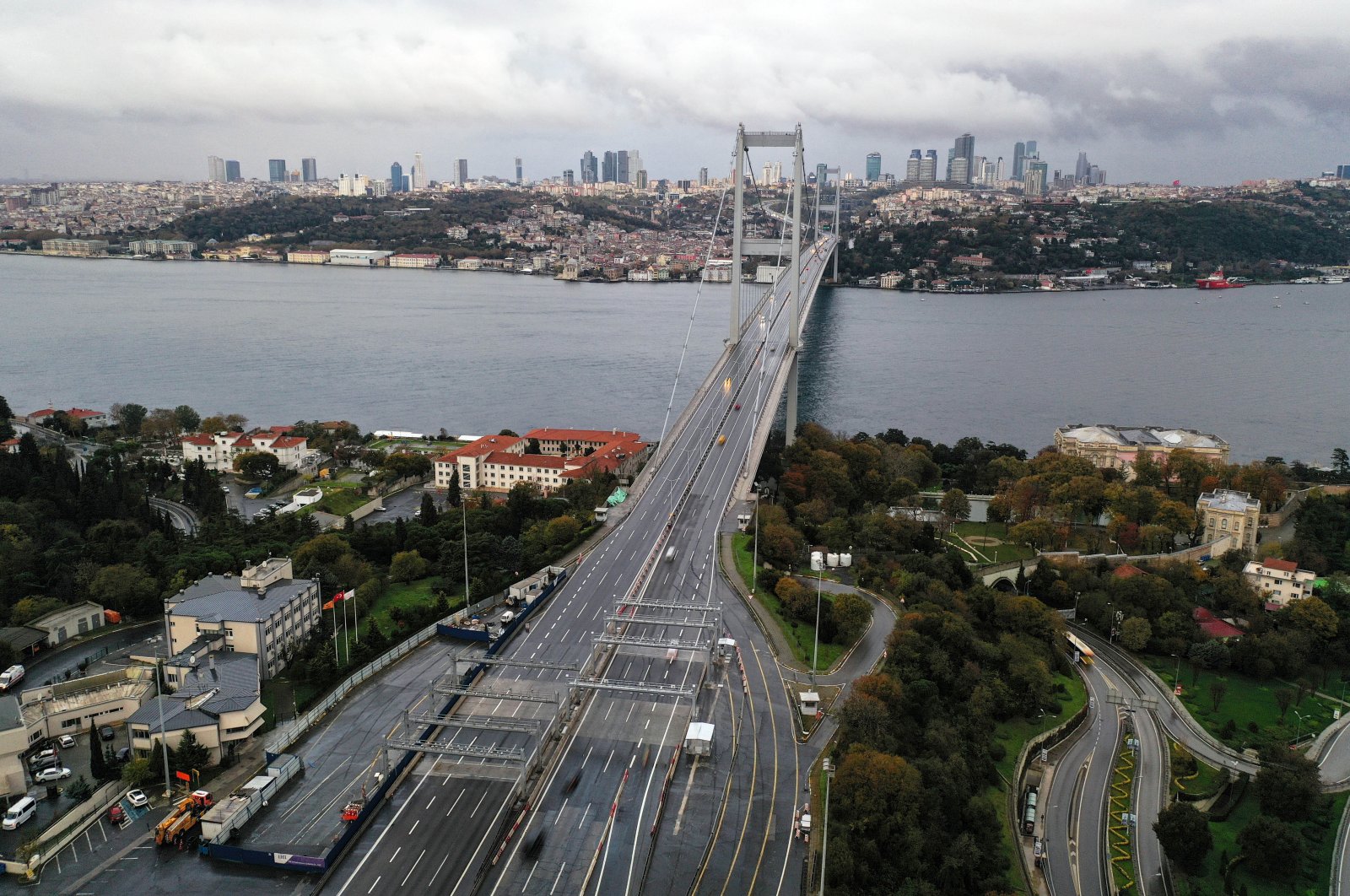 An aerial view of the July 15 Martyrs' Bridge, formerly known as the Bosporus Bridge, during a partial weekend curfew which was imposed to prevent the spread of the COVID-19, in Istanbul, Turkey, Nov. 22, 2020. (Reuters Photo)
by DAILY SABAH WITH AA May 31, 2021 1:33 pm
RECOMMENDED

Senior executives of large U.S.-based companies last week participated in a roundtable call with Turkish President Recep Tayyip Erdoğan where they revealed their confidence in the Turkish economy and emphasized that they are preparing new investments.

Erdoğan held an online meeting with the senior executives of 26 U.S.-based global companies on May 26 that was organized by the U.S. Chamber of Commerce, the Turkish Presidency's Investment Office, the Turkish Embassy and the Union of Chambers and Commodity Exchanges of Turkey (TOBB).

Erdoğan listened to company executives from sectors such as agriculture, energy, finance, health, informatics, tourism and aviation one by one during the meeting and answered their questions.

The company executives were cited by Anadolu Agency (AA) Monday as saying that they are focusing on establishing a deeper and more dynamic relationship with Turkey and on developing cooperation.

There is enormous potential with many opportunities for greater cooperation between the two countries in all areas of the economy, they added.

The executives also indicated a much higher trade volume in biliteral commercial relations can be reached thanks to the quality of products and services supplied from Turkey.

Turkey-U.S. trade reached about $21 billion in 2019 and the NATO allies have said they aim to lift that to $100 billion.

More than 1,700 American firms with total assets of $31.2 billion operate in Turkey and provide employment to 78,000 people.

Citing the commendable economic performance of Turkey during the global pandemic, the managers noted that they see Turkey as one of their most important markets with its durable economy and strategic location and that they want to develop their investment portfolios there as an indicator of trust.

The Turkish economy expanded 7% year-on-year in the first quarter of 2021, above market expectations, official data showed Monday. Turkey was one of the few countries where negative growth did not occur during the pandemic, as its economy grew by 1.8% in 2020.

Pointing out that they are optimistic about the performance and future of the Turkish economy, the managers expressed that they are pleased to be a part of the country's growth.

They also thanked the Turkish government and Erdoğan for the steps taken to improve the investment environment and expressed that they are proud of the partnership they have established with Turkey, which they described as a critical base and an important market.

“We want to invest more in your country. Turkey offers important opportunities for all sectors,” they said.

In his speech during the last week's call, Erdoğan thanked the companies that believed in Turkey and requested the U.S. corporate executives improve ties with the country.

The president said he believes his first in-person meeting with U.S. President Joe Biden in June will mark the beginning of a new era.

The two leaders are expected to meet on the sidelines of a NATO summit in Brussels on June 14.

Erdoğan also emphasized that Turkey and the U.S. should bring to life mechanisms for economic strategy and partnership, stressing the aim to bring the annual volume of trade between the two countries up to $100 billion.