Pressure grows for European Central Bank to respond to inflation 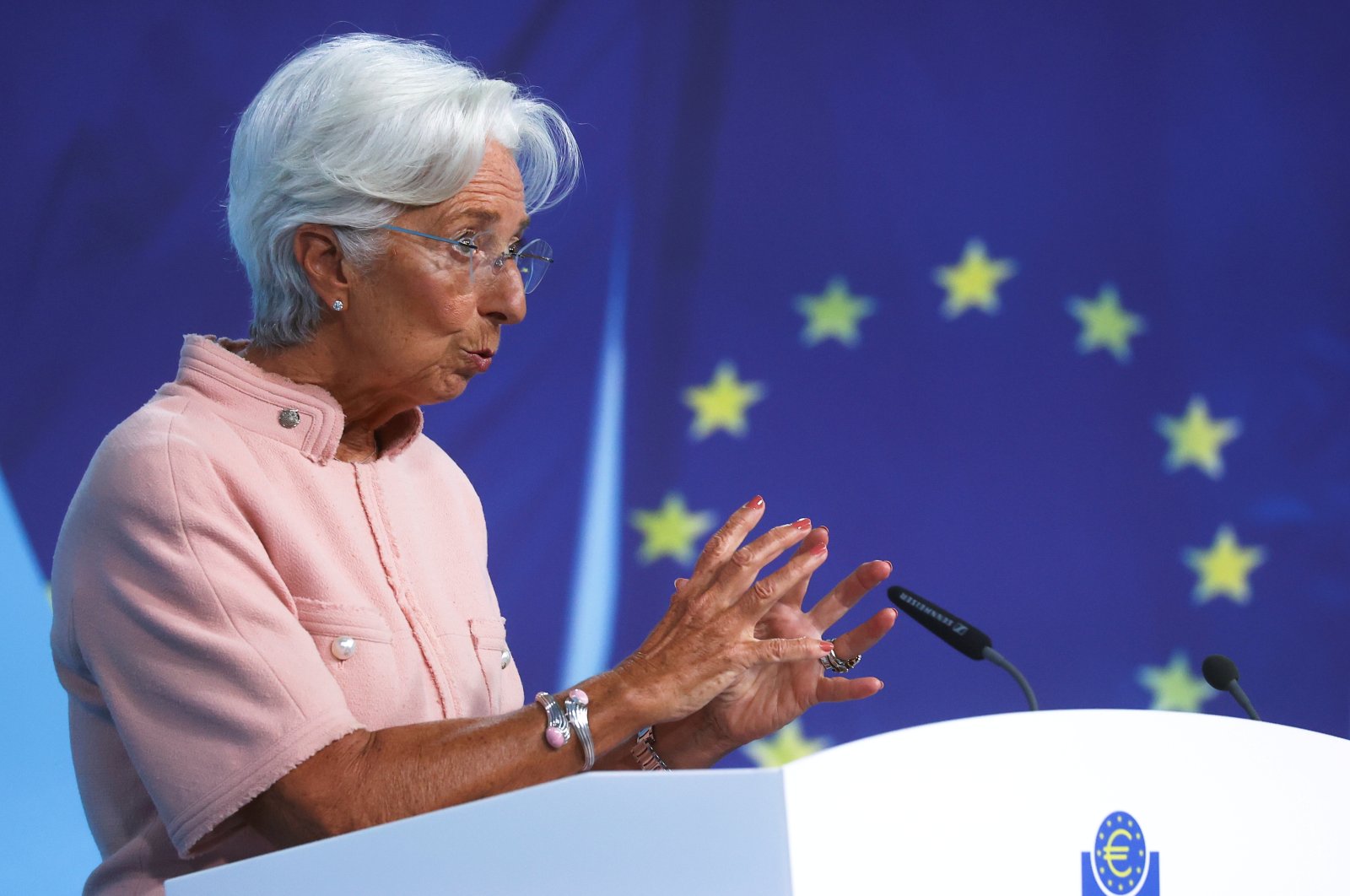 President of the European Central Bank (ECB) Christine Lagarde speaks as she takes part in a news conference on the outcome of the Governing Council meeting, in Frankfurt, Germany, Sept. 9, 2021. (Reuters Photo)
by French Press Agency - AFP Oct 25, 2021 10:26 am
RECOMMENDED

Eyes are now on the European Central Bank (ECB) as it is chartering a lonely route to respond to rising inflation in the eurozone, while the lender’s counterparts in the United States and the United Kingdom signal willingness to take action.

ECB policymakers will meet Thursday, with markets hoping for hints on when the bank might start raising historically low interest rates or tweak the pace of bond buying under its massive pandemic-era stimulus program.

Bottlenecks have pushed up prices and pinched industrial production in the eurozone, drawing a tightrope for policymakers to walk as withdrawing stimulus to quash inflation risks further crimping the economic recovery.

In September, prices in the euro area rose 3.4% year on year, a 13-year high pushed by the cost of energy, and well above the bank's 2% target.

At the same time, material shortages linked to the pandemic have stalled the economic recovery in parts of the eurozone.

Eurozone business sentiment in October was at its lowest point since April, according to an IHS Markit survey published last week, with shortages being felt particularly in European powerhouse Germany and its vital automotive sector.

President Christine Lagarde has however said the ECB would not "overreact" to what the bank's economists see as "transitory" inflation driven by one-off pandemic effects.

At the end of September, the heads of the world's biggest central banks came together at the ECB's monetary policy summit to discuss the problems facing them.

The U.S. Federal Reserve (Fed) was "getting closer" to meeting its targets to start winding down its own stimulus program, its chair Jerome Powell said in a panel discussion with Lagarde and colleagues from the U.K. and Japan.

Members of its policymaking committee also expect the Fed to start raising interest rates at the end of 2022 – a prospect that has yet to officially materialize at the ECB as the bank's medium-term inflation forecasts continue to sit below its target.

The Bank of England governor Andrew Bailey said in mid-October that his institution "will have to act" on inflation, bringing forward expectations of a rise in interest rates.

Other central banks within the European Union have responded aggressively to rising prices.

The Polish central bank hiked interest rates at the beginning of October for the first time in almost a decade, while its Czech counterpart raised rates sharply in September to tame soaring inflation.

Despite some dissent among members of the governing council, the ECB seemed "pretty zen," said Bruno Cavalier, economist at Oddo.

In a letter last week announcing his resignation to colleagues, Jens Weidmann, the president of the German central bank and a prominent advocate of tight monetary policy, said it would be "decisive" for the ECB's strategy "not to lose sight of future inflation risks."

Upward pressure on prices would, however, "largely fade out over the course of next year," Isabel Schnabel, who sits on the executive board of the ECB, said earlier this month.

The ECB has long held its interest rates at historic lows, including a negative bank deposit rate that means lenders pay to park excess cash at the ECB.

While markets are pricing in a small rates rise in 2022, analysts at ING doubted that the first increase would come "before late 2023."

The ECB's 25-member governing council left interest rates untouched, but dialed back its bond-buying scheme at its last meeting in September.

The expectation is that the scheme will end in March, but ideas are percolating amongst observers and the central bank's policymakers as to how existing schemes could be modified to maintain support.