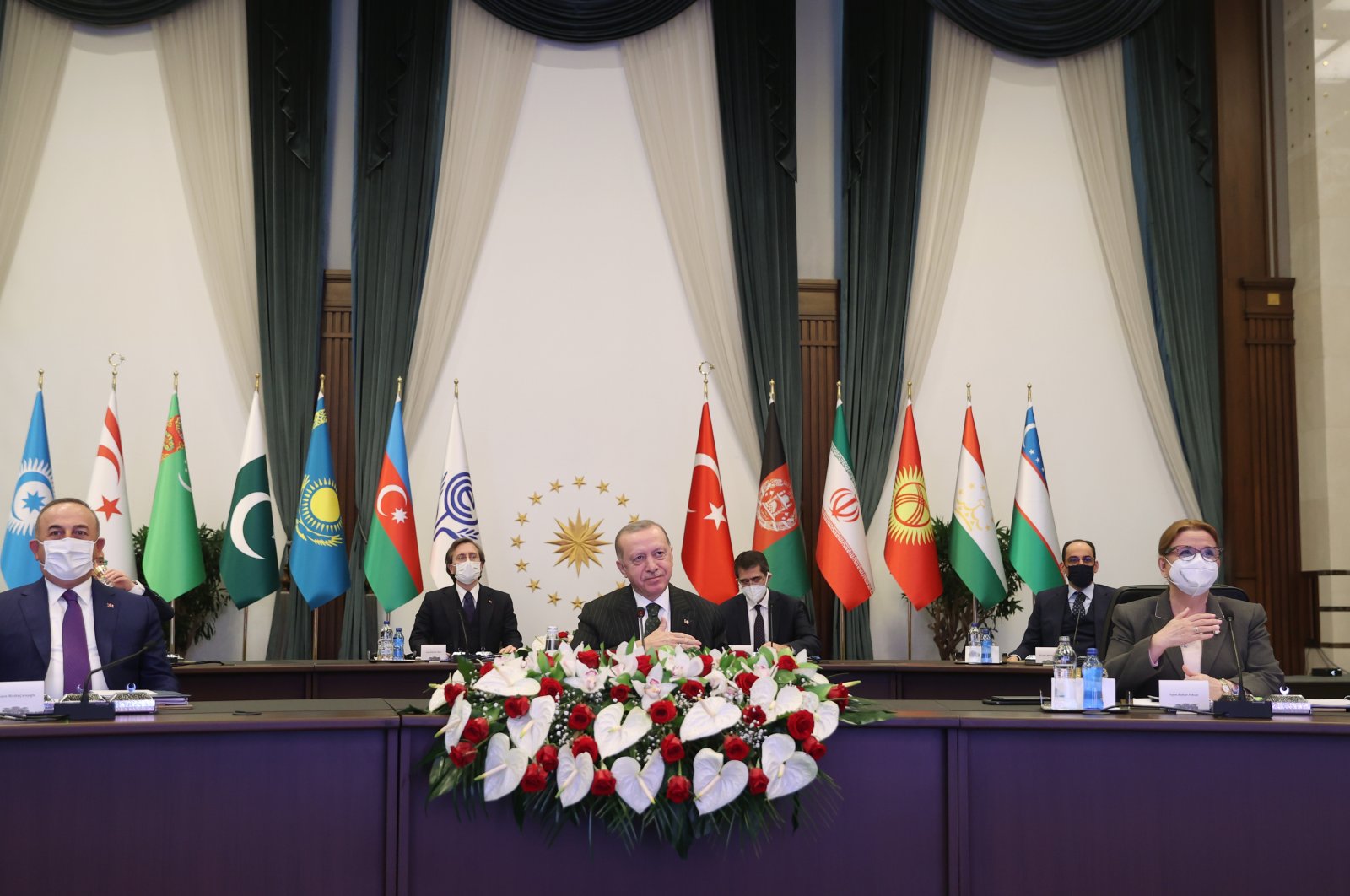 Turkey on Thursday urged for the trade deal between member countries of the Economic Cooperation Organization (ECO) to be put into action as soon as possible.

Addressing ECO’s virtual 14th Leaders Summit, President Recep Tayyip Erdoğan also called for the members to develop their ties with the Turkish Republic of Northern Cyprus (TRNC) and urged for the lifting of U.S. sanctions on Iran.

“Putting into action the Economic Cooperation Organization Trade Agreement (ECOTA), which has not been put into force for 17 years, without wasting time will be beneficial,” Erdoğan noted.

Turkey is one of the founding members of the Eurasian political and economic intergovernmental organization, which was established in 1985, along with Iran and Pakistan.

In 1992, the organization expanded to include seven new members including Afghanistan, Azerbaijan, Kazakhstan, Kyrgyzstan, Tajikistan, Turkmenistan and Uzbekistan.

Erdoğan said they find important China’s Belt and Road Initiative (BRI), coined by Chinese President Xi Jinping in 2013, and acknowledged that they support the initiative on the basis of the “win-win” principle.

Inspired by the historical Silk Road, BRI is an ambitious program to connect Asia with Africa and Europe via land and maritime networks along six corridors to improve regional integration, increase trade and stimulate economic growth.

The president also noted the importance of Ecobank, an Istanbul-based regional financing body for trade projects, calling for countries that have not yet become members to join.

Erdoğan stressed they have gained major ground with infrastructure projects in the transportation field.

The president also called for stronger solidarity amid the coronavirus pandemic.

“Only through strong solidarity and regional and international cooperation can we win the fight against this global catastrophe,” Erdoğan noted.

“Tourism and travel sectors have been one of the sectors where the effects of the pandemic have been felt the most around the world.”

He said a number of measures were enacted to minimize the effects of the outbreak.

“We have already begun preparations for 2021 to be a year in which losses in terms of the tourism sector are more than compensated,” Erdoğan added.

On the other hand, the president also called on ECO member countries to strengthen their relations with the TRNC in every area.

“I called on all our members to develop their relations with TRNC and help it overcome the injustices it has been experiencing,” Erdoğan said.

The island of Cyprus has been divided since 1974 when a Greek Cypriot coup aimed at Greece’s annexation of the island was followed by violence against the island’s Turks and Ankara’s intervention as a guarantor power.

Erdoğan also touched upon the Karabakh region, saying that their primary aim as of now would be to help ensure security and stability in the region.

“Our priority is to repair the damage left by the 30-year occupation,” the president noted.

During the six weeks of conflict, Azerbaijan liberated several cities and nearly 300 settlements and villages from the Armenian occupation.

The two countries signed a Russian-brokered agreement on Nov. 10, 2020, to end the fighting and work toward a comprehensive resolution.

“We believe that Armenia would support regional stability with peaceful steps,” Erdoğan said.

In his address, the president also said that lifting U.S. sanctions on Iran over its nuclear work and returning to a 2015 nuclear deal will contribute to regional stability and economic prosperity.

Tehran and Washington have said they want the other side to move first to hold talks to salvage the Joint Comprehensive Plan of Action (JCPOA), under which Tehran secured an easing of sanctions by limiting its nuclear work.

Last month, Erdoğan told Iranian President Hassan Rouhani in a phone call that he saw a window of opportunity for Iran and the United States, adding he wanted U.S. sanctions on Tehran to be lifted.