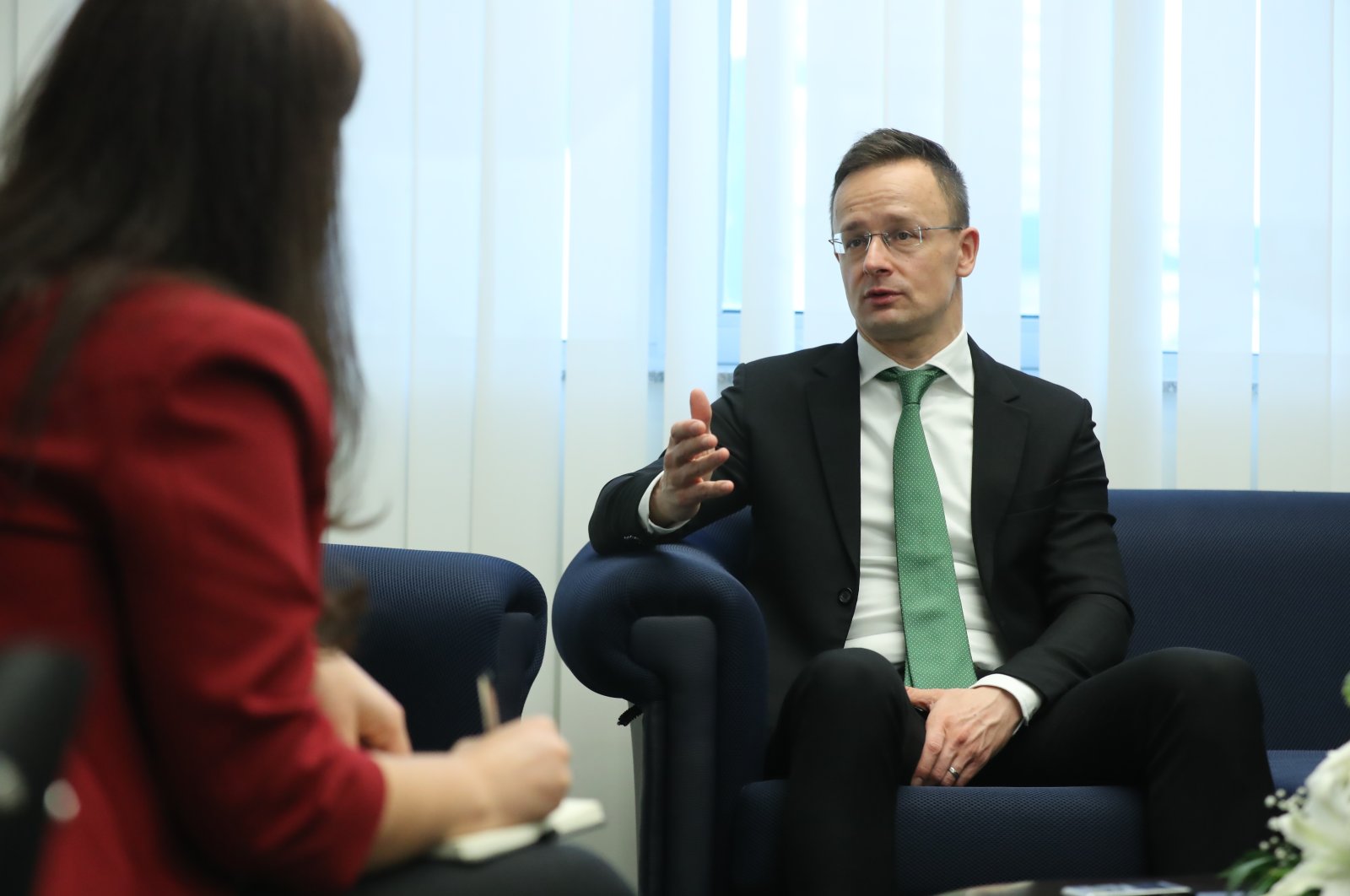 Hungarian Minister of Foreign Affairs and Trade Peter Szijjarto during an interview with the Sabah daily, the capital Ankara, Turkey, Feb. 8, 2021. (Sabah Photo)
by Betül Usta Feb 11, 2021 10:56 am
RECOMMENDED

Turkey is a strategic European Union ally that helps the bloc's security and stability and provides diversification of energy resources, Hungarian Minister of Foreign Affairs and Trade Peter Szijjarto said on Monday.

Speaking to Sabah daily, Szijjarto underlined the importance of Turkey for the EU regarding its efforts stemming migration flows and trade with the bloc.

“We are in favor of modernization of our customs union with Turkey. Because of COVID-19, a new global economic period will start, and this period increases the significance of international trade cooperation,” Szijjarto said, indicating that Turkey is one of the top growing economies in the world and that the EU cannot afford not to be engaged in a close and strategic economic and trade relationship with Ankara, “especially under these circumstances.”

“Everything that makes trade and economic cooperation with Turkey tighter is good,” he added. “We do believe that modernization of the customs agreement helps tightening and strengthening relations.”

As part of efforts to turn a new page with Europe, Ankara has been calling on the bloc to update the EU-Turkey customs union, a trade agreement that came into effect on Dec. 31, 1995. On March 6, 1995, the European Community-Turkey Association Council decided to implement an association between the two parties in which goods could travel between the two entities without any customs restrictions. The union does not cover essential economic areas such as agriculture, services or public procurement.

The foreign affairs and trade minister also touched on bilateral fields of cooperation and commerce, reminding that both countries set a trade volume goal of $6 billion six years ago. Szijjarto also underlined that Hungary-Turkey ties have great trade and investment potential.

“We have been able to perform 6% growth of trade volume last year, even though the circumstances were not very positive because of the COVID-19 pandemic,” he elaborated, adding that there has also been similar growth in investments in both countries.

As part of Szijjarto's visit this week, Hungarian medical device manufacturer Medicor on Monday announced a 2 million euro ($2.4 million) investment in Turkey. It will produce incubators in the second organized industrial zone (OIZ) in the Turkish capital Ankara.

Szijjarto cited other fields of cooperation – including defense, health care, transportation, education and culture – saying he planned to organize a Hungary-Turkey cultural year.

He also said that a partnership in space technologies could be another field in which Ankara and Budapest can work together, saying his country already has experience after working with both the European Space Agency and Russia.

President Recep Tayyip Erdoğan has frequently voiced Turkey’s goal of increasing its satellite technology beyond observation and communication, focusing on the fact that the future is in space.

The program was prepared and will be carried out by the Turkish Space Agency (TUA), established in 2018 with the aim of joining the handful of other countries with space programs.

“We have one additional strategic common goal, which is Hungary's involvement in training your upcoming future nuclear engineer and nuclear experts,” Szijjarto said, indicating that his nation has been using nuclear energy for over 40 years and has a long-standing tradition in the field.

Underlining that both Turkey and Greece are NATO allies, Szijjarto said Hungary hopes their conflict can be resolved peacefully and welcomed the latest talks between Ankara and Athens.

Regarding the EU sanctioning senior officials of Turkey’s state-owned Turkish Petroleum Corporation (TPAO) for its drilling activities in the Eastern Mediterranean, the minister said that it also harms “our national interest.” Hungarian oil and gas company MOL is working with the TPAO in different locations including in Russia and Azerbaijan, he said, adding that TPAO sanctions affect MOL as well.